Home » Lifestyle » Kevin Rudd didn’t write his US-China book for us. That’s why you should read it

Kevin Rudd is an optimist. Which is quite the feat for anyone writing about the downward spiral in relations between China and the United States in recent years – let alone for Rudd, the Mandarin-speaking diplomat-turned-Australian prime minister at times angrily torched by both countries.

But before we get to Rudd’s view about the risk of a coming war (“a real possibility”), nuclear confrontation (“must be considered afresh”), economic self-sabotage (“Xi’s real political vulnerability”) or cyber catastrophe (“rapidly accelerated”), take a moment to consider one delightful scene he briefly relays. 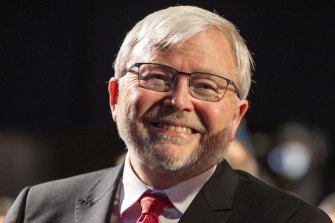 The man who would become China’s leader – ruling a closed communist regime controlling more than a billion people – swaying on a vacant stage of the Sydney Opera House, belting out a tune. Not Xi Jinping. China’s president might be “confident, self-assured and instinctively assertive”, as Rudd describes, but he comes across ultimately as dour and insular. The man in that empty hall was instead a predecessor, Jiang Zemin. It was a very different time, the late 1980s, before Tiananmen, artificial islands, foreign interference accusations and COVID-19, when a much younger Rudd was a foreign affairs official hosting a Chinese delegation to Australia and Jiang wanted to have some simple fun.

But you can see how this experience – or one that Rudd tells from years later about a boozy dinner late into the night with a group of Chinese generals who admitted a “high degree of military caution” about the prospect of fighting a war in Asia – can give hope that peaceful accommodation might somehow be reached.

Rudd hasn’t written this book for Australians and that is exactly why Australians should read it. This is not a political screed or point-scoring exercise in domestic battles. Sure, there are familiar Ruddisms expressed. The word “core” gets a particular workout to explain interests or principles. But the book amounts to a thoughtful and well-structured examination of the dynamics between the world’s greatest power and its greatest challenger, the consequences of which Australians cannot escape, but can seek to shape. 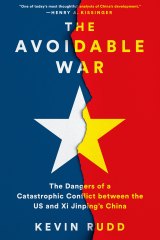 The Avoidable War by Kevin Rudd.

Americans are Rudd’s target audience who he chides for complacency about China’s rise. It was long assumed, not only in the US but in Australia, too, that as China became rich a new middle class would demand the freedoms of Western democracies. Alarms are now ringing in America’s political system about China’s ambitions. Only this has led to a new fatalism that conflict is inevitable. The fate of Taiwan features throughout as a flashpoint.

The hopeful tone that permeates Rudd’s analysis is a belief this rivalry can be ultimately managed. And must be managed because the cost of open warfare would be extraordinary. Rudd’s concern is that Beijing’s motivations and intentions are not at all well understood in Washington. Both countries are talking past one another, leading to dangerous misapprehensions.

Rudd’s solution is essentially for two powers to furiously compete to enhance their appeal – in technology, economy and diplomacy – but agree not to fight. That would require a foresight and deliberate statecraft which is hard to imagine. Rudd’s challenge to sceptical experts is to offer a better alternative. He focuses heavily on Xi, drawing on his own conversations with China’s leader, detailing what he sees as the priorities in the country’s deliberately opaque politics. Even should Xi suddenly disappear he believes these goals would largely remain.

What Rudd doesn’t much consider is the idea that a radical shift in US policy might be cemented should Donald Trump or another leader of his ilk return. The emphasis put on environmental goals is encouraging, making the point had Xi walked away from the Paris Accords with Trump, what little co-ordinated global action the world has on climate change would have collapsed.

The advance of the Quad grouping, involving Australia, the US, Japan and India, and its possible expansion to include South Korea, maybe even Indonesia, has caught China somewhat by surprise. Rudd remains sceptical of India’s alignment – borne out by the equivocal stance India has taken following Russia’s invasion of Ukraine, which took place after the book went to print.

Still, a focus on China and the US does risk underestimating the ability of India, with its own growing heft, to carve a different path altogether.

But amid the gloomy forecasts of coming conflict, a reminder that a course to war is never set, marks hope enough.

The Avoidable War by Kevin Rudd is published by Hachette, $34.99.

Daniel Flitton is editor of the Lowy Institute digital magazine The Interpreter and was previously diplomatic editor at The Age.