Labor’s candidate for the key electorate of Higgins in Melbourne has apologised after making a post suggesting the Prime Minister could be responsible for the suicide of a Sydney doctor because of his management of the pandemic and health system.

Michelle Ananda-Rajah, an infectious diseases expert, said on Twitter of the doctor’s death: “you can’t rule in or out the impact of working in an overwhelmed hospital system.” 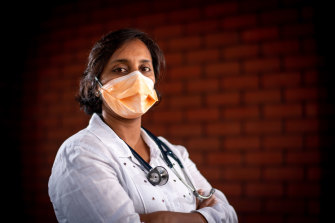 She said the state of the hospital system was the fault of Scott Morrison and his government, because of what Labor says are failures to deploy coronavirus vaccines fast enough, create a leak-free quarantine system, and aid healthcare workers sufficiently.

But on Thursday evening Dr Ananda-Rajah removed the tweet. “I regret and apologise for any hurt caused which was motivated by the exhaustion and frustration that I, like so many of my healthcare colleagues, feel in this difficult time,” Dr Ananda-Rajah said.

She reiterated her criticism of federal healthcare funding and said she would keep advocating for healthcare workers.

“These would be troubling from any health professionals but even more so from someone seeking office,” Mr Hunt’s spokeswoman said. “The ALP may wish to reconsider whether this person is an appropriate and credible representative for them.”

Labor leader Anthony Albanese’s office did not immediately respond to a request for comment on behalf of the Opposition Leader or Dr Ananda-Rajah.

After a slow start, Australia is now pushing towards a 90 per cent vaccination rate and some states are trialling home quarantine but the Commonwealth is locked in a dispute with the states over health funding.

Dr Ananda-Rajah’s opponent at the next election is Katy Allen, another doctor and the sitting Liberal member for Higgins, who has been a determined advocate for the AstraZeneca vaccine.

All eight states and territories have urged the federal government to increase their health funding, arguing that they need more cash for hospitals increasingly under strain from coronavirus cases that could rise as the country comes out of lockdowns.

“We are entering into the most critical phase of the COVID-19 pandemic response for our hospital systems,” health ministers said in a letter to Canberra in late September.

Under regular funding arrangements, the Commonwealth pays 45 per cent of the cost of running public hospitals and the states contribute 55 per cent.

Mr Hunt and Mr Morrison have rejected the states’ request for an immediate extra funding injection, saying health departments had 18 months to prepare for more cases and pointing to more than $30 billion the Commonwealth has already contributed to the pandemic response.

“NSW and Victoria have been able to plan for the COVID surge, they’re in the middle of it, they have the same funding arrangements as any other state and territory, but they’re dealing with it,” Mr Morrison said last week. “So, this isn’t about funding. This is about management of hospital systems. States must run their hospital systems well.”

Our Breaking News Alert will notify you of significant breaking news when it happens. Get it here.