Sunshine State of mind! Mother-of-two Lara Trump shows off INCREDIBLE abs in a bikini while relaxing with drink in hand on the lawn at Mar-a-Lago

It didn’t take Lara Trump long to settle in to Florida life after leaving behind chilly Washington, D.C. for the sunny serenity of her father-in-law’s Mar-a-Lago resort, where she was seen kicking back in a bikini on Thursday – just 24 hours after skipping the inauguration in favor of fleeing to the sunshine state with her in-laws.

The mother-of-two, 38, showed off her incredibly athletic physique while strolling around the sprawling grounds of the resort in a white bikini and brown flip flops, topping off her look with a pair of large sunglasses, a green visor carried in the crook of her arm and – the ideal accessory for any getaway – a drink in her hand.

Despite her idyllic surroundings, Lara seemed in a pensive mood, and she failed to raise a smile while walking across the grass – although she did pause at one point to stretch her legs.

Beach ready: Lara Trump put her incredible six-pack on show while strolling around Mar-a-Lago on Thursday 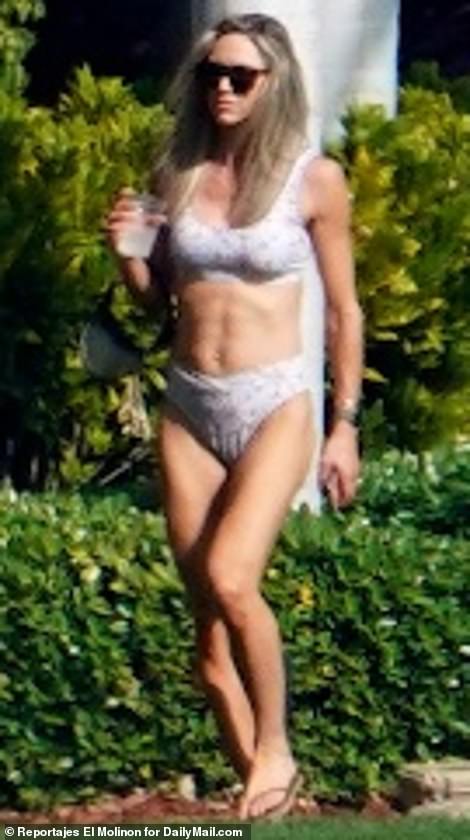 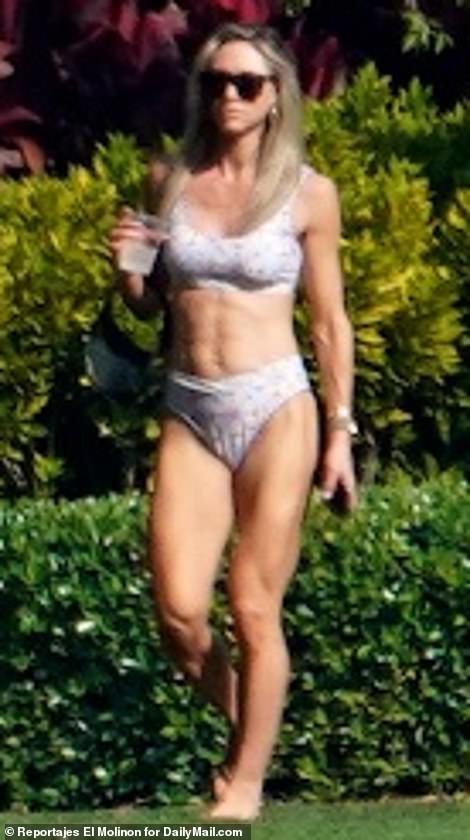 Shady lady: The 38-year-old shielded her eyes from the sun with a large pair of sunglasses, and she carried a green visor in the crook of her arm 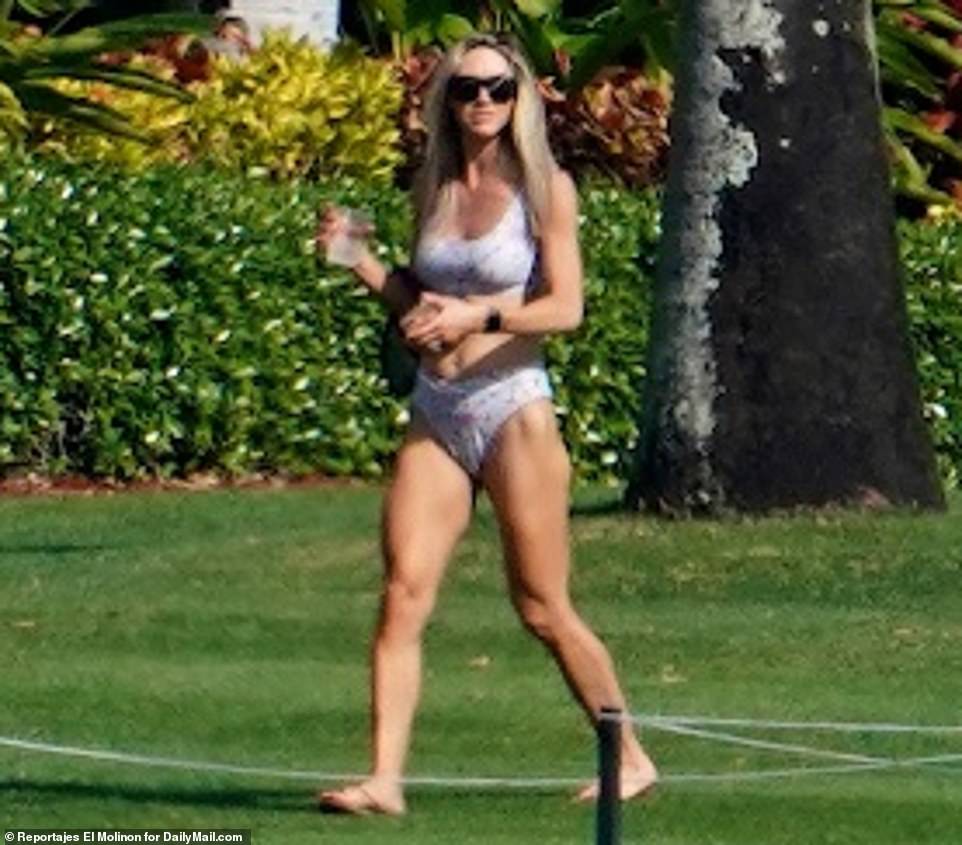 Out of office! Mother-of-one Lara was also seen carrying a drink in her hand as she made her way across the sprawling property, where she and the Trump family are hunkering down in the wake of Donald’s presidency coming to an end 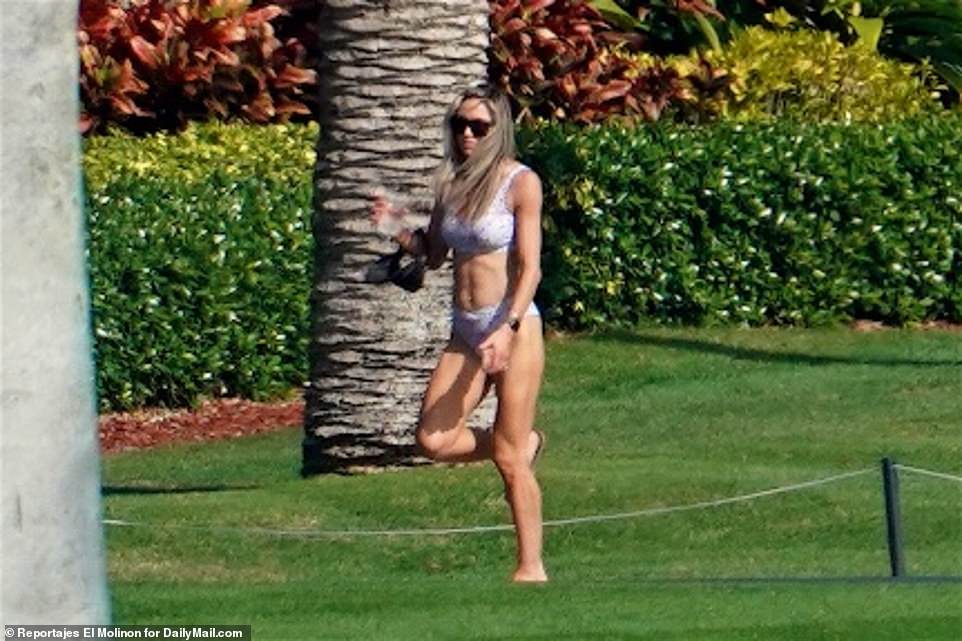 On the move: Lara, who is known to be a keen runner, looked fit and toned in her two-piece swimwear, having clearly managed to maintain her workout routine even with all the craziness of the election

As Trump’s daughter-in-law enjoyed the sunny weather at the resort, Donald himself was pictured heading out for a round of golf on the West Palm Beach course – while wearing his trusty red MAGA hat – on his first full day as a private citizen.

Although she did not join him for a round, it is likely that Lara and Donald will be spending plenty of time together in the coming weeks, along with the rest of the Trump family members who are in Mar-a-Lago, as they all take time to process the end of their time in D.C.

For her part, Lara certainly looked to be in full Florida mode as she strolled along wearing nothing but her white patterned two-piece.

Lara’s flattering bikini was a world away from the demure look she modeled at Joint Base Andrews on Wednesday when she joined her husband and his siblings to support Donald as he made his final speech as President.

The former TV producer donned a thick black turtle neck and skirt for the event, which she layered under a classic camel coat, before adding a pair of elegant black high heels.

She and her in-laws made the decision not to attend the inauguration of President Joe Biden, instead showing their support for Donald as he bid farewell to his presidency with a final public address.

Mom-of-two Lara, who has a son Luke, three, and daughter Carolina, one, stood by her husband Eric’s side as Donald and his wife Melania took to the stage at the event to speak to a crowd of supporters.

While Trump addressed the several hundred people who had gathered – telling them that ‘we will be back – in some form’ – several of his children appeared overwhelmed with emotion; Ivanka, 39, Don Jr., 43, Tiffany, 27, and Lara’s husband Eric were all seen tearing up during the speech.

Although Lara did not appear to shed a tear, she seemed aware of the weight of the occasion, maintaining a very somber expression while her father-in-law spoke, although she later flashed a wide smile at the waiting photographers.

The Trumps are the first President and First Lady to snub his successor’s inauguration since the 1800s. While they landed in Florida, the Obamas, Bushes and Clintons watched in awe as Jennifer Lopez and Lady Gaga serenaded a crowd of 1,000 at the Capitol before Joe Biden and Kamala Harris were sworn in.

It is unknown what is next in store for Lara and Eric; unlike the other Trump siblings they are not understood to be looking for property in Florida, although they are thought to be planning to stay at Mar-a-Lago while the family hunkers down in the wake of President Joe Biden’s inauguration. 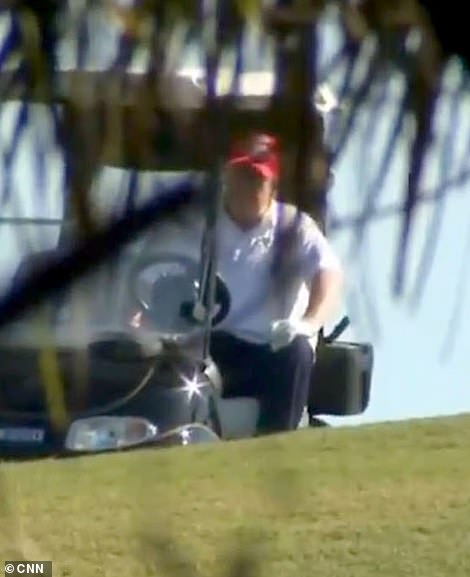 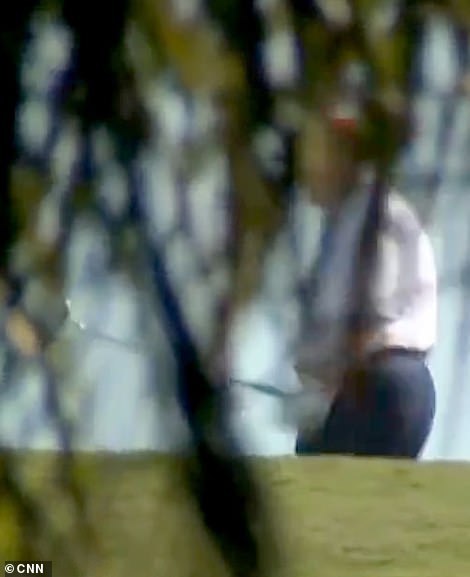 Look who it is! While Lara soaked up the sun at the resort, Trump was seen playing golf on the course in West Palm Beach – while wearing his trust red MAGA hat 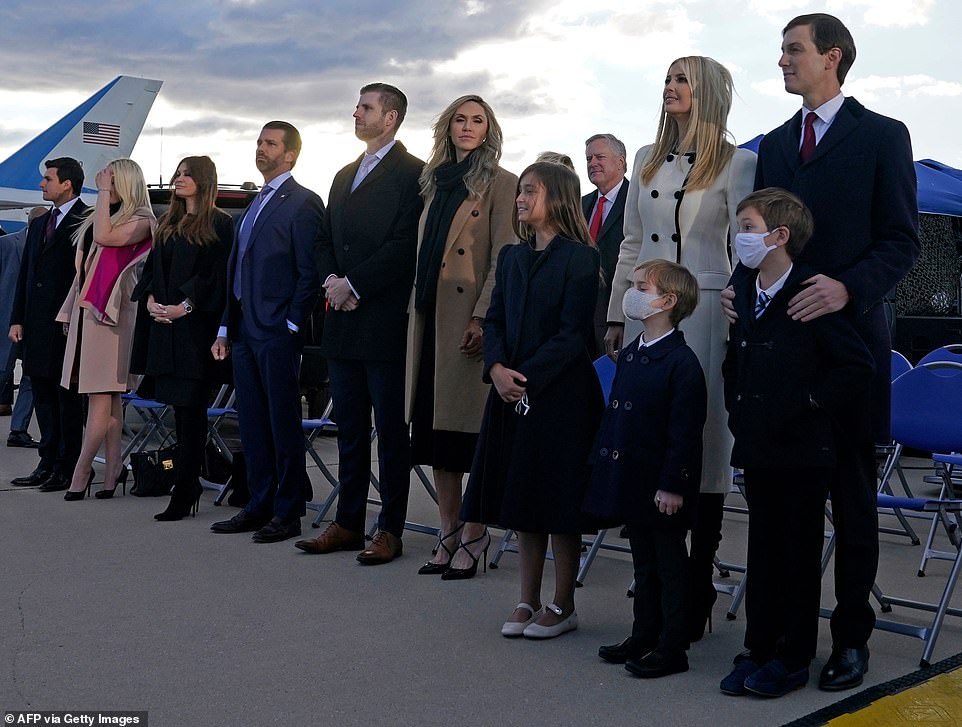 Family: Lara was by her husband’s side as he, his siblings, and their respective partners supported Donald Trump in his final speech as President 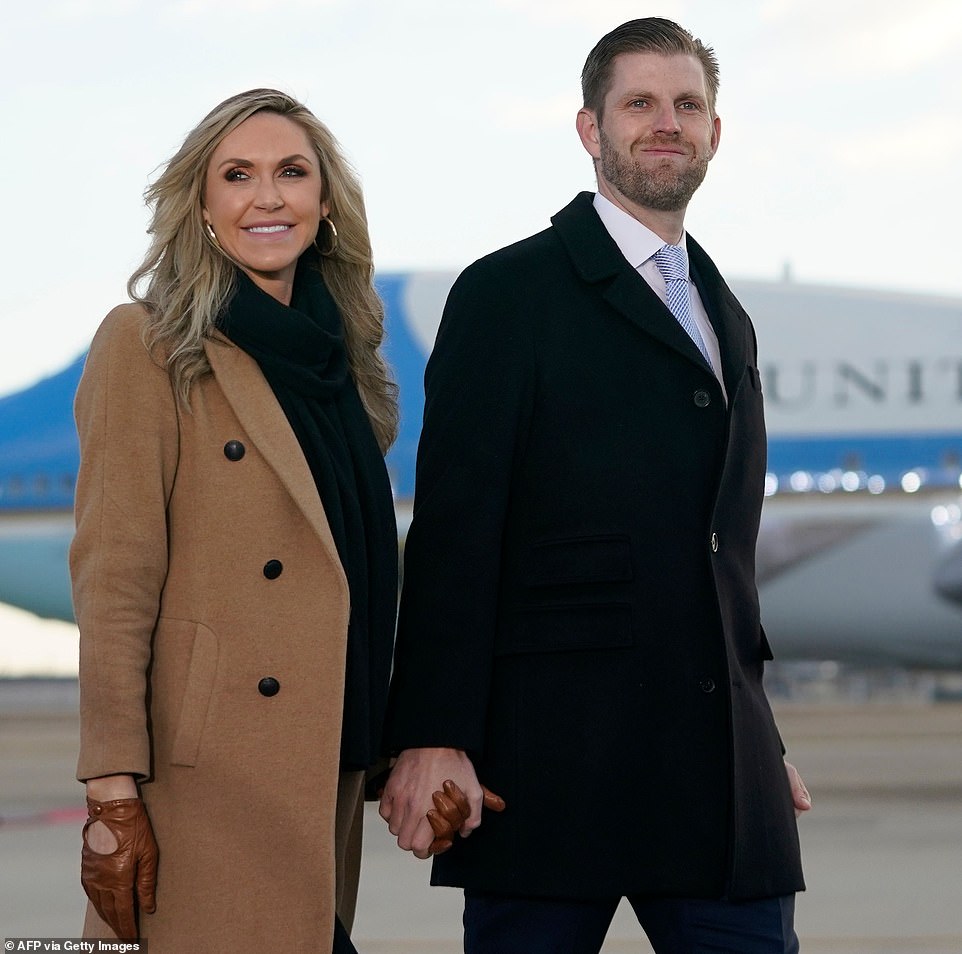 On their way: Eric and Lara held hands as they arrived at the event at Joint Base Andrews – where they later took off on a flight bound for Florida 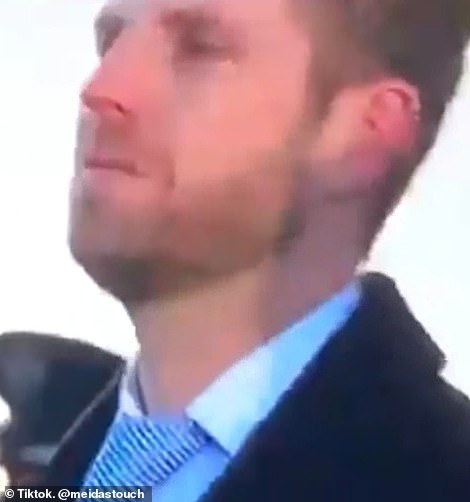 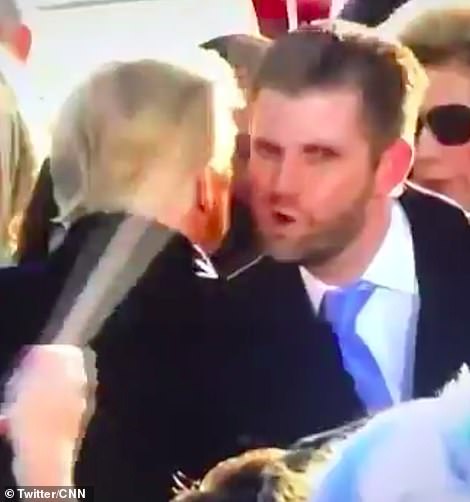 Upset: Eric’s eyes appeared to fill with tears while he watched his father make his final speech – and he later became the butt of several social media jokes when he tried to kiss Donald on the cheek but ended up puckering up inches away from his face

The couple have long been based in New York City, where they currently live with their two children, and it is unclear whether they are planning to try and return to Manhattan life.

Interestingly, Eric’s sister Ivanka and her husband Jared are thought to be making a move to Florida after it was made clear that they would no longer be welcome in the elite social circles they once ran in while living in the Big Apple prior to Trump’s election.

However Eric and Lara maintained a more low-key profile while living in the city, and did not relocate to Washington, D.C. as Ivanka and Jared did early on during Trump’s presidency, so it may be that they have more of a chance of infiltrating them back into full-time New York life.

They may well find the city to be a lonely place however, with Ivanka and Jared looking set to leave, as well as Don Jr. and his girlfriend Kimberly Guilfoyle.

Senior White House advisers Ivanka and Jared have reportedly purchased a $31 million plot of land on Miami’s ‘Billionaire Bunker’ and are believed to be building themselves a home in the exclusive neighborhood.

Jared’s brother, Joshua Kushner, and his model wife Karlie Kloss – who is expecting their first child – have also bought a home in Florida. 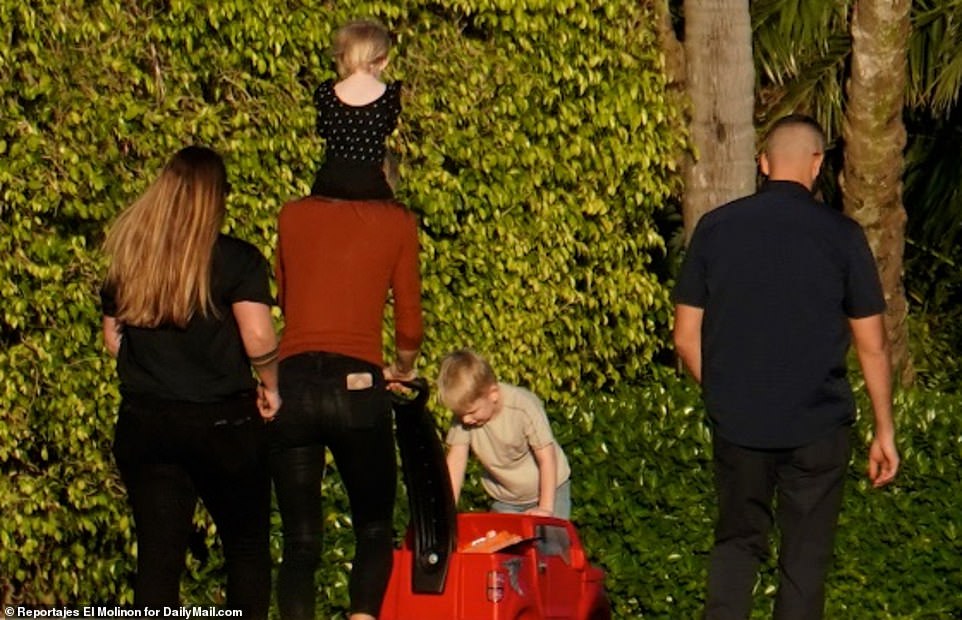 Chilling: Lara was seen spending time at Mar-a-Lago with her children, Luke and Carolina, on Tuesday, before she flew into D.C. for Trump’s final speech 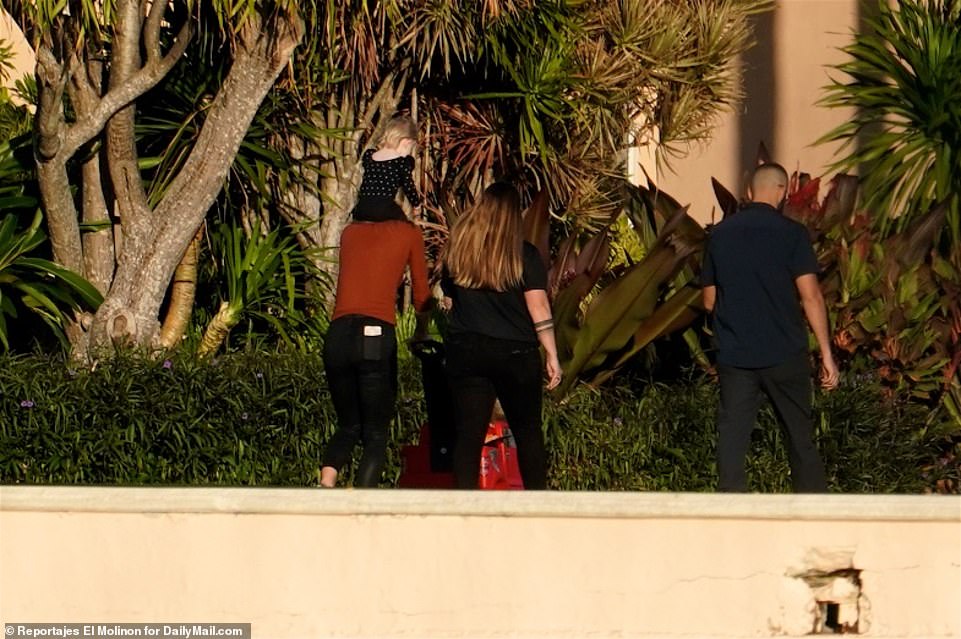 Playtime: The mother-of-two is thought to have left her children at Mar-a-Lago in the care of nannies while she and Eric were in D.C. for a few hours 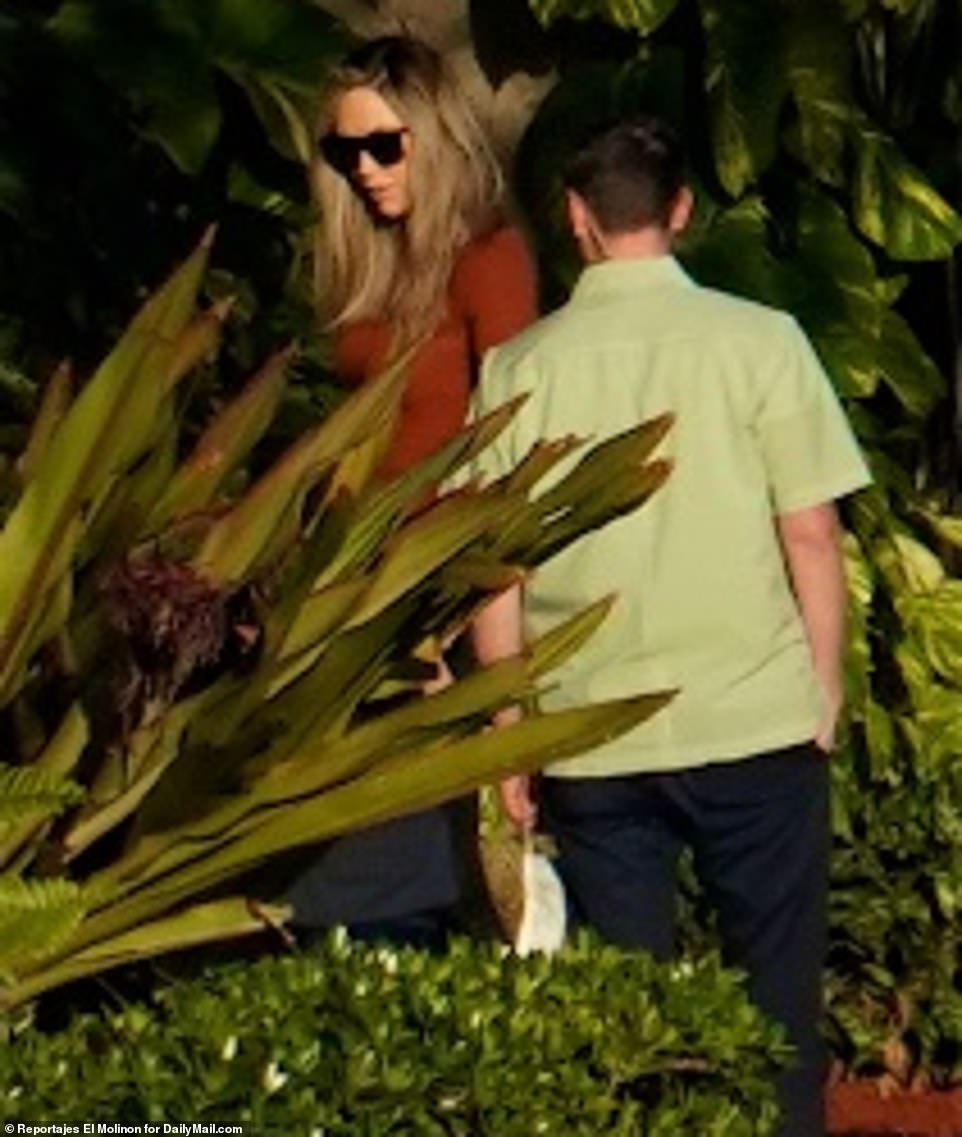 Flying solo? Eric was not seen with his wife at Mar-a-Lago on Tuesday, and it is thought he may have already been in D.C. with his family

Youngest Trump daughter Tiffany is also said to be looking for a property in Miami with her new fiance Michael Boulos.

Lara has certainly been making herself at home at Mar-a-Lago this week; she was pictured soaking up the final hours of sun on the property with her children on Tuesday evening, less than a day before she flew back to D.C. for her father-in-law’s farewell.

Wearing a long-sleeved burnt orange shirt and black jeans, Lara looked casual and relaxed as she spent time with Luke and Carolina, and at one point was seen carrying her daughter on her shoulders in a sweet gesture.

Blonde-haired Luke seemed to be having a whale of a time while playing with a red toy car, which his mother was later seen pushing him around in as they strolled across the lawn, accompanied by two personnel who appeared to be security and a nanny.

Eric was not seen with his wife in Florida earlier this week, and it is thought that he had already gone ahead to D.C. to be with his family during Trump’s final hours in office, before being joined by Lara who flew in just in time for Trump’s parting speech.