The Morrison government passed a bill through the lower house last week that would give state governments control of major project assessments under the Environment Protection and Biodiversity Conservation (EPBC) Act. But it came under fire for its omission of national standards to ensure states did not weaken environmental protections. 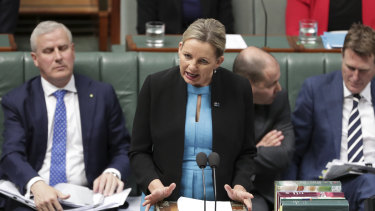 Federal Environment Minister Sussan Ley is consulting on deals with the states that could come ahead of the national standards. Credit:Alex Ellinghausen

The bill is set to be debated in the Senate when Parliament resumes next month.

Speaking at The Sydney Morning Herald Sustainability Summit on Monday, Ms Ley said project approval powers would not be handed from federal to state governments until they had shown their assessment regimes met the requirements of Commonwealth law. She reiterated she would pursue further changes through Parliament to bolster environmental protections.

"I like to say it's the status quo or better. And over time, it will definitely be better," she said.

Bilateral deals where approval powers were devolved "allows the Commonwealth to send that work to state governments but only if the standards that I've talked about … are met", she said.

Ms Ley is consulting on deals with the states that could come ahead of the national standards, which would police impacts from project development on threatened species and habitats as well as world heritage areas.

"No state is going to secure the right to make approvals without signing up to binding Commonwealth-led national standards as part of the bilateral agreement and without showing that it can meet the provisions of the agreement," Ms Ley said.

Labor environment spokeswoman Terri Butler said the government had "rammed" changes through Parliament ahead of the final report of a review of the EPBC Act, due next month.

Former Australian Competition and Consumer Commission chairman Graeme Samuel, who led the year-long review, is consulting with government and experts to develop proposed national standards. His interim report found the law was "ineffective and inefficient".

"They have ignored their own independent review which said that national environment standards were the foundation for any reform," Ms Butler said. "Standards with broad buy-in would be more durable.

"The Morrison government is saying to the Australian people trust us, we'll do this later. They want to devolve decision making powers to the states right now and then some time at an unknown future point they'll bring in national standards."

When asked at Monday's summit if the environment would be improved in this term of government, Ms Ley cited the challenges of "200 years of white European settlement" but pledged that "our protections as a Commonwealth government will be more secure as the result of our environmental reforms".

Our weekly newsletter will deliver expert analysis of the race to the White House from our US correspondent Matthew Knott. Coming soon. Sign up now for the Herald‘s newsletter here, The Age‘s here, Brisbane Times‘ here and WAtoday‘s here.