Home » Lifestyle » Martha Wainwright on new love: ‘I got naked right away when I saw you’ 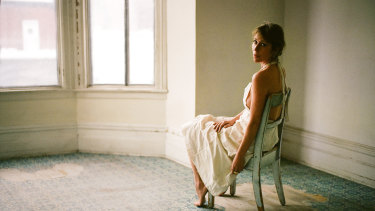 Martha Wainwright is more than willing to expose her emotional nerve-endings.Credit:Gaelle Leroyer

In the video for the title track of her fifth album, Martha Wainwright sashays around a fog-bound forest in a red cape. The comparisons to Kate Bush in the iconic Wuthering Heights video are unmistakeable, and it proves to be a harbinger for the stylistic shifts and vocal gymnastics of Love Will Be Reborn. She winkingly refers to her “little songs of love and pain” in the opening track Middle of the Lake, her voice toggling between a gentle whisper and a joyful whoop. Wainwright has been open about the divorce from her producer Brad Albetta and a subsequent new love being the fulcrum around which the album spins, and you can hear those extremes: the languid ache of Report Card, where she sings about the absence of her children, compared with the upbeat Hole in My Heart, where she purrs, “I got naked right away when I saw you”. While the untethered nature of Wainwright’s voice can make some melodies hard to pin down, there is a new clarity at work in many of these narratives of loss and redemption, and, much like her parents (Loudon Wainwright III and Kate McGarrigle) and her brother Rufus, she mainlines her songs direct from nerve-endings that she is more than willing to expose to the public. BARRY DIVOLA

Some improvisers paint themselves into sonic corners, where they naively regurgitate their prior much-masticated exploits. Then there’s Jon Rose. Forty years on and Rose still surprises the hell out of me with his sheer audacity; still dumfounds me as if I’m encountering beauty in music for the first time; still bamboozles me as deadly seriousness and blithest whimsy cease to lie at segregated points on an artificial grid, but intermingle freely and erratically as they do in life. So art, ceasing to imitate life, becomes it. To call Rose an improvising violinist is like calling Leonardo a bit of a painter. He is a deviser of possibilities and a realiser of the most improbable ones. His volatile imagination results in exquisitely crafted instruments of no fixed parentage and in music that is a restless quest for the new. The first disc of this brain-detonating double album has him enjoying improvised duets with fellow adventurers Jim Denley, Freya Schack-Arnott, Clayton Thomas and Robbie Avenaim. The second disc reaches still further beyond the sonic horizon, making instruments of the Sydney Harbour Bridge and a humble Hills Hoist. Yes, really. This is my favourite Jon Rose album of all. Until the next. JOHN SHAND

Steve Gunn, OTHER YOU (Matador/Remote Control), ★★★½

For obvious reasons, Steve Gunn’s Australian tour of late 2019 seems like absolutely aeons ago now. That was a series of warm, intimate performances from a folk guitarist of utterly compelling ability and sensitivity – qualities that remain abundant on this, the New Yorker’s sixth album. Perhaps a slower burn than his previous LPs, Other You does not quite have the swirling, psychedelic compositional brilliance of Gunn masterpieces of old such as Water Wheel or Old Strange. That, however, is not to say there isn’t great songwriting craft and sophistication to be found on tracks such as Fulton or Circuit Rider. The main allure of this album, though, is arguably the sounds, tones and effects he conjures in the name of atmosphere and mood: the eerie synth lines of Good Wind; the busy textures on the ambient instrumental piece Sugar Kiss; the colourful range of different guitar effects throughout. It all amounts to another sumptuous addition to one of the most interesting catalogues in indie-folk circles. While not his most immediately gripping work, Other You is nevertheless adventurous yet mellow; vibrant yet delicate – confirming that Gunn’s is a supreme talent. BARNABY SMITH

At 27, Nigerian-British rapper Little Simz’s plentiful accolades include a nomination for the 2019 Mercury Prize, and her fourth studio album signals that, after years of being celebrated by the music industry, she is now ready to be embraced by the mainstream. This year has already seen her 2019 single Venom gain popularity on TikTok, and with more eyes on her than ever before, Simz has delivered another slick, political meditation in her signature style with Sometimes I Might Be Introvert. From the orchestral fanfare of opener Introvert to the mellifluous, soulful funk of Two Worlds Apart, Simz rides the beat effortlessly. Whether she’s spitting scathing bars on I Love You I Hate You (“Never thought a parent would give me my first heartbreak”), or revelling in her own and others’ strength on Woman, the rapper bellows every word from her chest. Her lyricism achieves the remarkable feat of being both capable of gentle introspection (Miss Understood) and biting social critique (as on Little Q Pt 2). Across the 19 tracks guest features from soul singer Cleo Sol, Obongjayar and The Crown actress Emma Corrin add a whimsical flair, although Simz remains the main event with her hypnotic, nimble flow. KISH LAL

THE WATCHLIST
Find out the next TV, streaming series and movies to add to your must-sees. Get The Watchlist delivered every Thursday.