A haunting video art installation acknowledging the murderous history of anti-communist purges in Bali has won this year’s Blake Prize.

Sydney artist Leyla Stevens’ Kidung/Lament was selected from a record-breaking 1200 entries – double those of the 2019 award – to win the $35,000 biennial prize that aims to encourage a conversation about spirituality and religion through art. 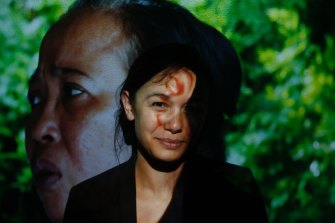 Stevens’ Kidung/Lament is a three-channel video work framed around a pohon beringin or banyan tree that marks an unacknowledged mass grave site from Indonesia’s 1965 anti-communist massacres. A chant that laments the missing and the dead forms the soundtrack.

As many as 80,000 people are thought to have been killed in Bali in 1965-66, the political violence initiated by so-called militia death squads drawn from local civilian populations.

Banyan trees are regarded as sacred in Bali; a symbol of eternal life and believed to house spirits.

Judges described Stevens’ work as masterful and powerful, a sensitive and intimate exploration of a localised story with global resonance. “We forget and underestimate the power inanimate objects hold when it comes to memory,” they said.

“It is through memory that we can access trauma, understanding and accountability. While the artist taps into a multitude of global conversations, perhaps most poignantly, the work invites us to think deeper about the tragic Aboriginal histories also embedded in the Australian landscape.”

Eddie Abd from Hazelbrook won the $6000 acquisitive Blake Emerging Artist Prize for In Their Finest, a video piece that combines long exposure Victorian death portraits with the traditional textiles of Syria to explore the tradition of conservation by families uprooted from ancestral lands.

Zanny Begg of Bulli was awarded the Blake Established Artist Residency and Exhibition for her video work Stories of Kannagi, examining the impact of colonisation and the Sri Lankan civil war on Tamil communities living on the international diaspora.

Finalists will be exhibited at the Casula Powerhouse until April 11.

In need of some good news?

Stories that will brighten your outlook, delivered weekly to your inbox. Sign up for our Greater Good newsletter here.