The actress said she thought of the encounter after sexual abuse allegations were leveled against Spacey.

Mena Suvari claims she had an interaction with Kevin Spacey on the set of “American Beauty” that she deemed “weird and unusual.”

The actress, who rose to fame after co-starring with Spacey in the 1999 Oscar-winning film, told People she “trusted” him while they worked together and didn’t think twice that he requested they rehearse together privately for an intimate scene.

Mena Suvari Details Years of Sexual Abuse: 'It Was a Process of Destruction'

After Spacey brought her to a “side room,” the pair would go on to “lay on the bed very close to one another,” according to the star. She added, “He was sort of gently holding me. It was very peaceful but weird and unusual.”

It wasn’t until Spacey’s numerous sexual misconduct, harassment and assault allegations came out in 2018 that Suvari reconsidered the exchange.

“My heart goes out to anyone who suffers abuse,” she told the outlet.

Meanwhile, Suvari detailed her own experience with sexual abuse in her new book “The Great Peace: A Memoir.” 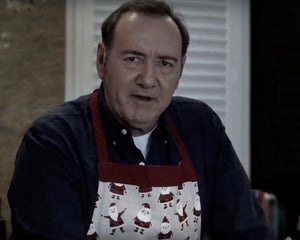 Kevin Spacey Creeps Out Internet on Christmas Eve with Weird Monologue Declaring, 'You Want Me Back'

“Between the ages of twelve and twenty, I was the victim of repeated sexual abuse,” Suvari, 42, wrote in her book.

As she explained in her book, per PEOPLE, it began when she was 12 and in the sixth grade. Suvari and her family had moved to Charleston, South Carolina, where she said she was “the new girl” in town and “was just trying to fit in.”

Then, a friend of one of her older brothers, whom she called “KJ” in her memoir, pursued her and pressured her into having sex, but she told him that she didn’t “want to do that.” However, just a month before her 13th birthday, Suvari claims KJ took her into a room in his family’s home and raped her.

“Part of me died that day,” Suvari recalled. “He used me, had fun with me and then disposed of me. He called me a whore. I never got to have a healthy expression of [sex]. My choice was lost. And that, compiled with already not feeling seen and heard, established a concept that I would have of myself. That that was my value.”

Suvari admitted that she felt ashamed and blamed herself for “allow[ing] it to happen,” with PEOPLE noting that a “pattern began to set in: Make it work; just survive.”