Home » Lifestyle » Merry Christmas, with a sting in the gifts

It was the time for the laying down of verbal swords and a spot of Christmas goodwill.

The end of the political year beckoned, and Australia’s senior politicians gathered with gifts to launch a charity wishing tree in the parliament house foyer on Wednesday. 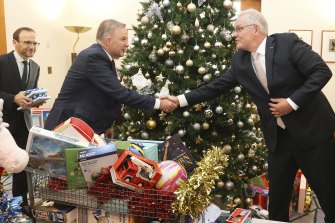 Ah, but even at such an innocent occasion it was possible to discern that, at least for Opposition Leader Anthony Albanese, it was also a jolly pre-election season for having an unspoken dig at Prime Minister Scott Morrison.

Morrison announced he was looking forward to hanging Christmas lights on the house this weekend, and “the ritual with the girls and with Jen”.

He brought along, among other gifts, a GraviTrax, a system that enables children to design gravity-powered race tracks for speeding marbles.

Just such a toy “got me through quite a few lockdowns this year, I’ve got to tell you,” said the Prime Minister. 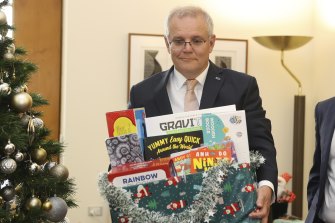 Prime Minister Scott Morrison and his box of toys.Credit:Alex Ellinghausen

Albanese appeared to have been harbouring mischievous thoughts when choosing his range of gifts, and the message they might deliver.

There was a large puzzle featuring Paris’s Eiffel Tower. Could he have been thinking of a recent event featuring a French President?

There was a red fire truck. A hose, anyone?

A toy submarine. And a “build your own solar windmill” set-up. 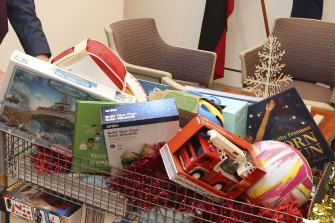 Nevertheless, Morrison and Albanese shook hands and wished each other a happy Christmas.

The KMart Wishing Tree Appeal, in association with the Salvation Army, is Australia’s largest Christmas gift collection appeal for families in need.

The theme for this year’s appeal – “small gift, big heart” – underscores what the Salvos say is an unprecedented need for support that has built during the pandemic, and encourages Australians to give what they can, however big or small.

Brian Laundrie 'motive' could be exposed by body cam footage if he stands trial, lawyer says