Behind the scenes down-under! Mike Tindall shares snaps as he and Zara lap up glitzy Magic Millions tournament in Australia

Mike Tindall has revealed behind-the-scenes snaps as he and Zara attended the glitzy Magic Millions festival in Australia.

Princess Anne’s daughter, 41, and her husband, 44, were spotted mingling with Aussie A-listers – including Chris Hemsworth and wife Elsa Pataky, at the Queensland society event this weekend.

The former rugby ace and I’m A Celebrity star went on to share a number of snaps of the couple at the event on his Instagram page last night.

In one clip, the royals could be seen standing in the gorgeous Australian sunshine as they inspected some of the horses taking part in this weekend’s race meeting. 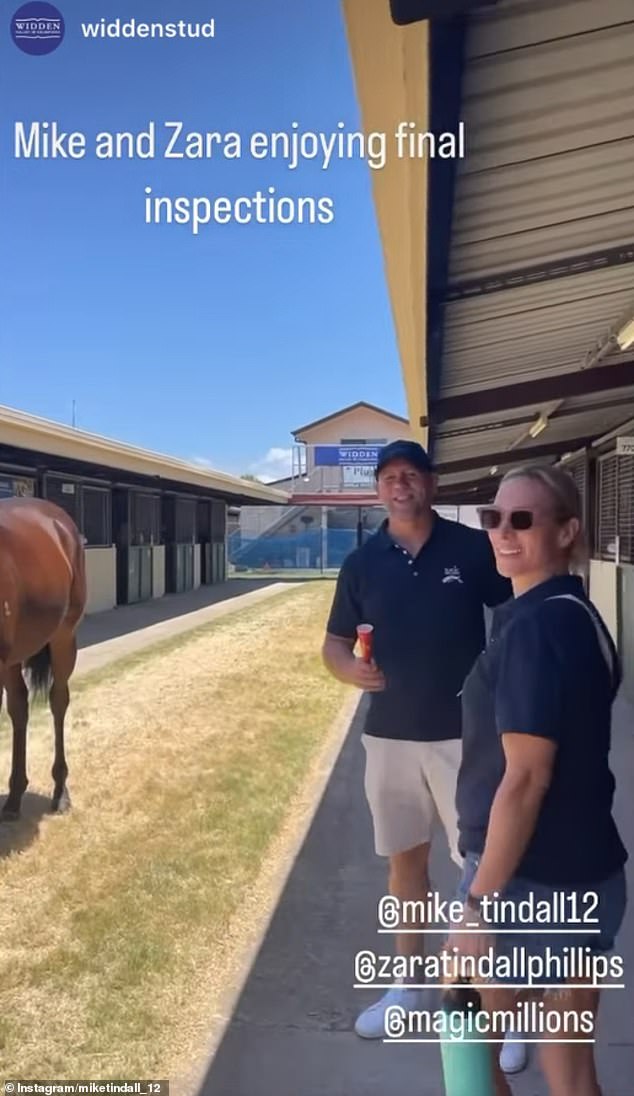 Zara was announced as the first Magic Millions Racing Women Ambassador in 2012, and now travels to Surfers Paradise in Queensland every year for the Gold Coast Yearling Sale, seven days of auctions which culminate in this weekend’s major race meeting where all contenders are horses bought at previous Magic Millions auctions.

The week also involves showjumping and polo events which Zara took part in.

‘This is an ongoing partnership that sees Zara attend events every year to present gifts to the winners,’ Mischa Jolin, Managing Director of Influencer, PR and Branding agency, Edencancan previously told Femail.

‘She is an integral part of the brand which empowers women within the equestrian field. I would anticipate this partnership is worth circa £125k per year.’

Earlier this week, the couple were seen chatting to The Avengers actor Chris, 39, and wife Elsa, 46, ahead of Zara getting in the saddle to take part in a chukka or two – while a debonair-looking Mike in cheered her on. 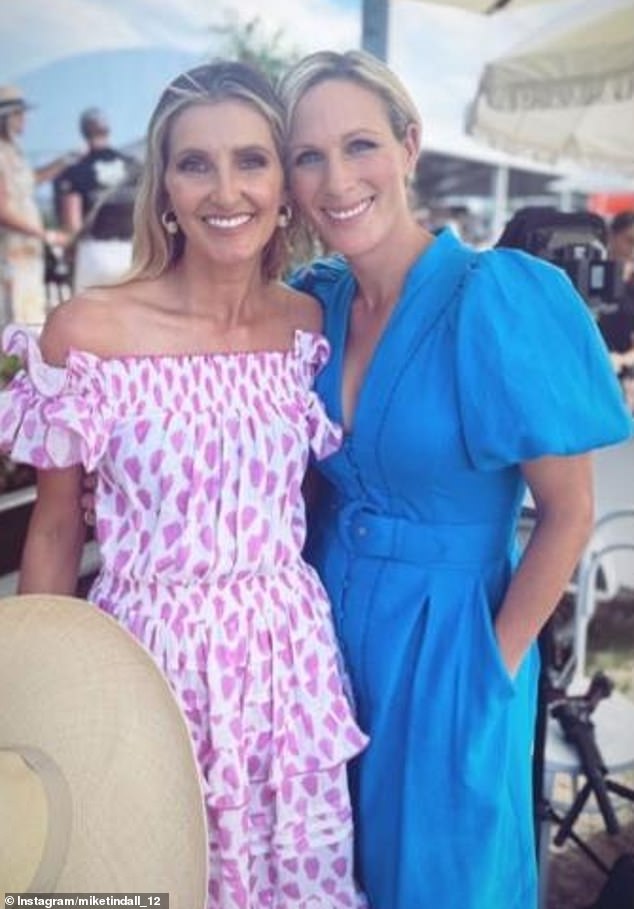 In another snap Mike shared on Instagram, his wife posed with a friend in a chic blue day dress with puffed sleeves, cinched at the waist with a belt of the same fabric

Zara looked very elegant in a chic blue day dress with puffed sleeves, cinched at the waist with a belt of the same fabric.

Sunglasses perched on her nose, she sported a natural day makeup, her blonde locks styled in a ruffled blow-dry.

She later changed into her riding gear to take part in a game of polo. Mike looked relaxed and tan in a pair of white trousers he accessorised with a lilac linen jacket.

Zara spent a good amount of time bonding with Elsa, with the women sharing an embrace and a chat as they stood in the shade watching the show. 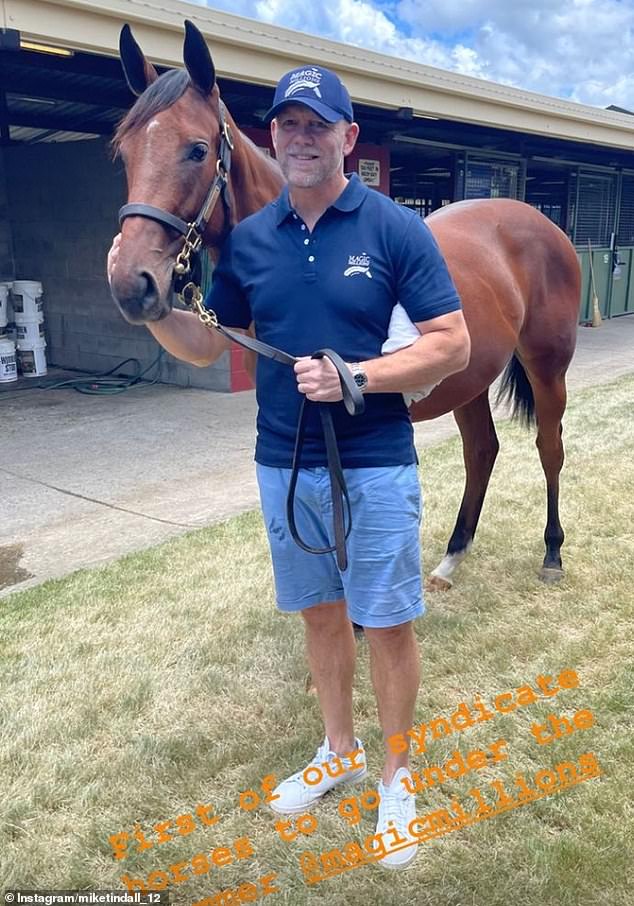 The couple, who have been ambassadors for the race since 2012, now travel to Surfers Paradise in Queensland every year for the Gold Coast Yearling Sale (pictured, another snap of Mike posing at the event)

Earlier during the day, the couple were seen enjoying a lively chat with Chris Hemsworth and Elsa Pataky.

lsa also opted for bright blue on the day, wearing a boho dress with a cutout at the waist showing off some skin and accented by gold buckles.

The Spanish actress added a wide straw hat with scarves attached, as well as large sunglasses and a number of fine gold accessories.

The 46-year-old chose a bronzed makeup palette with soft pink cheeks and a sheer lip gloss. 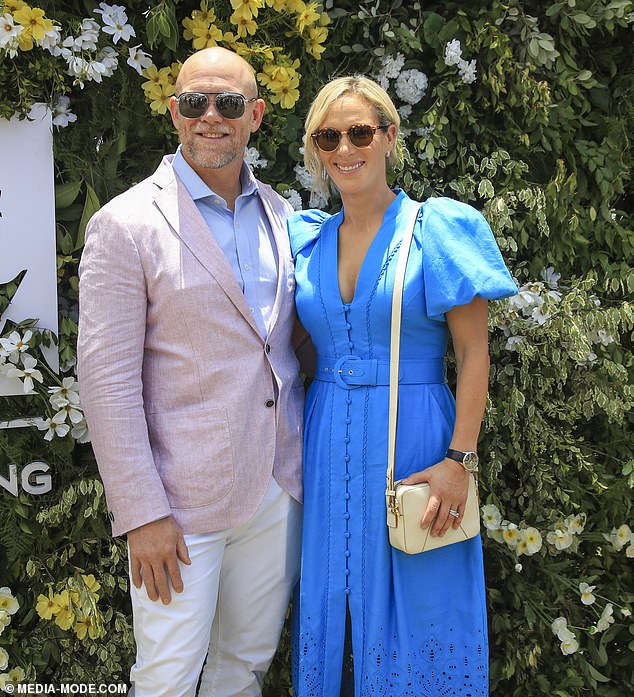 In the pink: Zara looked elegant in a blue day dress, while Mike looked dapper in a linen lilac jacket he wore with white trousers 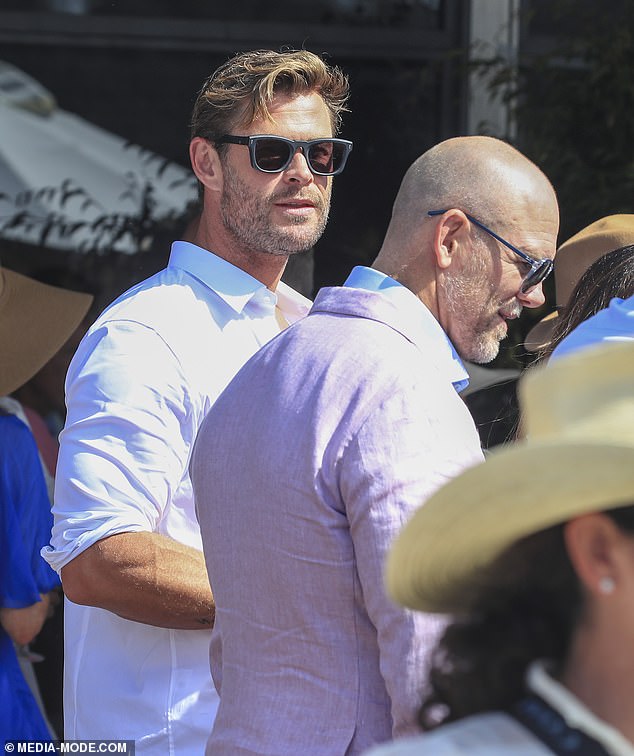 Mike was pictured alongside Elsa’s husband Chris Hemsworth, who was wearing a crisp white shirt 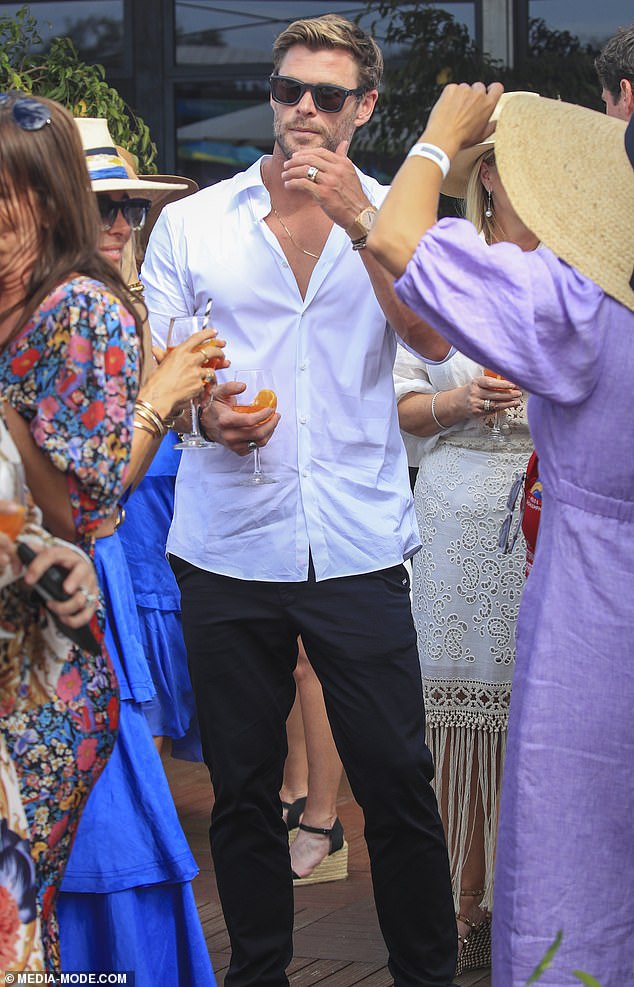 It marks the second trip to Australia in recent months for the couple, who travelled across the world when Mike competed in I’m a Celebrity in December.

During that trip, the couple enjoyed the supercars races at the Adelaide 500 together.

It is part of the 2022 Supercars Championship Season, and held at Adelaide Parklands Circuit.

They looked very engaged in the action as they spent time in the Walkinshaw Andretti United pits, both sporting racing headsets.

Mike was also spotted blending in with the locals at a café in Adelaide, South Australia. 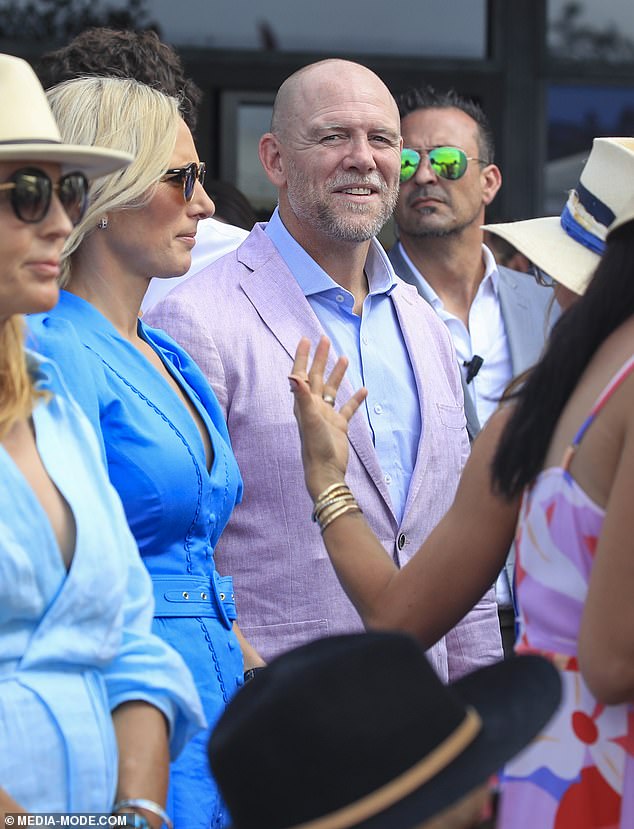 Mike looked chic in a lilac linen blaser he wore with a baby blue shirt, which matched his wife’s day dress

Zara made a solo trip out during their December visit to Australia, enjoying some retail therapy.

The British equestrian indulged in a VIP shopping experience at an exclusive boutique in Adelaide, South Australia, leaving with armfuls of sartorial acquisitions.

She booked in a session at the Sally Phillips designer clothing boutique, which is accessible by appointment only.

However they returned to the UK for Christmas, joining members of the royal family for Kate’s carol concert at Westminster Abbey.

They where they were spotted at a race at Cheltenham Racecourse on New Year’s Day.

They appeared to have jetted back into Australia shortly after that outing.

The couple have often spoken about their fondness for Australia as the country is dear to their heart.

They met at Sydney bar in 2003 while Mike was ‘drowning his sorrows’ after being cut from the England World Cup squad and Zara was on a gap year.

The pair have been married since 2011 and have three children – Mia Grace Tindall, Lucas Tindall and Lena Elizabeth Tindall.

The upper-crust pugilist and the hard-partying pal: James Meade and Thomas Van Straubenzee were the ‘REAL best men’ at Prince William and Kate Middleton’s wedding, says Prince Harry (who wore THAT Nazi outfit to one of their birthday bashes)