Renewable energy developer Neoen says it will press ahead with its Queensland wind farm despite the federal government controversially vetoing public funding for the project and overturning an independent agency’s advice to support it.

The board of the $5 billion Northern Australia Infrastructure Fund (NAIF), which was set up to support infrastructure investment, had recommended a loan of up to $280 million for Neoen’s $380 million Kaban wind farm, located west of Cairns in the Atherton Tablelands. 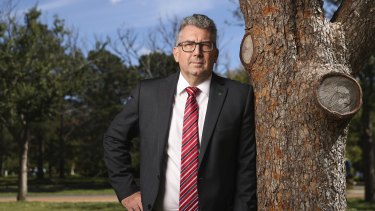 Northern Australia and Resources Minister Keith Pitt says he will table in Parliament his reasons for vetoing a recommendation to lend up to $280 million to a wind farm. Credit:Alex Ellinghausen

It was revealed on Thursday the federal Northern Australia Minister Keith Pitt used powers under the laws governing the NAIF to veto the funding.

Mr Pitt wrote to NAIF chief executive Chris Wade on March 29 and told him to reject Neoen’s loan. He said the wind farm would not provide firm power to the energy grid and he was not convinced it would contribute to lower energy prices.

He said on Thursday his reasons for vetoing NAIF’s loan pick would be tabled in Parliament, as required by legislation.

Mr Pitt said North Queenslanders should be assured “every decision I make is in their best interests” and the federal government had a strong track record of supporting renewable energy projects.

Neoen Australia managing director Louis de Sambucy said he was disappointed the minister had canned the NAIF loan, but the company was “hopeful of announcing a positive pathway forward in upcoming days”.

The Kaban wind farm is designed to generate enough energy to power 96,000 homes and would create 250 jobs during construction.

But wind power cannot supply the energy grid on its own. Its weather-dependent power supply requires dispatchable power from gas, pumped hydro or batteries to back up its intermittent supply.

“Neoen remains committed to Kaban and the opportunities it presents for energy affordability, reliability and emissions reductions in Queensland,” Mr de Sambucy said.

“The project combines a 157-megawatt wind farm contracted with CleanCo at a competitive electricity price, with a network improvement in Far North Queensland. Our focus remains on delivering Kaban.”

Labor’s climate change and Energy spokesman Chris Bowen said the federal government is a “fraud” in its claims to support North Queensland jobs.

“There is only one possible explanation for this decision, stone-cold prejudice. The Morrison government does not support or like renewable energy,” Mr Bowen said.

“The world’s climate emergency is Australia’s jobs opportunity, but … the Morrison government is determined not to take the opportunity.”

France-based Neoen is one of the world’s biggest developers of renewable energy projects. The company operates the Tesla Big Battery in South Australia, which was the largest lithium-ion battery in the world when US tech billionaire Elon Musk built it in 2017. Neoen is now pursuing plans to develop a big battery in Victoria, which would be nearly three times the initial size of South Australia’s.

Coal-fired power in Queensland can be a controversial issue. The chief executive of Stanwell Coal, which generates about 40 per cent of the state’s coal-fired power unexpectedly resigned last month after he told an industry conference the company may need to shut down or mothball some of its sites.

Wholesale energy prices have dropped to zero or even negative prices in recent months due to the onslaught of cheap daytime supply from renewables, which is undercutting coal plant business models.

Shawn Mendes and Camila Cabello: A Timeline of Whatever is Going On