Former foreign minister Julie Bishop has warned the rising tensions between the world’s two great powers, the United States and China, have the potential to place more people in slavery because of the disruption to the free flow of trade and workers.

Ms Bishop also suggested Australia could be forced to choose between its largest trading partner, China, and its primary security partner, the US. 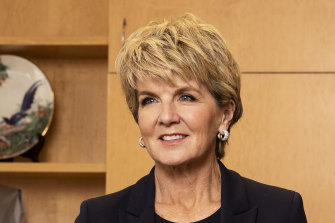 She said it was now up to the Australian people to use their purchasing power to stand up against the scourge of modern slavery.

The Australian National University chancellor, who made combating modern slavery a key priority in her time as foreign minister, said individual consumers in developed countries had a “greater responsibility” to stand up and tackle the issue.

Delivering the annual Anthony Low Commonwealth Lecture at ANU on Thursday evening, Ms Bishop said in the past, Australia and other nations had maintained a stance that they did not need to choose between China and the US.

“However, such choices are increasingly being imposed on nations and that risks creating divides in technology, infrastructure and more,” she said. “Again, this has the potential to place more people at risk should there be a decoupling of the world’s two largest economies and disruptions to the free flow of trade and capital.”

Diplomatic relations between Canberra and Beijing are at their lowest levels in decades, with China imposing more than $20 billion of tariffs on Australia after it called for a global inquiry into COVID-19 outbreak. Australia has also infuriated China with decisions such as banning Huawei from its 5G rollout and implementing world-leading foreign interference legislation.

Ms Bishop said rising geopolitical tensions could result in the decoupling of the global tech supply chain, with US and other Western countries going one way and China another in areas such as 5G, which could provide more opportunities for modern slavery to prosper.

According to Ms Bishop, over the last quarter of a century, Australia had taken a leadership role in combating human trafficking, particularly its efforts to “dismantle the people smuggling trade into Australia that began to flourish in the late 1990s, with a dramatic increase in the number of unauthorised boat arrivals, mostly from the Middle East and via Indonesia”.

She said a significant response was the establishment in 2002 of the Bali Process, a key regional forum co-chaired by Australia and Indonesia that was upgraded when Ms Bishop was foreign minister to respond to emergencies.

Ms Bishop said she was proud of the Modern Slavery Act 2018, which created a reporting requirement on businesses to ensure they implemented internal controls to detect and prevent modern slavery.

“The complexity of these issues and matters relating to supply chains place a greater responsibility on individual consumers in developed countries in particular,” she said.

“We must demand supply-chain transparency and accountability, and use our purchasing power to influence company decisions.

“Governments can mandate reporting, however, the power lies with the consumer.”

Ms Bishop also said Australia had played a leading role in exposing “orphanage volun-tourism”, which is the practice of establishing sham orphanages in developing countries and then attracting the support of volunteers in developed countries including Australia.