A mother has told how her then 14-month-old son found her breast cancer – by refusing to to take milk from her right breast.

Joanne Carr, 37, from Liverpool, had breastfed her son Dougie since the day he was born without any problems, but 14 months on, she said he started to refuse milk from her right nipple.

It prompted her to check her chest, where she found a pea-sized lump, and medics diagnosed her with breast cancer in her breast milk duct.

She said she would never have found it if Dougie, now five, hadn’t rejected her breast – a sign that something was blocking the duct or mis-shaping her breast. 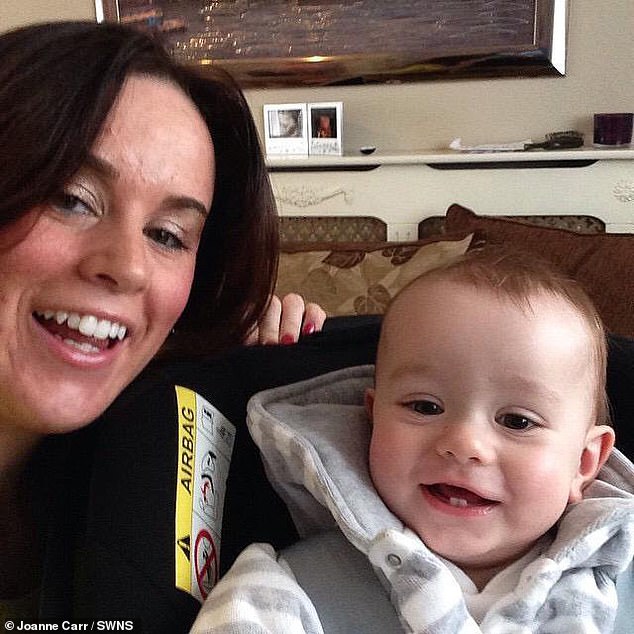 Joanne Carr (pictured) 37, from Liverpool, had breastfed her son Dougie (pictured as a baby since the day he was born without any problems, but 14 months on, she said he started to refuse milk from her right nipple

Now cancer-free, Joanne, said she may not be here today without the help her ‘guardian angel’ Dougie.

‘I owe my life to him. It was a complete miracle. If I didn’t have Dougie then I might never have found the lump,’ said the single mother-of-two.

‘He gets away with murder now, I spoil him rotten. I’d be lost without him.

‘He saved my life, without a doubt. He’s a little angel. The doctor said it’s very strange what Dougie did.’ 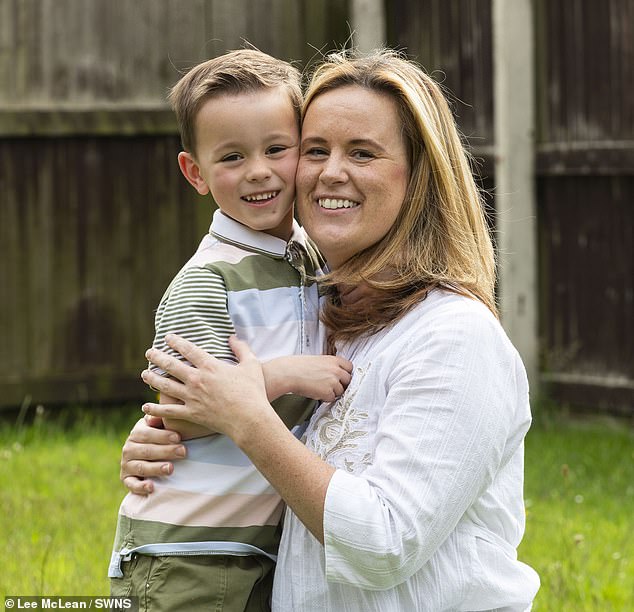 Joanne at home in Liverpool with her ‘guardian angel’ now. Dougie is now five-years-old

‘He must have known somehow. He was looking out for me. I know I wouldn’t have checked if it wasn’t for him. It’s remarkable when you think about it.’

Joanne, a nurse, gave birth to Dougie in April 2014 at Liverpool Women’s Hospital.

Now aged five, he was the final piece in the puzzle for Joanne’s ‘perfect little family’ and lives at home with his mother and his big sister, Isla McInerney, 11.

Everything was normal up until June 2015, when aged 14 months, Dougie’s feeding habits changed at random. 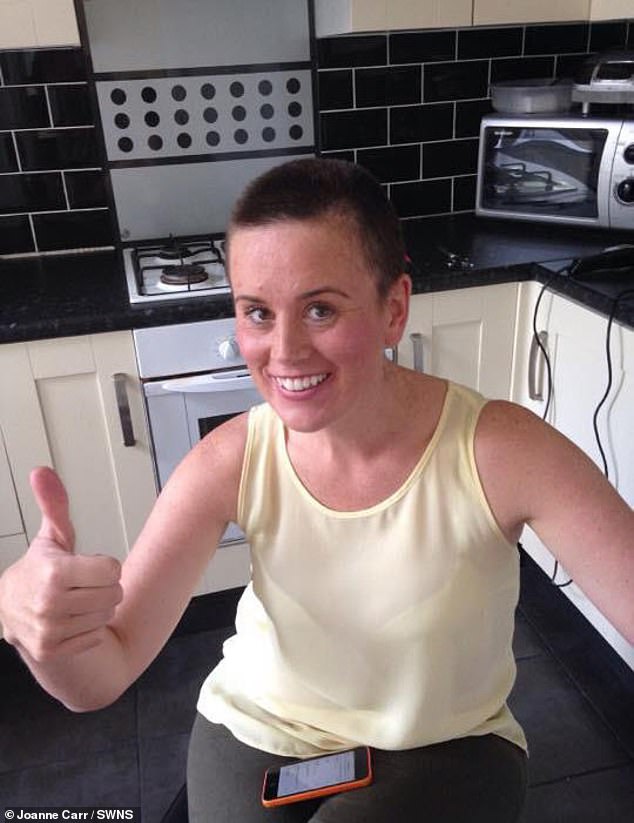 Joanne is pictured in August 2015, the first time she shaved her hair off after being diagnosed

He stopped feeding from his mother’s right breast, and Joanne said she had no idea why.

‘He just wasn’t interested anymore and he refused to feed on my right breast’, said Joanne.

‘He fed on the other one fine. I thought I might have a blocked duct or something. It was very strange.’

Concerned, Joanne decided to check her breast for lumps, or for signs of any other problems. 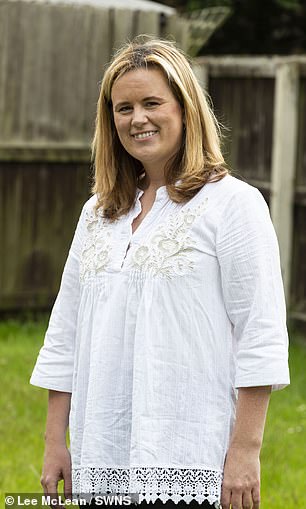 Joanne was given the all-clear in April last year, and has been in remission for around a year

She found a pea-sized lump on the right boob and booked an appointment to visit her GP.

She was prescribed a course of antibiotics and told to come back if it didn’t go away.

She went back to her GP, who referred her to specialists at Royal Liverpool Hospital.

She said: ‘I was really worried by this point. My gut feeling was that something wasn’t right. I started to think the lump isn’t normal.

‘I went to the hospital the first day I was back in the UK. I was nervous.’

Joanne had scans and a cell biopsy, and four days later she was told she had an aggressive form of breast cancer – invasive ductal cancer.

It’s a common type of breast cancer which spreads to the milk ducts – the ‘pipes’ which carry milk from the milk-producing lobules to the nipple.

Medics didn’t speculate on why it stopped Dougie feeding. But Joanne said the 2cm lump was really close to her nipple, so Dougie felt it pressing against his mouth when he was feeding, causing him discomfort and interfering his lip position.

‘I was diagnosed there and then,’ she said. ‘I was at the hospital on my own. They took me into a room and told me I had cancer. 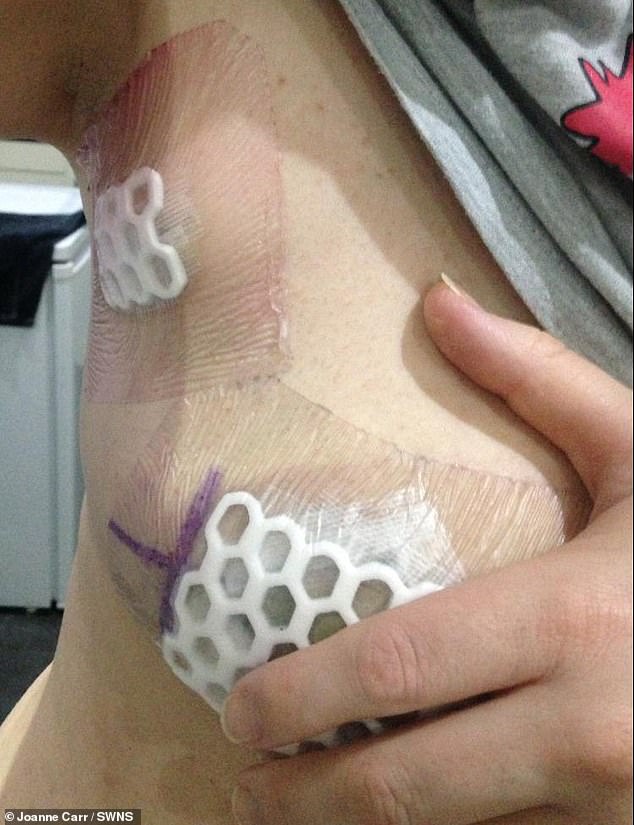 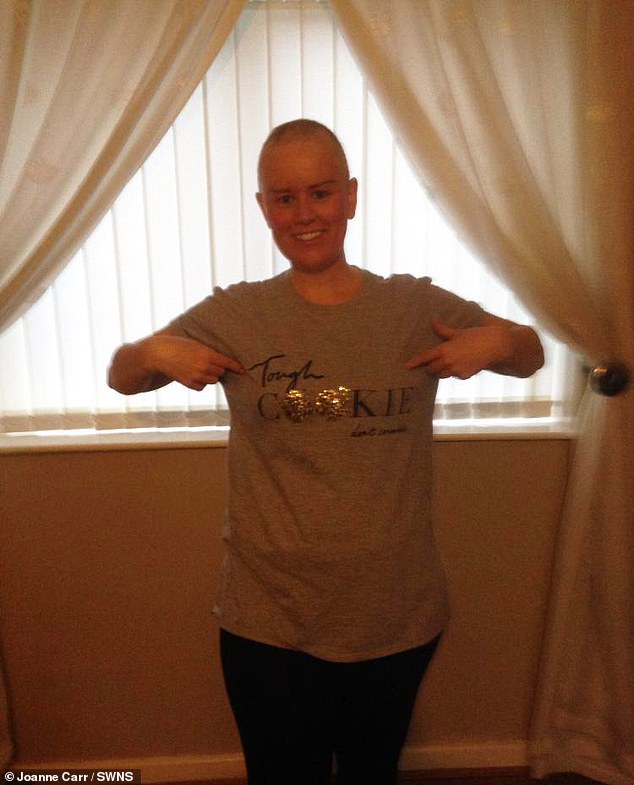 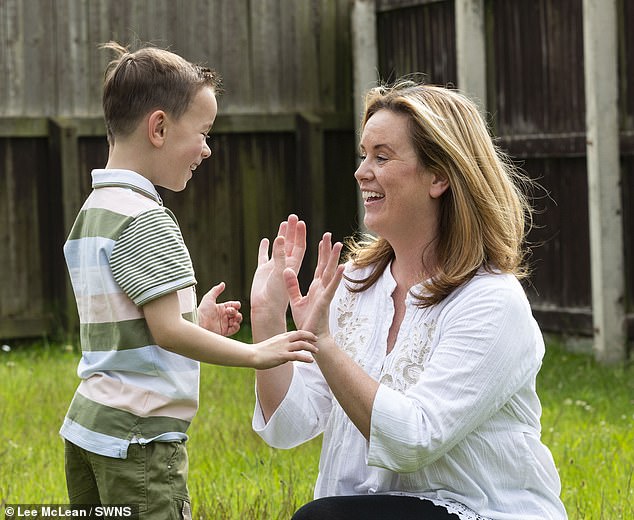 Joanne (right) had eight rounds of chemotherapy until March last year, and lost all of her hair. However Joanne was given the all-clear in April last year, and has been in remission for around a year. She said she owes her life to Dougie (left)

‘They said it was aggressive but treatable. I was absolutely gutted.

‘I sat there and cried when I told my family. I started to think about what would happen to my children. I didn’t want them to be alone.

‘I was worried they’ve have to grow up without a mum. I just wanted to be on my own and completely went into my shell. I coped by sleeping and locked myself away.

‘But I knew I had to try to stay strong for my children.’ Joanne had eight rounds of chemotherapy until March last year, and lost all of her hair. 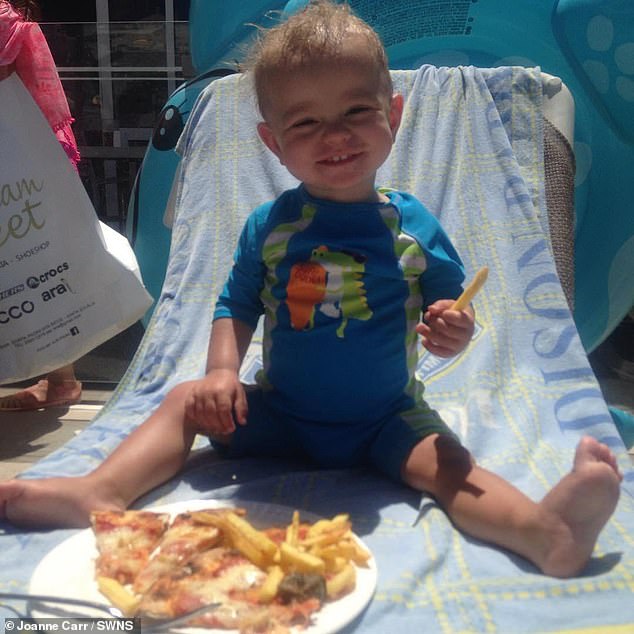 But the lump shrank and surgeons removed residual cancer cells in March 2018.

Joanne was given the all-clear in April last year, and has been in remission for around a year.

She said when she was told she was cancer-free for the first time she ‘burst into tears’.

‘I was just as emotional as when I found out,’ said Joanne, who is retraining to specialise in chemotherapy. 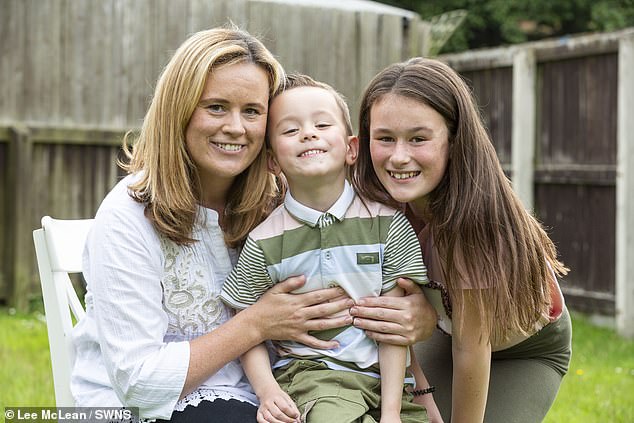 ‘Chemo was awful. That’s what made me so sick, it wasn’t the cancer that made me ill.

‘I was so looking forward to being a mum again and spending proper time with my children.

‘I still think about how lucky I am to this day. My attitude now is to just live life to the full. I owe my life to Dougie and he means the world to me.’

Joanne hasn’t been able to return to work yet as she still suffers with joint pains resulting from her chemo, but is hoping to start university next year for further studies in nursing.

‘Bridgerton’: The 4 Fashion Pieces That Have Become Popular Thanks to the Show

Super-fit dad, 30, diagnosed with terminal cancer one week before his wedding