British mothers reveal the basic essentials they ‘can’t afford to buy any more’ amid the cost of living crisis – including kitchen roll, shower gel and even TAMPONS

British mothers have revealed the basic essentials they ‘can’t afford to buy any more’ amid the cost of living crisis – including tampons and kitchen roll.

The discussion was sparked after one unnamed woman took to Mumsnet to ask people what small things they have had to sacrifice because they simply can not afford them any more.

Responses ranged from essentials such as tampons to, food items such as meat and milk.

Mail on Sunday previously revealed grocery prices are going up a record ten per cent compared with last year – and some items have even doubled in price.

The anonymous British mother started off the conversation by explaining she felt forced to cut out shower gels from her weekly shop, adding: ‘What small, mundane things have you stopped buying because you just can’t afford them any more? ‘I was just reading thread and thinking about shower gel and bath soaks. I used to buy a couple of shower gels a week, £2ish ones and now I just buy bars of soap and will occasionally buy Aldi’s own.

She continued: ‘I also used to buy the rigid toothpaste tubes that have the push down button so the dear child had a one push portion. I just get the normal squeeze tubes now.’

The mother added: ‘I don’t buy bubble bath at all. I just little things but I miss having a nice bubbly soak and using a nice shampoo. 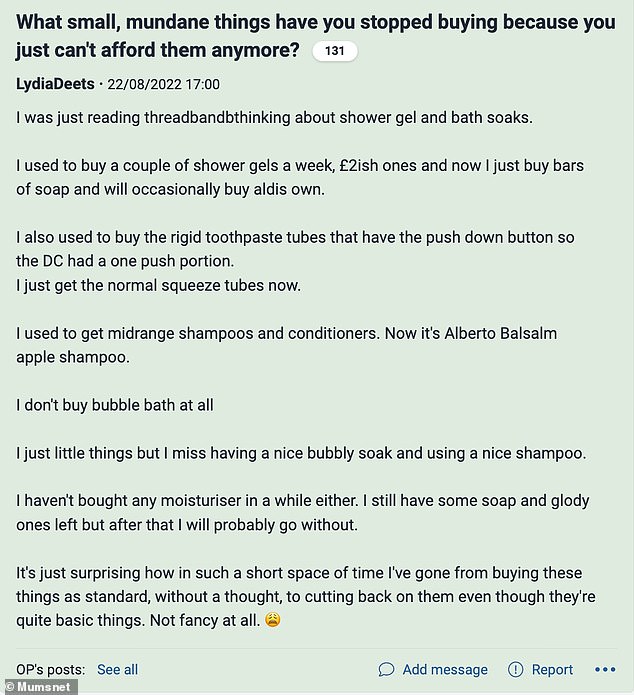 ‘I haven’t bought any moisturiser in a while either. I still have some soap and glody ones left but after that I will probably go without.’

She concluded: ‘It’s just surprising how in such a short space of time I’ve gone from buying these things as standard, without a thought, to cutting back on them even though they’re quite basic things. Not fancy at all.’

Many rushed to the comments to reveal the items they have had to leave behind in the weekly shop, which included pricey food items and basic toiletries.

One person said: ‘Tampons. What a time to be alive.’ while another woman wrote: ‘Stopped buying mouthwash. It’s extortionate, although I’ve only really been pricing it in Boots and Tesco.’

Meat seemed to be the main item that most people decided to cut costs on by adopting a more vegetarian lifestyle.

One person wrote: ‘I used to eat meat pretty much everyday and now I try and eat plant based two or three days a week.’ 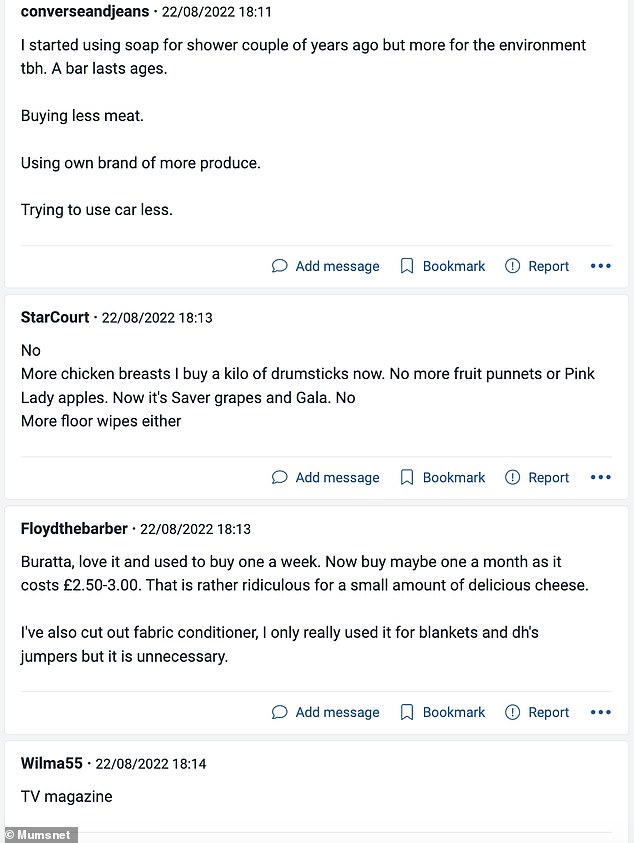 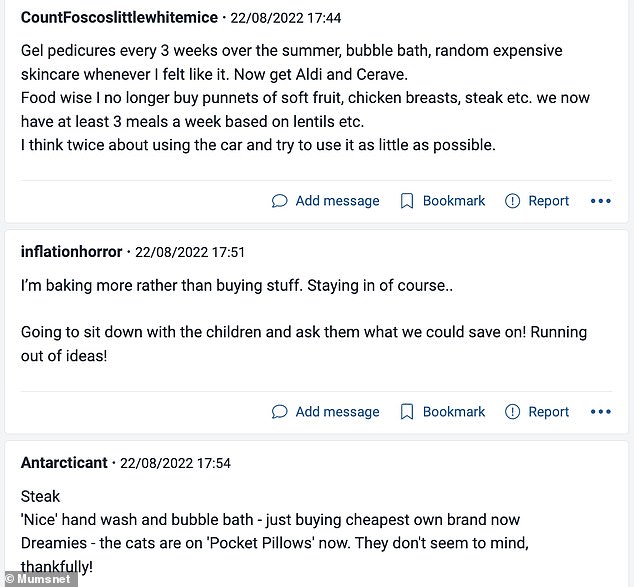 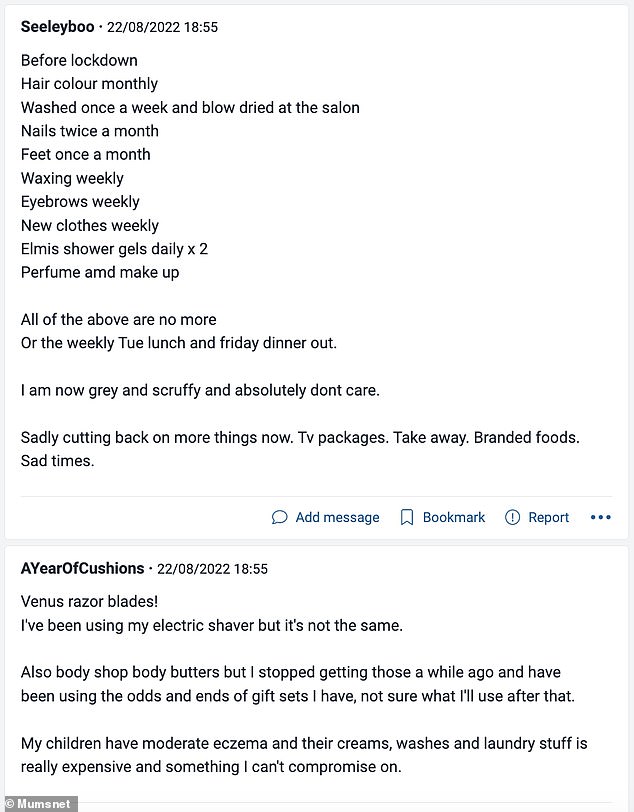 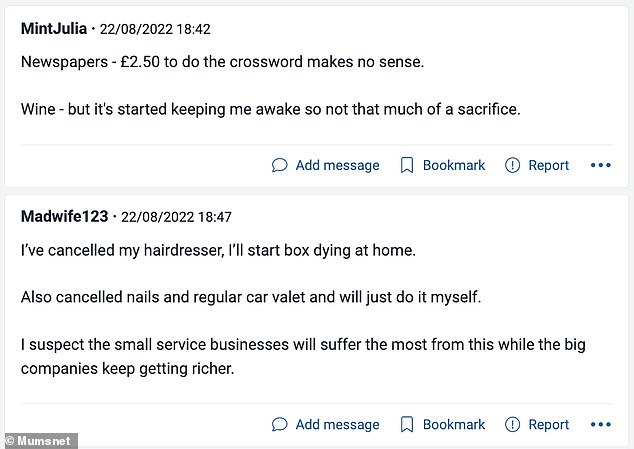 Many other users were quick to respond to the thread, revealing tey had given up meat and trips to the beauty salon

Another said: ‘No more steak or chicken breast. Instead cheaper cuts like chicken thighs / legs and also padding out meals with lentils/beans.

While someone else said: ‘Food wise I no longer buy punnets of soft fruit, chicken breasts, steak etc. we now have at least 3 meals a week based on lentils etc. I think twice about using the car and try to use it as little as possible.’

A fourth wrote: ‘No more chicken breasts I buy a kilo of drumsticks now. No more fruit punnets or Pink Lady apples. Now it’s Saver grapes and Gala. No more floor wipes either.’

Others decided they will have to cut back on beauty products and hair salon appointments.

One mother said: ‘I’ve cancelled my hairdresser, I’ll start box dying at home. Also cancelled nails and regular car valet and will just do it myself.

‘I suspect the small service businesses will suffer the most from this while the big companies keep getting richer.’

While another wrote: ‘Nothing yet but just cancelled my hair highlights due in September. I think the first to go will be the food goodies that are generally unhealthy for you anyway and not at all necessary.’

Revealed: The shopping trolley essentials that have DOUBLED in one year as cost-of-living crisis continues to hit British families

Grocery prices are going up a record ten per cent compared with last year – but some items have doubled in price, The Mail on Sunday revealed last month.

Heinz came under scrutiny earlier this year for increasing favourites such as beans and soup by as much as 40 per cent, but these were thought to be extreme examples.

This latest research for the MoS by Assosia, which monitors prices at the Big Four supermarkets, shows more than 120 of the most popular branded and own-label products are up by at least that amount compared with a year ago.

Petits Filous yogurt drinks and supermarket own-brand cooking salt are both up 100 per cent, and Crisp ’N Dry rapeseed oil is up 80 per cent.

200g can of Heinz baked beans and sausages is up 73 per cent from 70p to £1.21. The increase of 51p is more than what shoppers paid for the product a couple of years ago.

Price rises on own-label staples are traditionally limited by supermarkets, as they battle to outdo rivals on value. But of the biggest increases in percentage terms, almost half were own-label.

Experts point out this is partly because they cost much less in the first place, so the same rise in pence equates to a bigger percentage rise.

Own-label pasta features prominently among items that have risen by more than 40 per cent – various types and sizes making up 16 of the 121 items. Typically, 500g packs, such as spaghetti and penne, are up 30p – from about 53p to 83p, or 57 per cent. Brands such as Napolina are also up by a similar amount of pence.

Helen Morrissey, analyst at asset management company Hargreaves Lansdown, said: ‘Grocery prices have grown but even this hides the even murkier truth that the cost of some essential items has grown at a much higher rate than others.

‘Cooking oil, pasta, milk and margarine have risen by shocking amounts and – while you might not notice a few pence or a pound here and there – over the cost of a weekly shop it is really mounting up.

‘We are seeing more people looking to economise by going to cheaper supermarkets and switching to own-brands. While they may be cheaper, the costs of these are rising too.

‘Those on low incomes will be particularly struggling right now.’

Pandemic Of The Unvaccinated: Florida Tallies 20% Of Soaring New COVID-19 Cases In U.S.