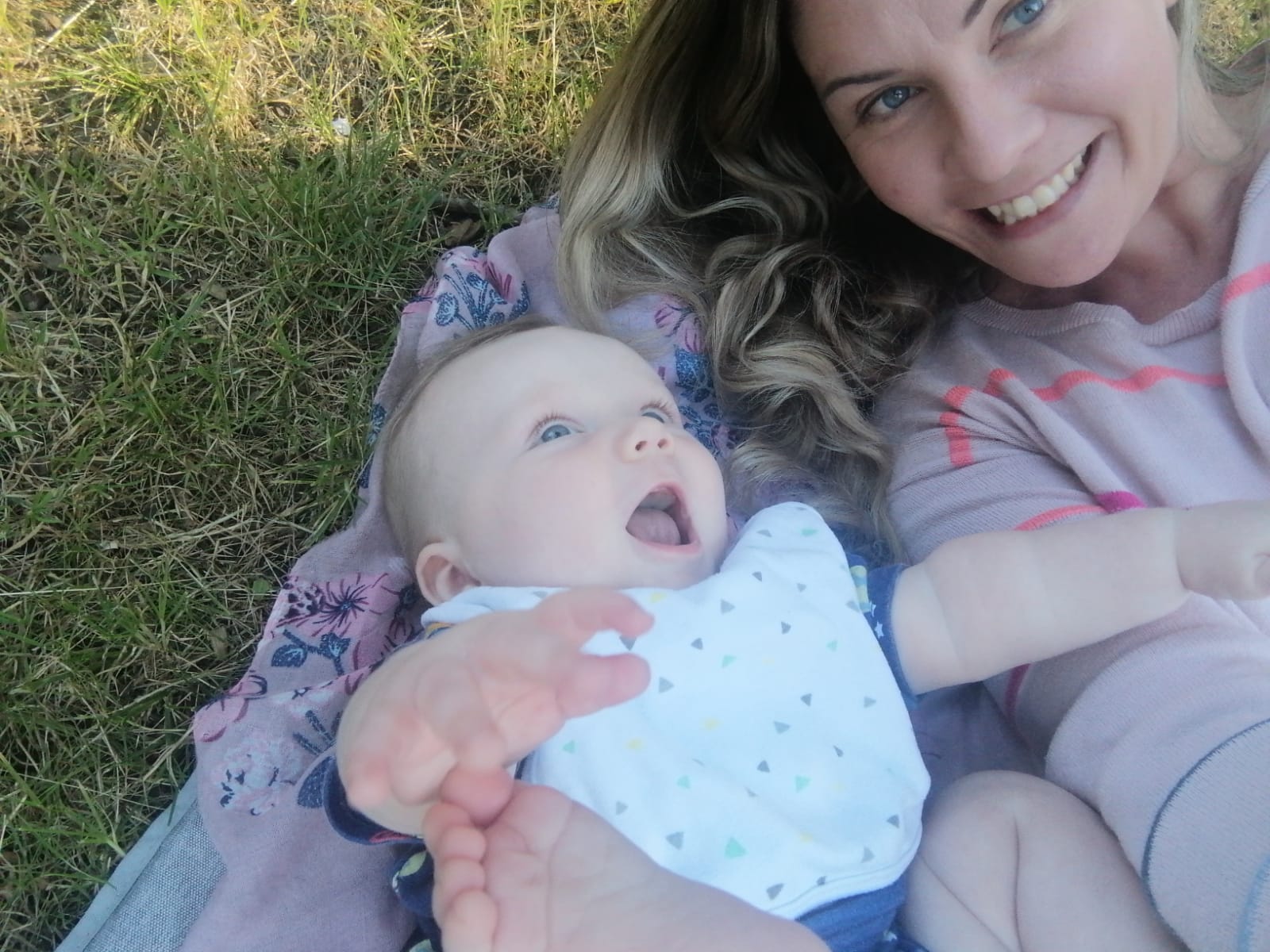 My fiancée Rachel’s pregnancy had been smooth. On 16 March of this year, she was a couple of days overdue and, at around 6am, her waters broke.

I have three children from a previous relationship but this was Rachel’s first – our first child together – we were so excited to meet him.

The team at Northampton General Hospital told us to wait for the contractions to get stronger and closer together, but by 10am Rachel could barely get her breath.

Although she remained calm, Rachel was nervous and with only a 15 minute drive to the hospital, I rushed her in. The staff however didn’t know whether to keep us or to send us home.

I’m a biochemistry researcher at the hospital and knowing various statistics makes you all the more aware of what can go wrong. I was adamant that she needed to be seen.

The heart rate checks were fine. Baby’s head was down, slightly engaged. But, as time went on, Rachel really struggled to get past five centimetres dilated. She had an epidural, which failed.

Night-time came and went. Soon, the day was breaking and Rachel was exhausted.

I must say that the midwives were great at making us feel at ease but it was gruelling.

Then, around 2pm the following day, things took a sharp turn for the worse.

Rachel’s temperature spiked to 40 degrees and suddenly, the energy in the room changed.

Rachel couldn’t control her arms or legs and started flailing them around. At first, I thought the pain had become too much.

Next thing, Rachel started screaming, ‘I’m dying, I’m going to die!’ She made me call my nan, who she’s very close to; ‘I’m so sorry, I’m not going to see you again,’ she wailed. I also called her parents, and my dad.

‘Could this be sepsis?’ I wondered instinctively. I’ve studied sepsis and, as part of my job, sadly, I’ve seen people in ICU be taken by it.

I was fixated on trying to calm Rachel but as I turned around, a doctor appeared.

Instantly, I took him aside and said, ‘This has all the hallmarks of sepsis.’ He agreed and confirmed that they were about to treat her for it.

Sepsis is a serious complication that can arise from a bacterial infection anywhere in someone’s body.

If it’s particularly nasty, it can cause the body’s immune system to go into overdrive. Inflammation, a usually helpful part of the immune response, can become excessive and damage tissues or interfere with blood flow.

Essentially, the immune system goes into ‘attack’ mode and, failing to recognise healthy cells from those of the infection, it targets itself. This can lead to a drop in blood pressure, so oxygen does not reach the organs and tissues where it is required.

It can prove fatal without rapid antibiotic treatment.

The doctors were concerned our baby boy would also have it and they had to act fast to deliver him or he might die in the womb.

Horrified, I hastily filled in forms – Rachel was still conscious and signed them too, but she wasn’t really with it, so I helped her.

They administered antibiotics quickly but I was terrified. Rachel was still adamant she was going to die.

‘I’m here and they’re doing all they can,’ I reassured her.

Deep down, I was scared for her and our baby. Every minute counts with sepsis. I barely had time to think as doctors said they were going to do an emergency C-Section and I got into scrubs.

Then our baby’s heart rate dropped and they ushered me out while they gave Rachel general anaesthetic.

I was taken to a separate ward – a small ICU specifically for the maternity unit.

Beside myself with worry, I rang Rachel’s mum and my parents. There were a couple of ‘Everything’s gonna be OK’ reassuring comments but everybody was crying.

Part of my PhD focused on sepsis – I knew what the chances of their survival were and the percentages are low.

About an hour and 15 mins passed, I was totally alone and convinced that they were both dead.

‘I’ve lost him before I’ve even met him,’ I thought, bitterly, and I couldn’t face thinking of life without Rachel.

Rachel and I had been together for four years and we were excited for our future as a family as we had been trying a little while.

Then a doctor appeared and led me into a family room. At that point I felt destroyed.

He began by apologising. I instantly thought he was saying he was sorry they had died. Two midwives were present and thought the same, they came rushing over and hugged me.

Then he told me the C-Section had been difficult but, perhaps seeing the devastation on my face, quickly added, ‘I want to reassure you that they have both come through.’

I was filled with relief but he went on to inform me, ‘Your baby boy was born limp, blue and with no heartbeat.’

He’d had to be resuscitated three times – it took 12 minutes but then his heart kicked in strong.

Weighing a healthy 7lb 6oz, he was doing well but wasn’t out of the woods yet.

I remember two big doors opening and I had to blink against the bright lights.

My little man was in a tiny cot. A nurse handed him to me and my heart swelled with love. His eyes were wide open. Totally oblivious to the drama, he seemed fine.

‘He’s made a remarkable recovery,’ commented one nurse.

Within a couple of minutes, Rachel was wheeled through, still unconscious.

Coming round moments later, she burst into tears when she saw me. Then her distress turned to joy as she noticed I was cradling our boy, Kobe.

Unable to hold him after the C-Section, I brought him close so she could kiss his forehead.

They are connected in such a strong way – they survived so much together – I’m in awe of them both.

Doctors couldn’t be sure but they think the infection came because Rachel’s waters broke and she went such a long time trying to deliver Kobe.

After a week in hospital on a course of antibiotics, they were both discharged. Getting them home was a dream. It could easily have been a tragic end to our story.

Sometimes I look at Kobe and think ‘I cannot believe how close we were to losing you.’

Rachel and I get tearful often. The trauma takes time to process so we keep talking with each other about it.

Kobe on the other hand is such a happy baby. Always smiling. At six months old (actually on my birthday 2nd Oct he got his first tooth and said Dada for the first time).

Rachel doesn’t remember a lot from the labour – particularly the convulsions or the screaming – which is probably a good thing.

She’s quite a ‘mother earth’ character so she was a bit heartbroken when she discovered she’d had a C-Section.

We look back on that and chuckle. A little bit of humour in times of crisis keeps you going! It’s just how I cope. If they had not pulled through, though, my life would be in pieces and I know how lucky I am – sepsis is definitely no laughing matter.

Keen not to see anyone else go through what we did, we’re aiming to raise awareness of sepsis.

Kobe has made a remarkable recovery and doing so well. Rachel is also doing fantastic although she suffers a little from post sepsis syndrome, particularly fatigue.

Rachel is a qualified counsellor and with the support of Northampton University and Northampton hospital, she now runs a support group for sepsis survivors.

Sepsis is quite deceiving – every symptom could be associated with something else. And not everybody gets all the symptoms so it makes it really tricky to diagnose.

It affects a lot more people in the UK than you might imagine. Every year in the UK 50,000 people die of sepsis and, worldwide, one in five deaths are caused by it – that’s more people than most cancers kills.

I urge you to trust your instincts. I really didn’t want to be that guy that tells the doctor their job but no one should bite their tongue if they suspect sepsis. It’s always better to ask than regret what was left unsaid.

Sarah and Jade fall out over party plans during Covid