Home » Lifestyle » New bride donates kidney to husband's ex-wife: 'Did it from her heart'

Ten years after their first date, Debby Neal-Strickland put on a cream-colored lace gown and married her longtime sweetheart at their Florida church. Two days later, she put on a hospital gown and donated a kidney to Mylaen Merthe — her new husband’s ex-wife.

An unusual story? Yes. But the tale of Jim Strickland and his two wives is a testament to how love and compassion can triumph over division.

Mylaen, 59, had long struggled with kidney disease. By last year, she was ghostly pale with dark circles under her eyes, dragging herself through the workday with no energy. By the time she was admitted to the hospital in November, her kidneys were only functioning at 8%.

Her brother offered to donate a kidney, but wasn’t a match so Debby volunteered. 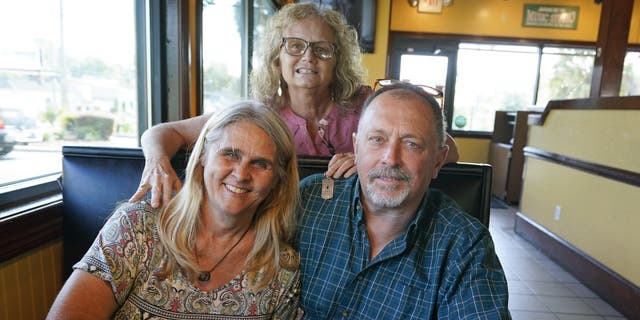 Jim and Mylaen have been divorced nearly two decades, but they got along well as they raised their two children, and as Jim fell in love with 56-year-old Debby. The women were friendly at family gatherings, though not especially close.

And Debby knew that Mylaen was about to become a grandmother for the first time — her daughter was pregnant.

She imagined Mylaen’s daughter giving birth, “and her mom not being there. I just couldn’t not try to change that,” she said. “God told me, ‘You’re a match and you need to do this.'”

Giving is what Debby and Jim do. At their home in Ocala, they are raising six children — a 6-year-old girl with autism and five teenagers. Some are Debby’s biological grandchildren and some they are fostering.

But Debby’s desire to help Mylaen ran deeper. She spent years watching her brother die of cystic fibrosis while awaiting a double lung transplant. She offered one of her lungs, but she wasn’t a match and he needed two.

“When somebody needs an organ, if they don’t get it, they’re probably not going to make it. I know it’s something that you do quickly,” she said. 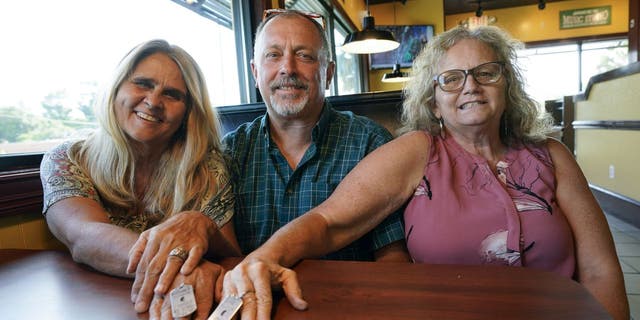 Debby-Neal, Jim Strickland and Mylaen Merthe reunited at a restaurant in Ocala, Fla., on Tuesday, May 25, 2021. (AP Photo/John Raoux)

Debby passed the initial match for blood and tissue and began more complex testing while juggling a house full of kids — and at one point, toting a urine collection jug for 24 hours.

Mylaen tried desperately not to get her hopes up, focusing instead on her future as a grandmother.

Debby “knew that’s all I ever wanted,” she said. She “did it from her heart.”

After months of testing and COVID delays, the transplant was set for two days after Jim and Debby’s wedding. Debby was tempted to postpone the wedding, but friends discouraged her. The couple had already waited 10 years, canceling twice in deference to their children who announced their own engagements.

They married Nov. 22. Jim wore a gray suit with a yellow shirt, “because he’s my single yellow rose,” Debby said.

As soon as she regained consciousness, the new bride asked about Mylaen. A few floors below, Mylaen was also pleading with the nurses — “`I need to see her.’ That was the first thing out of my mouth.” 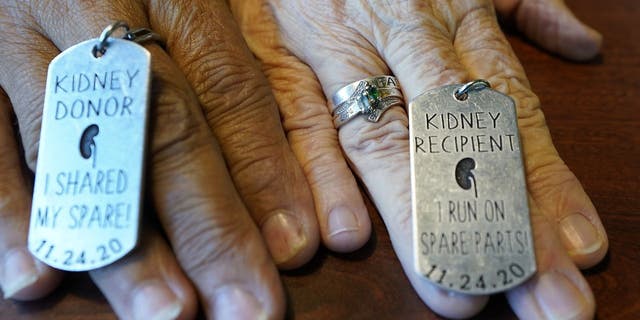 Debby-Neal Strickland and Mylaen Merthe show off the donor/recipient tags they had made following the kidney donation. (AP Photo/John Raoux)

COVID-19 protocols were strict, but Jim was eventually allowed to wheel his new wife into his ex-wife’s room.

“We had our masks on too, so we’re crying, and of course our stomachs were hurting because of the incisions,” Mylaen said. “We kinda laughed and cried.”

Debby could already see the difference. The circles under Mylaen’s eyes were gone, “she looked so alive and revitalized.”

Mylaen moved in with her daughter, son-in-law and new baby Jackson to recuperate.

“I got to hold him and feed him,” said Mylaen, who welcomed a second grandson in March. “I was like, ‘I’m actually here to see this and I’m holding this little baby.’”

The women call themselves kidney sisters, pray for each other, coo over their grandbabies and are planning a big family trip to Lake Rabun, Georgia, this summer.

“This is what the world is about. Family. We need to stick together,” Mylaen said. “She saved my life.”

“One Good Thing” is a series that highlights individuals whose actions provide glimmers of joy in hard times — stories of people who find a way to make a difference, no matter how small. Read the collection of stories at https://apnews.com/hub/one-good-thing

A-Rod Wore J.Lo’s Dress For A TikTok Challenge & It Needs To Be Seen To Be Believed