In a brief statement provided by his management team, Cave wrote: “With much sadness, I can confirm that my son, Jethro, has passed away. We would be grateful for family privacy at this time.” 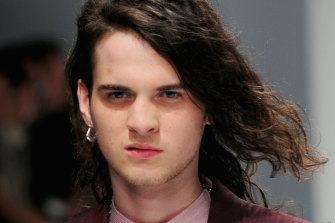 The cause of the 30-year-old’s death is currently unknown.Credit:Getty

The cause of Lazenby’s death is not known. It comes seven years after the death of another of Cave’s four children, Arthur, who fell from a cliff in 2015.

Lazenby had been recently released from jail after he was found guilty of physically attacking his mother in March.

Earlier this year, a court heard Lazenby kneed his mother Beau Lazenby in the face during an argument in her Collingwood home, which caused bleeding and bruising.

He was released on bail on Thursday, on the condition he had no contact with his mother for the next two years.

His lawyer told the court he had been diagnosed with schizophrenia.

“Darling Jethro,” she captioned a photo of her stepson on Instagram.

The death of Lazenby comes after Cave’s 15-year-old son Arthur – Lazenby’s half-brother – died after falling from a cliff near Brighton on England’s south coast in 2015.

An inquest into the death of Arthur Cave found the teenager had taken LSD before falling to his death.