Dogs on death row: Animal shelter warns that strays and older dogs who struggle to find new owners will end up being put down as homes struggle to cope with influx of lockdown puppies

Dog owners who have abandoned the puppies they bought during lockdown for company have been slammed for their ‘shameful’ behaviour.

The Covid-19 pandemic saw a huge surge in people impulse buying dogs to keep them company at home, but with lockdown restrictions easing, hundreds of puppies are being resold or handed in to rescue centres.

Several owners have found that they haven’t been able to cope financially with a pet or that their animals have developed behavioural issues, such as separation anxiety, because they haven’t been socialised properly during the pandemic.

Niall Lester, co-founder of New Hope Animal Rescue in Kent, appeared on This Morning today, where he said that his centre has been overwhelmed by lockdown puppies and predicted that the problem will only worsen over the next year.

He said that older dogs, who were abandoned before the pandemic, and animals with behavioural issues are at the most at risk of being euthanised – with younger dogs likely to be adopted before them. 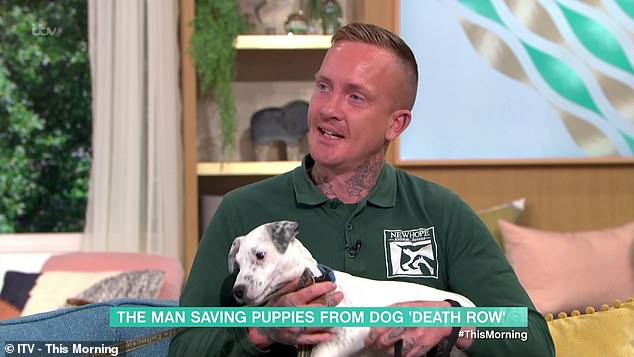 Niall Lester, co-founder of New Hope Animal Rescue in Kent, appeared on This Morning today, where he said that his centre has been overwhelmed by lockdown puppies

‘I do think we’re at the very start of it,’ said Niall. ‘I think we have a good year of this getting worse; I think this is the very beginning of the issue to be honest’.

The segment struck a chord with viewers, with one writing: ‘Breaks my heart seeing all these beautiful dogs put in shelters and being put to sleep because idiots can’t commit to caring for them long term.’

Another angry viewer wrote: ‘I’m sorry but who would want to put a healthy puppy down?!??’

A third said: ‘If you’ve bought a dog over lockdown and now giving it up as we return to “norma”, shame on you and please don’t ever get a dog again. For the dog’s sake.’ 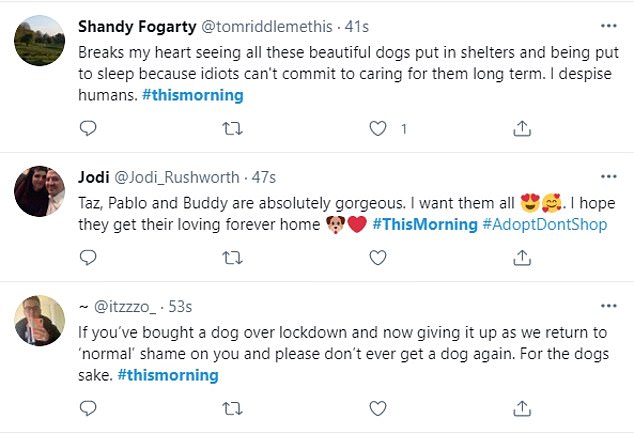 The segment struck a chord with viewers, who slammed dog owners who have abandoned the puppies they bought during lockdown

Niall explained: ‘Puppy sales have increased massively, puppy sales have spiked because people have been at home and felt they can manage a dog and as life returns to normal, since they’ve been back at work, problems are arising.

‘Separation anxiety is a big one and it’s quite a difficult problem for people to manage, so we are seeing separation pups coming and stranger reaction, fear of other people, fear of other dogs, not the correct socialisation.

Niall appeared with three dogs; Buddy, who was handed into his centre at nine- weeks-old for barking and nipping, Pablo because his owners couldn’t financially support him, and Taz, who has been placed in multiple homes because he needs an operation on his hip. 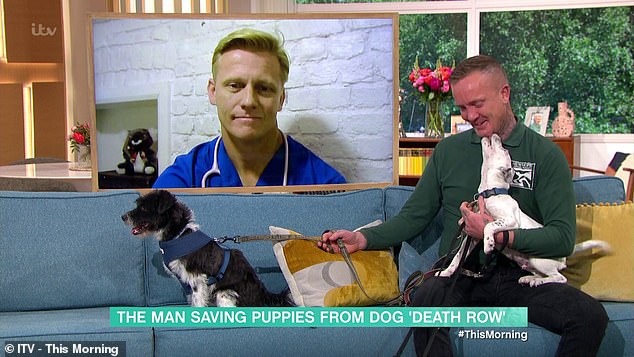 Niall appeared with Buddy (right), who was handed into his centre at nine weeks old for barking and nipping and Pablo (left) because his owners couldn’t financially support him 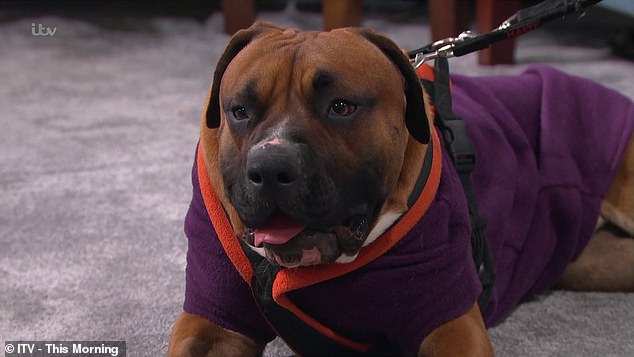 He went on: ‘We’re always full, we always have been, even before lockdown. But what’s poignant for us is we’re having to turn away a lot more. The options run out of places to go, and then euthanasia is always a possibility.

‘I think it won’t necessarily be the lockdown pups that are put to sleep, but certainly the dogs that were already in the system, the older strays, because the homes will probably take the younger ones or the pups with behavioural problems.’

In January it was reported that hundreds of ‘lockdown puppies’ are being resold or handed in to rescue centres, because short-sighted owners are struggling to cope only months after buying them.

Hundreds of puppies purchased during the pandemic are being resold or handed in to rescue centres.

Sellers in early January flooded pet websites with adverts for dogs aged between six and 12 months.

Many owners admitted they either do not have the time or the money to look after them.

The price of puppies surged to more than £3,000 for some breeds last year as many people started working from home or were furloughed.

Dozens of adverts have now appeared on sites such as Pets4you and Preloved as owners hope to recoup their costs.

More than 1,800 people have called the Dogs Trust over the past three months wanting to hand over dogs aged under one-year-old.

The charity received 114 calls on December 27 and 28 alone, including for 19 puppies under nine months old.

The RSPCA said it was ‘really concerned’ that so many dogs were being resold and was ‘bracing itself’ for more animals to be abandoned.

Sellers have flooded pet websites with adverts for dogs aged between six and 12 months, with many admitting they either do not have the time or the money to look after them.

Furthermore, research from pet wellness experts Itch revealed that nearly three quarters of Brits surveyed who brought a ‘lockdown puppy’ worry their pet will have separation related issues once life returns to normal.

The study also found that 40 per cent of new dog owners have experienced regrets about their purchase, with one in five not realising the work involved in raising and caring for a puppy.

Niall said in an interview with the Sunday Telegraph earlier this month: ‘I get multiple calls a week from vets saying “This young dog’s been brought in to be put to sleep because it’s got separation anxiety or is possessive over toys and food and has nipped”, because it’s not been given the right guidance’.

Many rescue centres are already at capacity thanks to ‘buyer’s remorse’, while also facing unprecedented budget cuts and financial strain themselves.

In March, Sylvia Van Atta, co-founder of Many Tears, near Llanelli, Carmarthenshire, said the surge in abandoned dogs being taken to their centre because of lockdown has been a ‘nightmare’.

Appearing on ITV she explained that the centre is struggling to survive because of the overwhelming number of animals who have been given up by their owners who bought them on a whim during the pandemic.

She said several animals had been arriving at the centre with behavioural problems because owners weren’t training them properly, while many others returned them after realising they couldn’t afford the pet.

Sylvia said puppies as young as 18-weeks-old had come to the centre after already being sold three times on social media – with designer dogs such as Cockapoos being one of the most common breeds to be abandoned.

‘It’s hit really hard and been a real struggle to keep going,’ she said. ‘We’re trying to do our very best to make it work and the staff have been wonderful, but it’s just a nightmare to be honest.’

She said animals are being so poorly trained when they first arrive with a new owner that they become ‘unsellable’ and have to be taken to a rescue centre.

‘They’ve been sold on various social media sites until they’re not sellable, because they’re not trained and they have a problem and people don’t dare sell them when they have a big problem, so they give them to us.’