See why Willow wants Biden to win the election.

On Election Day Tuesday, the 41-year-old singer, who has been open about her endorsement for the former VP, shared a sweet video of herself having a talk with her and Carey Hart’s daughter about the ongoing 2020 presidential election. 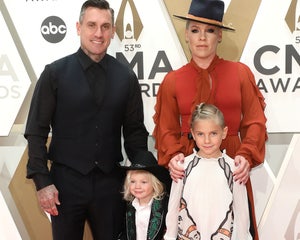 “Who do you want to win the election?” Pink asked her daughter in the clip.

Pink said that regardless of the results, she hopes “we can all figure out a way to be nicer to each other.” The “What About Us” singer then asked Willow, “Do you think that’s fair? Do you think that people should learn to disagree and still be kind?”

After Willow nodded in agreement, Pink asked her daughter what her biggest wish was.

While the 9-year-old first said her “biggest wish is to go to Hogwarts,” Pink prodded further, asking what Willow hopes for people in particular.

“Peace,” Willow said, to which Pink replied, “Love you.”

“We love you guys too!” the pop star added, looking at the camera. “All of you, everyone! What a thought.”

In the past few months, Pink and Hart have shared several posts on social media regarding their support of Biden.

More than once, Hart has hit back at critics claiming that Biden will take away their firearms as the motocross legend previously has mentioned he’s a “firm believer” in educating his children about how to shoot and handle guns safely.

After Hart, who also shares 3-year-old son Jameson with Pink, shared a post that featured photos of his kids shooting guns on Twitter, one of his followers replied by criticizing the former motocross racer’s support for Biden.

“It’s badass you are teaching your kids. Which is why I’m so confused you would support the democrats who have stated they will take our guns Unless only the rich will be allowed the privilage [sic],” the critic wrote. “Let that sink in as to why people will vote Trump.”

In response, Hart defended his endorsement of the former Vice President, saying he had “no choice.”

“1st they don’t want to take your guns, and why has none of the 44 before been able to take them??” he responded. “Second I’m a republican who hates Trump, so I have no choice.”