A  pregnant fitness trainer who shared a video of herself weight lifting 315lbs while showing off her seven-month baby bump has been branded ‘crazy’ by horrified critics who insist she is causing harm to her unborn child.

Yanyah Milutinović, 34, lives in New York with her police officer husband, Risel Martinez, 31, and their three-year-old daughter Smiljana, and she is due to give birth to the couple’s baby son in just one month.

During both of her pregnancies, Yanyah has continued to work out, focusing on her passion for weightlifting – something which she is very vocal about on Instagram.

However, her passion has come at a price. 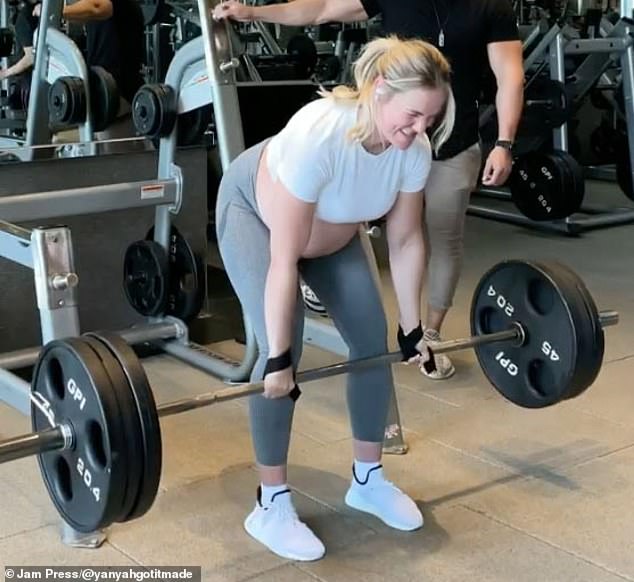 Under fire: A fitness trainer has prompted bitter backlash on social media after sharing video of herself dead-lifting 315lbs while seven-months pregnant 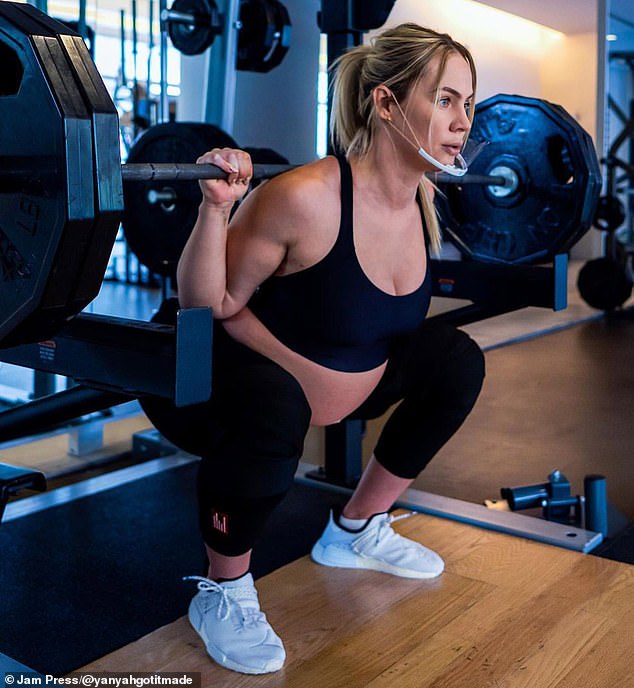 Consistent: Yanyah Milutinović, 34, from New York, has been very active during pregnancy, and has continued to lift weights – all the while documenting her workouts on Instagram 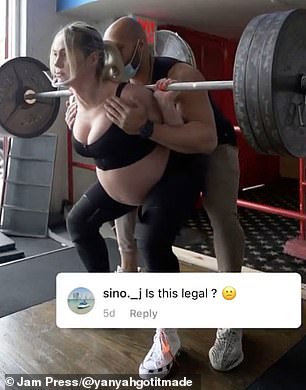 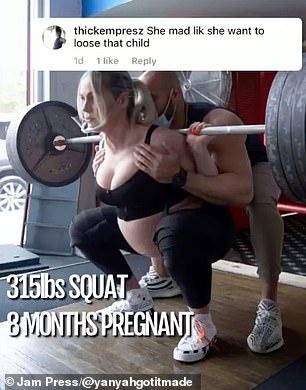 Criticism: Instagram videos in which she is seen lifting heavy weights while pregnant have been attacked by trolls, who have accused her of acting like she wants to ‘lose her baby’

Sharing a video of herself in the gym on May 15, the fitness influencer can be seen squatting an impressive 315 lbs, with her pregnant belly proudly on display.

She also deadlifts heavy weights and does other exercises.

The video has screenshots on top, which feature the negative comments she has received online as trolls lash out at the mom – calling her a ‘crazy woman’.

Others have accused her of placing her unborn baby at harm and working out just ‘for show’ or ‘for attention’.

One person even asked ‘is this legal?’ while others left even more abusive comments, which have since been removed.

The fitness coach claims to receive anything from three to 10 negative comments every single day.

‘Imagine if I would have allowed the noise of others opinions drown my inner voice?’ she wrote on the Instagram post of herself lifting weights.

‘Or that I didn’t have the courage to follow my own heart, knowledge and intuition?

‘Imagine if I would have lived my life the way that they would want me to, and that I allowed comments like these to break me down?

‘Or dictate my decisions to live a healthy life for myself and my unborn child?

‘Several hundreds of comments just like this. Daily, weekly, yearly.

‘For seven years now, and through two fit pregnancies.’

Yanyah told Jam Press that she will block people who write ‘disturbing and negative comments’ but they always return.

She claims one follower has even made more than 30 fake accounts over six years just to keep trolling her.

However, since sharing her latest video, women have reached out to share their support. 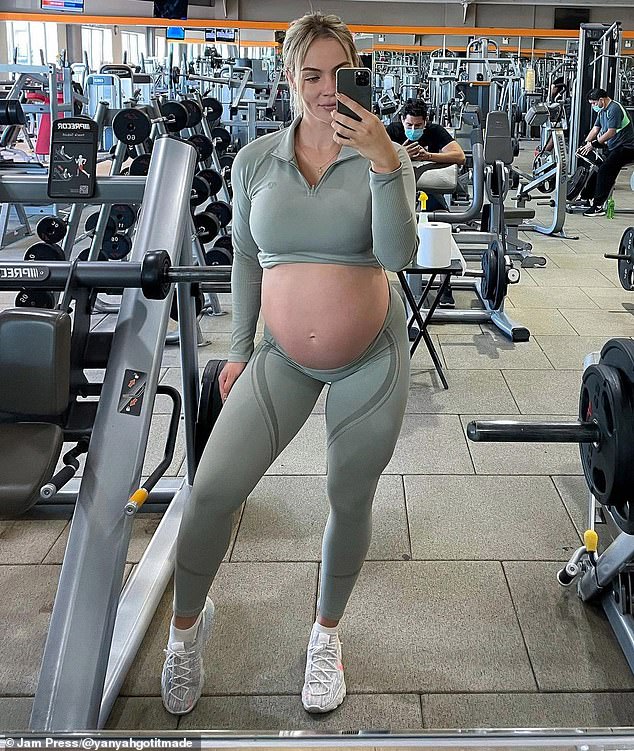 Hitting back: She regularly blocks trolls on Instagram, but says that many of them will simply create new accounts so they can continue to attack her

Personal: Yanyah, who has documented her changing body throughout her pregnancy, says that she works out with her baby bump because it ‘makes her feel good’

Transformation: After giving birth to her daughter Smiljana, now three, in 2018, Yanyah focused hard on regaining her prepartum physique 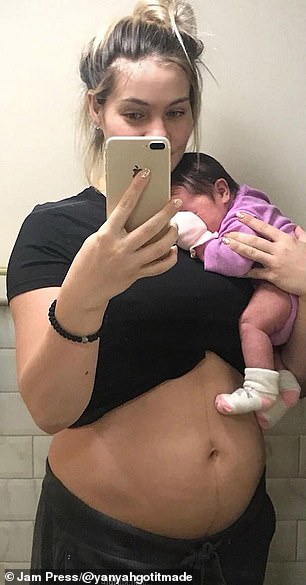 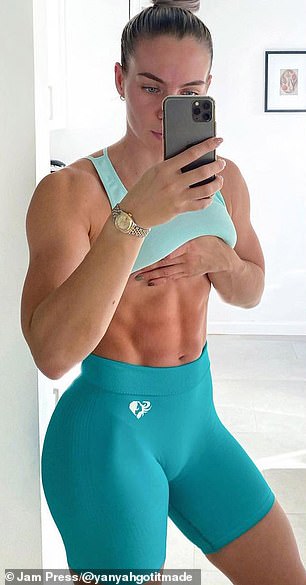 Benefits: Yanyah says that remaining active during pregnancy can help to eradicate many of the more negative symptoms, including body aches, nausea, and fatigue

‘Wooow, people are dumb. I am inspired by your strength and consistency,’ wrote one woman.

‘It makes me happy that you are calling these judgmental trolls out. You are an inspiration,’ added someone else.

‘Love your videos and strength! Currently seven months myself and struggling with intense round ligament pain when I lift heavy most days. Do you have and tips for that??’ asked one follower.

Generally, Yanyah will try to ignore the negative comments she receives, depending on how ‘ridiculous’ they are – and admits some of them even make her laugh.

She said: ‘I just keep going on with my day or I will sometimes shame them on my Instagram story for others to see.

‘The reason I share them at times is because I want others to know that negative, rude, and bad people are something we all deal with whether you have 30 followers or 300,000 followers. 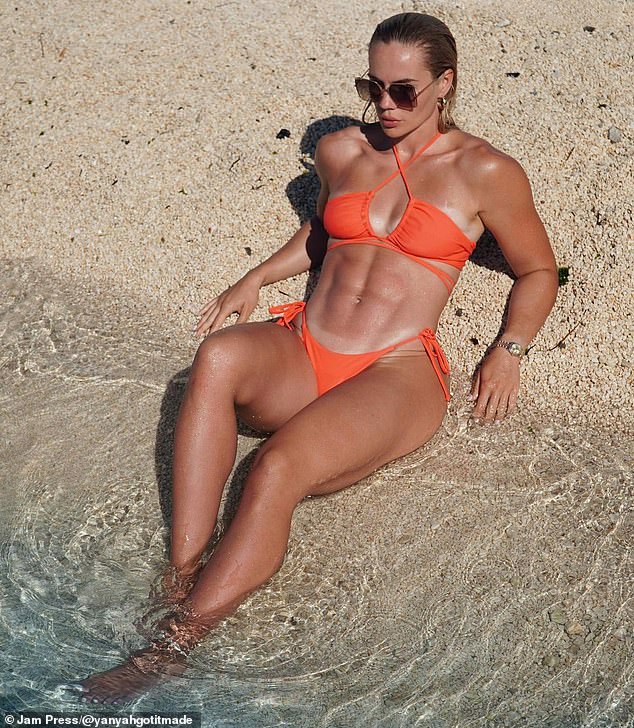 Impressed: She also says that pregnancy has taught her how ‘amazing’ the female body is

Sanctuary: In one candid Instagram post, Yanyah revealed that she first turned to the gym in 2014 (left) after struggling through five years of ‘mental, spiritual and extreme physical abuse’

Helping hand: Since sharing her video about the troll comments she faces, Yanyah says she has actually received an outpouring of support from other women

‘Their jealousy is just a reflection of their own insecurities and failures in life that they want to project on those who don’t live life out of fear, doubt, inactivity, or failure’.

At eight-months pregnant, Yanyah works out between three and six days per week, as well as conducts in-person client sessions for up to 12 people every week.

She said: ‘The women before us worked hard all day in fields, on farms, they fought for survival against all kinds of elements, and even through slave labor in so many different places and times.

‘If we were that fragile; there wouldn’t be humankind. We would have been extinct a long time ago.

‘This doesn’t mean I am saying that people should jump under the squat rack and put 315lbs on their back like I do because we need to remember that each woman is different, and each pregnancy is different – but instead focus on what makes you feel good.’

To all of her online haters, Yanyah has a clear message, saying: ‘I’m unbreakable.’

‘The noise of your opinions will never drown my inner voice.’