Home » Lifestyle » Premier poised to return to a different Victoria

Before he took on some wet steps and lost back in March, Dan Andrews had notched up many accomplishments. He was the state opposition leader who knocked off a first-term government, a feat not accomplished since 1955. He was the man who said firmly that repudiating the East West Link contract would cost nothing and, after becoming Premier, was subsequently shown to be out by many hundreds of millions of dollars.

That didn’t hurt him or the Labor Party at all. When he ran for re-election in 2018, he secured a massive swing and posted one of the biggest election victories in Victorian history. Come the COVID-19 pandemic in 2020, he and his government – and the state – hit a devastating low when Victoria’s hotel quarantine system proved to be a deadly shambles. Of Australia’s 910 COVID-19 deaths, 820 have happened in Victoria. 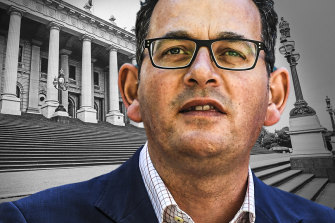 Daniel Andrews hit a devastating low when Victoria’s quarantine system turned out to be a deadly shambles.Credit:The Age

Andrews locked down the state, called an inquiry and then took the counter-intuitive course of attending daily media briefings for weeks on end. The briefings became pieces of performance art, dragging on for hours at a time until the reporters ran out of things to ask or, sometimes, assert. Until the next day, when it would happen all over again. Broadcast live, the media conferences were a cross between 19th-century pugilistic bouts with unlimited rounds and the Ring cycle in slo-mo, designed to fascinate and exhaust all involved.

By year’s end, the Premier was still standing strong. He avoided defenestration easily but senior bureaucrats, including his own department head as well as his health minister, had left their positions by the end of the examination into the hotel quarantine mess. He had lost some support within the community, but not as much as might have been expected, and many of those who backed him – especially on social media – exhibited a cult-like devotion to this tightly wound, always mysterious leader of the state.

Having made it through the above, on the Labour Day holiday, Dan the Amazing was laid low not by his administrative missteps or misjudgments but by a mere set of slippery stairs, which drew him into a vanishing act due to come to an end next Monday, when he returns as Premier.

Will Victorians see a different Dan after his accident and recuperation? The mindset of the Victorian electorate has changed in his absence. The recent hard lockdown, with its long tail of behavioural mandates still restricting what most of us are allowed to do, did feel like an inflexion point, a moment when Victorians had had enough of one-size-fits-all health measures.

Of course, Andrews was not the man in charge when this most discomfiting of lockdowns was imposed; his deputy James Merlino was the one who had to implement and defend it. But it will be Andrews who has to navigate the next few months as the vaccine rollout hits some slow(er) spots before the supply ramps up closer to the end of the year.

The experience of operating under a different leader for more than three months has been salutary for more than a few members of the government. Andrews has been Labor’s leader since late 2010, so to have a quieter and less alpha man heading cabinet and the caucus has been, for some MPs, a bit like having the young, friendly student teacher running the classes rather than the usual teacher who knows how to get the class to quieten down with a tightening of the shoulders, a tart comment and a swivel-eyed glare.

Andrews is respected by his colleagues and is in no danger. But the feedback among ministers has been that cabinet meetings have been more relaxed under Merlino. Chiefly because of his position as deputy, Merlino has been mentioned in the past as a possible successor to Andrews but always as a less likely option than Transport Infrastructure Minister Jacinta Allan. Allan, like Andrews, belongs to the party’s left, while Merlino hails from the biggest section of the ALP’s right, the shop workers’ union.

He has definitely burnished his credentials as a future leader while filling in for Andrews, giving the strong impression that he’s enjoyed it. That said, he’ll be relieved to be making way for the genuine article.

It’s a relentless job and that suits Andrews’ skill set. When Merlino announced lockdown No. 4 he took a leaf from Andrews’ book and placed the blame on the Morrison government, citing its light-touch approach to vaccines and hotel quarantine. But those early lines of attack got a little lost until the past few days when Merlino started running hard on vaccine supply again, slamming Morrison for what he says is a failure to secure Pfizer vaccines when they were on offer.

If you want to identify the difference between life under Merlino and Andrews, that is probably it: once Andrews starts punching, he doesn’t let up.

Shaun Carney is a regular columnist.

Woman, 38, left with ‘dog bite’ hole in her cheek due to excessive sunbed use

Why ‘Harriet’ Doesn’t Mention the $20 Bill