The Morrison government wants states to agree to standards for wildlife protection that fall far short of those proposed by a landmark review of environmental laws, critics of the proposals say.

The leaked Interim National Environmental Standards proposed for agreements between the Commonwealth and states and territories reveal ambitions that don’t match those recommended by an independent review of environmental laws by Professor Graeme Samuel. 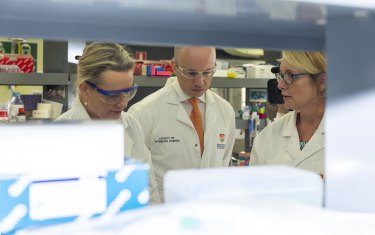 The leaked 19-page document, which covers only part of the so-called Matters of National Environment Significance, show the government has largely sought to reproduce existing clauses in the Environment Protection and Biodiversity Conservation (EPBC) Act rather than improve it.

For instance, Professor Samuel’s call for safeguards to be “enhanced” is not echoed in the standards being put to the states, and demands for “best available” information becomes a requirement only for “adequate” assessments.

Similarly, the need to address “detrimental cumulative impacts” on species at risk, as recommended by Professor Samuel, is absent from the proposed standards. His call for plans that “must be prepared and implemented to monitor and evaluate outcomes of actions” is also absent in the offering.

“Rather than providing genuine guidance for decision making, the government’s proposed standards are cut-and-paste from the existing EPBC Act, which has overseen the destruction of habitat for threatened species like the koala,” Ms O’Shanassy said.

“The states and territories should reject the government’s proposed standards and support the national environmental standards put forward in Professor Samuel’s independent review of the Act.”

NSW may be one of the first states to break ranks with the federal government with Environment Minister Matt Kean describing Professor Samuel’s recommendations as “outstanding”.

“What I want to see is the strongest environmental standards enforced with a strong environmental watchdog,” Mr Kean told reporters at an event with his federal counterpart Sussan Ley on Thursday. “We support the direction [Professor Samuel] was taking.”

‘These standards are so loosely worded that almost anything could be argued to be consistent with them – even the current situation.’

NSW is concerned that the proposals don’t meet the goals on improving wildlife protection and the proposed “watchdog” or “environmental cop” won’t have sufficient power to enforce the laws.

Minister Ley responded by saying she had “always said that we will have an independent cop on the beat to oversee the operation of bilateral agreements when we accredit states against our strong national standards”.

The standards proposed by the government are part of its plan to streamline environment laws to create a “single-touch” approach to approvals.

Ms Ley told the reporters the standards would “have rigour, they have certainty and they allow a strong bilateral agreement with the states”, adding “we will lift standards and lift environmental protections”. 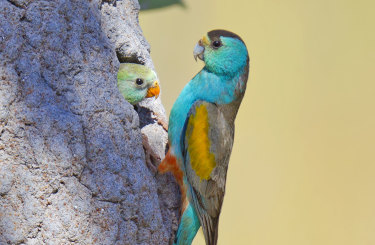 Species such as the highly endangered golden shouldered parrot are among those at risk. The Morrison government is hoping to sign ‘one-touch’ approval agreements with the states and territories that critics say won’t do enough to reverse the threats for many species. Credit:Via Bush Heritage

Concerns about the proposed bilateral agreements is widespread within environmental groups.

“The [Morrison] government’s proposed standards have no ambition to improve Australia’s deteriorating environmental trajectories,” Nicola Beynon, head of campaigns in Australia for the Humane Society International, said. “Neither will they mitigate any of the grave risks of handing over decision making for matters of national environmental importance to states and territories”.

Martine Marone, a professor at the University of Queensland, said the states have widely varying approaches to managing the environment and protecting threatened species and their current approaches were enabling continued decline.

“For example, threatened bird populations have declined by almost 50 per cent since 2000, and mammals by 25 per cent,” Professor Marone said. “Hundreds of thousands of hectares of woodland and forest are still being cleared every year.

“These standards are so loosely worded that almost anything could be argued to be consistent with them – even the current situation.”

The ACT government, meanwhile, says it is yet to receive the standards it is supposed to be agreeing to.

“Minister Sussan Ley has not written to me as the Environment Minister to provide me with a copy of these standards,” ACT Minister for Environment Rebecca Vassarotti said.

“I have written to Minister Sussan Ley to express my deep concern about this murky process and express my support for Professor Samuel’s recommendations.

“The federal government needs to respond with a genuine commitment to overhaul Australia’s environment laws, including establishing new independent bodies to hold corporations and governments to account.

“In Professor Samuel’s own words, the federal government can’t ‘cherry pick’ from the suite of recommendations.”

How Could J.J. Abrams Follow ‘Star Wars’? ‘I’d Love to Direct a Play’