A RARE Blue Peter 50p coin has sold for £286 on eBay after one keen coin seller listed it just weeks ago.

The rare coin features a picture of the Olympics as drawn and depicted by a young Blue Peter viewer back in 2009. 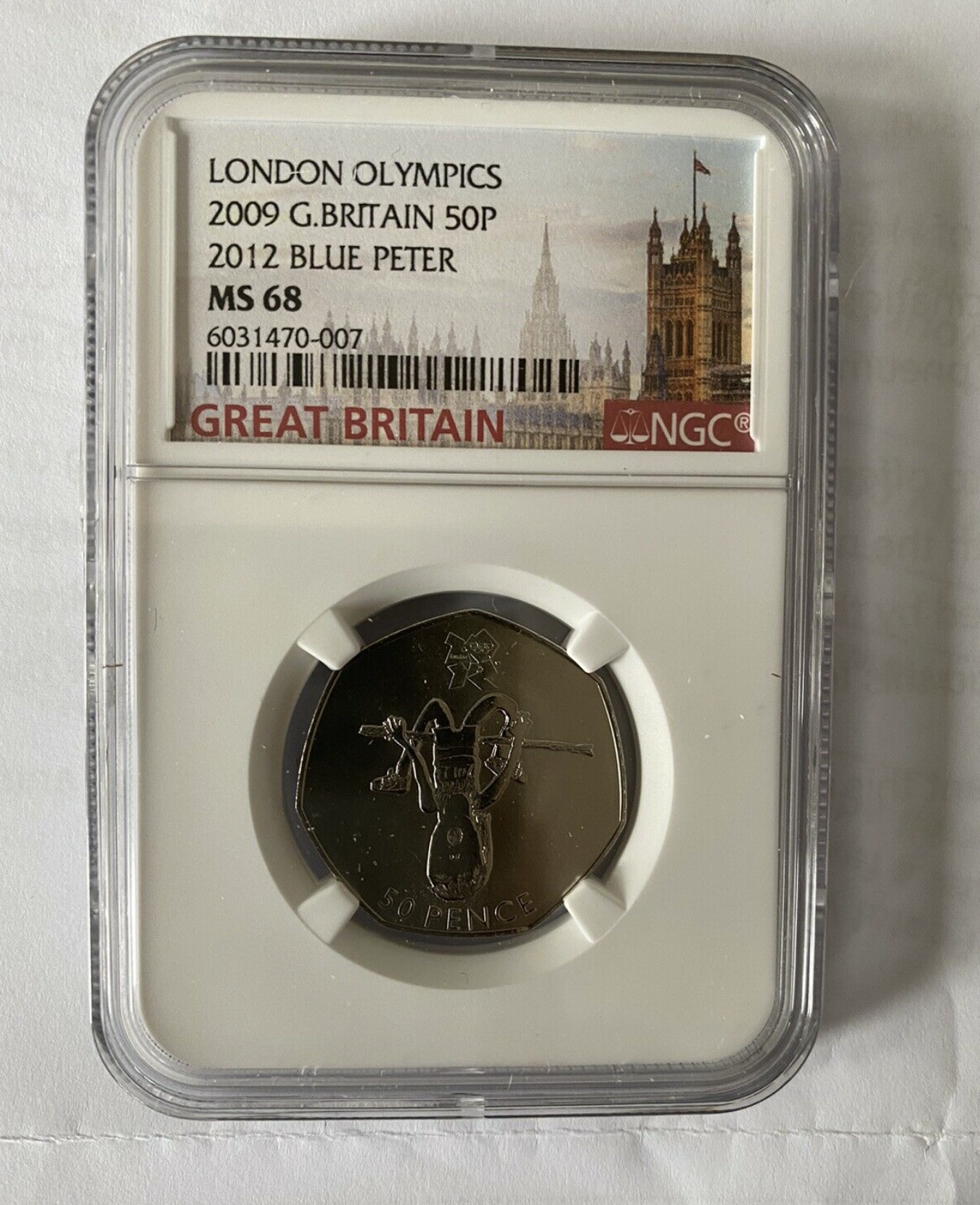 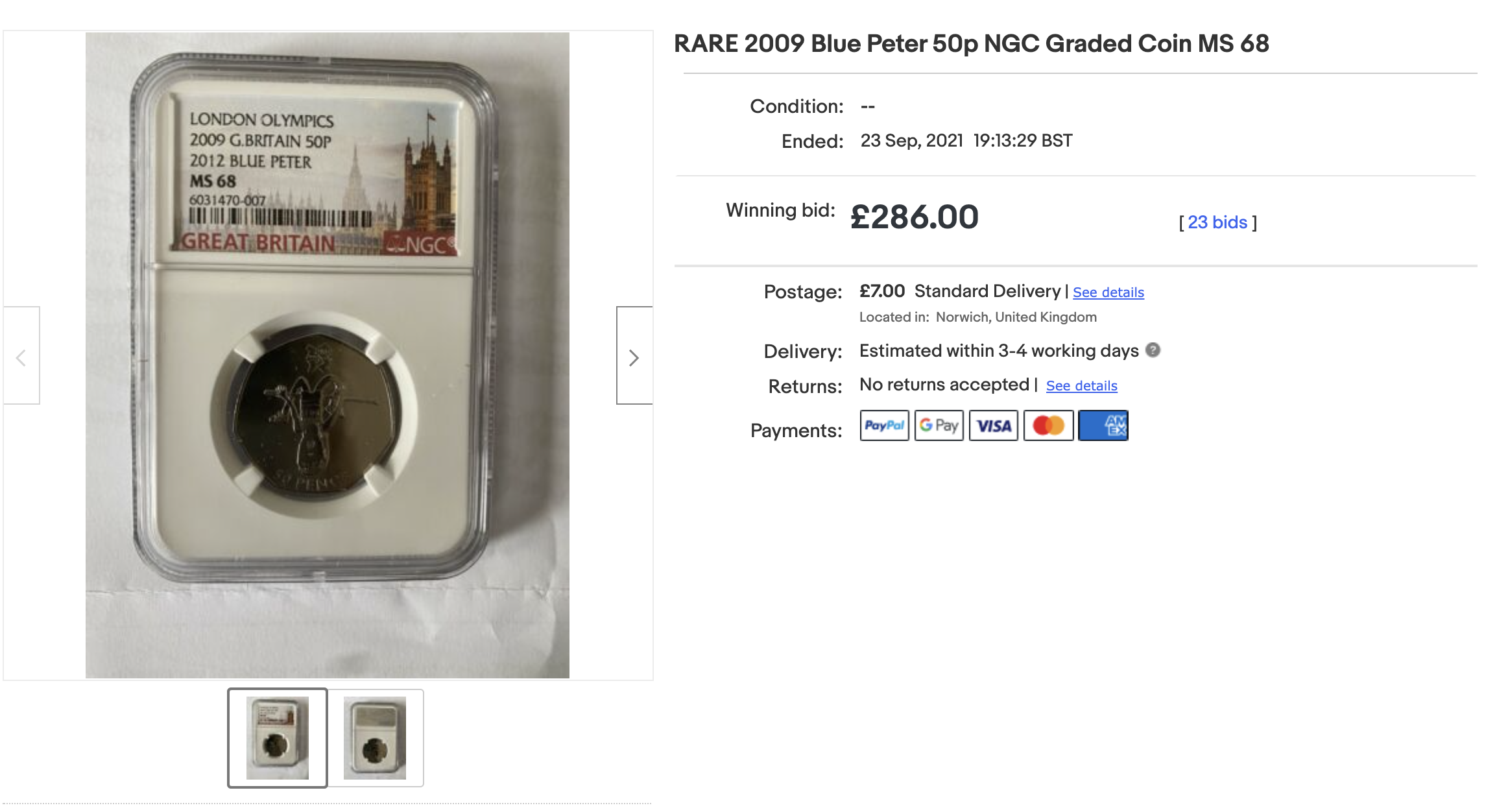 The Blue Peter Olympic 50p shows an athlete doing the high jump and was drawn by nine-year-old Florence Jackson after she won a competition on the kids TV show.

Along with this rare version, there were 26 different designs released to celebrate the sporting event held in London in 2012, and collectors are still keen to snap any of them up.

Around 2.2million of the Blue Peter coins were minted in 2011 and released into circulation, but an earlier version of the coin was minted in 2009 and is much more valuable.

Only 20,000 of these were made, making them rarer and worth more.

In the recent £286 listing, the 2009 date is advertised, so this could explain why it has managed to sell for such a hefty price.

Over seven days, 10 different bidders placed their offers on the rare 50p.

They kicked off with a £3 bid that rocketed to nearly £300 just under a week later.

The listing closed on September 23, as the winning bid came in at £286, meaning the coin sold for 572 times more than its face value.

When the 2009 Blue Peter coins were made they could be bought from the Royal Mint for £1.99, which still makes the latest auction price a 143-fold increase on the original face value.

These coins were never officially put into circulation when they were minted.

However, you could still use the 50ps as currency in everyday transactions if you weren't fussed on the rarity, so it's easy to see how versions could have slipped into people's wallets and spare change over time.

How to spot a rare coin in your change

We have already seen the coin sell for just over £200 before, as one went for £205 back in April.

It was also previously valued at £100 before that.

But as of late we haven't seen the coin fetch quite as high a price as this most recent September listing.

It gives other avid coin collectors a good idea of how much the 50p can be sold for on similar sites and eBay, too, if they happen to have a version themselves.

Online tools from change experts like Coin Hunter are helpful to see how much it could be worth.

You can also refer to Change Checker's latest scarcity index update to see which coins are topping the charts in terms of value, and The Royal Mint has recently published its own account of the rarest coins in circulation.

If you're looking for other ways to verify the coin, the number of bids on the listing can help you establish if a coin and the amount it has sold for is the real deal.

When the Blue Peter coin sold towards the end of September, it had racked up a total of 23 bids, showing collectors were keen.

The seller has a very positive profile on eBay too, and previous reviews of their products include one that says: "Beautiful coin and fast delivery A*", which helps provide reassurance that the items on offer are genuine.

But remember that on eBay a buyer could pull out, which means the coin won't have sold for the price it appears to have.

The best personalised gifts for Christmas 2019