See Washington’s hilarious response when Kimmel said he wanted to give her and Witherspoon a New Year’s kiss.

There are over three months left of 2020, but Reese Witherspoon and Kerry Washington are ready to fast forward to the new year.

During the 2020 Emmy Awards on Sunday, which was a virtual event amid the coronavirus pandemic, the “Little Fires Everywhere” co-stars threw an outdoor New Year’s Eve-themed party in Witherspoon’s backyard. The actresses and their pals were all decked out in NYE attire, including colorful top hats and gold glasses that read “2021” or “celebrate.” 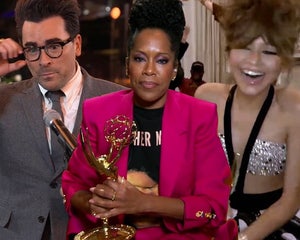 While chatting with Emmys host Jimmy Kimmel via video chat, Witherspoon and Washington, whose show was nominated for Outstanding Limited Series,” were asked why they decided to have a New Year’s Eve party.

“Well, cause we’re ready for this year to be over,” Witherspoon explained, as she grabbed her champagne flute.

“You can do that? You could just end the year?” Kimmel asked, to which Witherspoon joked in reply, “Well, yeah, I mean, we’re Emmy-nominated television producers.”

Washington then said it was time to get the party started and proceeded to initiate a countdown to the new year.

When Kimmel noted it wasn’t even close to being midnight, Witherspoon pointed out, “But who really knows what [time] it is?”

After they completed their countdown and cheered, Witherspoon and Washington both said they wish they could kiss each other. The two weren’t able to as they were practicing social distancing, of course.

However, Kimmel expressed that he wanted to be a part of the fun too. “Oh, I wish I could kiss you guys too!” he said, as Washington quipped, “No, we don’t want that!”

“Wow, it’s going to be a great new year,” Kimmel said with a laugh.

Watch it all go down in the clip, above!

Got a story or a tip for us? Email TooFab editors at [email protected].

JoJo Siwa Has a Dance Moms Reunion Outside of the Studio