RICHARD LITTLEJOHN: When will the Leftist superannuated student activists grow up and stop monstering Maggie?

When I heard that some imbecile had chucked a few eggs at the newly erected statue of Margaret Thatcher in Grantham, I naturally assumed the culprit was probably a spotty student with purple dreadlocks and industrial-strength halitosis.

In my mind’s eye, I envisaged a Wolfie Smith wannabe in torn jeans, scuffed Doc Martens and an Army surplus jacket plastered in CND and Black Lives Matter badges.

So I was somewhat taken aback when the photographs showed a portly gentleman of a certain age with a white beard and what appeared to be a copy of the Guardian tucked under his arm. 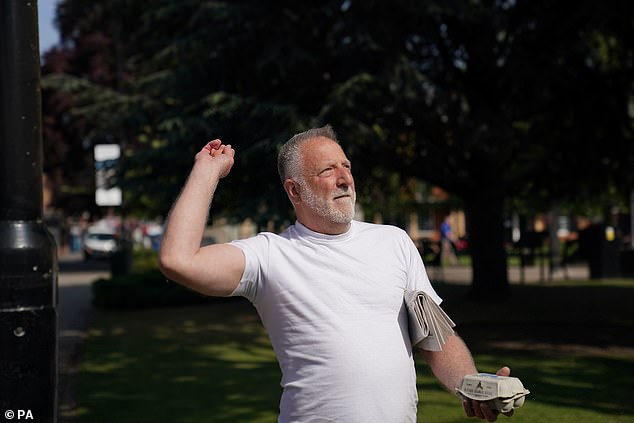 A man throws eggs at a statue of Baroness Margaret Thatcher as it is installed in her home town of Grantham, Lincolnshire on Sunday

Bloomin’ heck, I thought. Or words to that effect. He’s almost as old as me.

Turns out the Egg Man looks more like a walrus.

He was named as 59-year-old Jeremy Webster, deputy director of an arts centre attached to Leicester University.

On Sunday morning, when some of us were enjoying a leisurely breakfast, flicking through the newspapers and planning a gentle constitutional in the late Spring sunshine after watching the early kick-off at Spurs on TV, Webster had a better idea.

He pulled on an inappropriately tight white James Dean T-shirt, took a box of eggs from his fridge and set off to throw them at a lump of bronze.

Only one of them hit the target. Two others missed completely.

Perhaps he’d left his bifocals on the bedside table. Either way, he shouldn’t expect a call-up to join the England cricket squad for the coming series against New Zealand.

Come to think of it, why did he throw only three eggs?

He was carrying a box of half a dozen. Maybe he kept a few back for a restorative brunch after all his exertion.

Or else he planned to drop them off at the nearest food bank, to help feed vulnerable locals forced to choose between eating and taking a second foreign holiday this year.

After all, he’d tipped off the Grantham Bugle and had taken an accomplice along to record his historic act of civil disobedience on a mobile phone.

You’d have thought he’d want to milk it for all it was worth.

Once he’d got his eye in, the last three eggs may have hit Thatch smack in the kisser, instead of dribbling pathetically down the hem of her gown.

One hundred and EIGHTY!

Goodness only knows what this idiotic display of political onanism was meant to achieve.

The statue had only been lowered into place an hour earlier.

Webster advertised his fatuous stunt on social media, describing it as a ‘call to arms’. 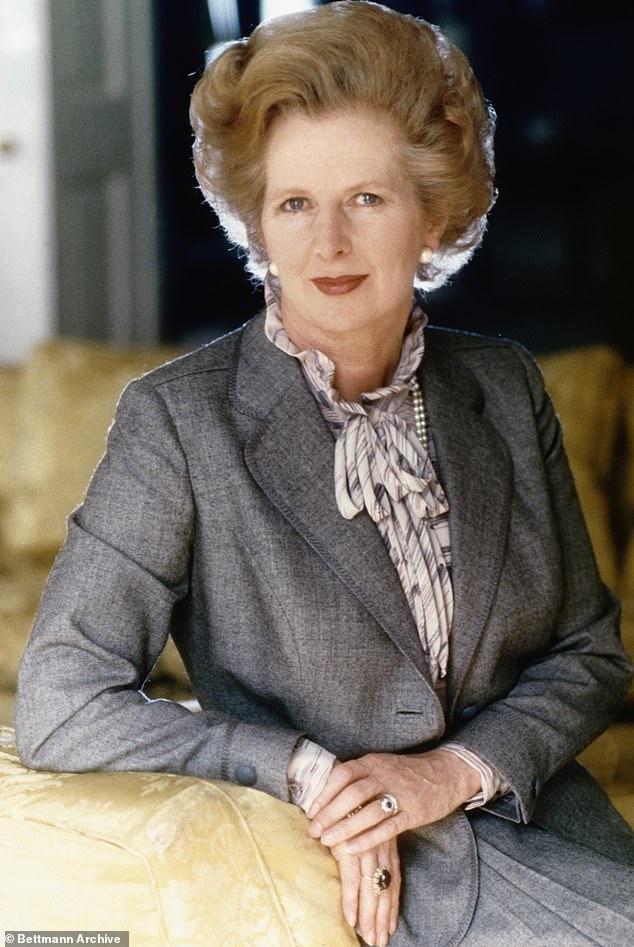 The Rt. Honarable Margaret Thatcher, the former Prime Minister, First Lord of the Treasury and Conservative Member of Parliament for Finchely, Burnet in 1983

Is he expecting the good people of Grantham to rally to his cause and give Mrs Thatcher the Edward Colston treatment?

Sorry, but statue-toppling is so last year, dahling.

Mind you, that won’t stop the usual suspects attempting to vandalise the monument. Thirteen thousand people have apparently signed up online to throw eggs at it, but so far only Webster has been stupid enough to follow through on the threat.

The local council has been forced to put the statue on a 10ft high plinth and installed CCTV as a deterrent.

Even so, that probably won’t prove enough to put off determined self-righteous ‘social justice warriors’ seeking their 15 minutes of foolishness.

What does it say about us as a society that a statue commemorating our first female Prime Minister in her home town, paid for by £300,000 in public subscriptions, has to be put under 24-hour surveillance against criminal damage?

Even more profoundly depressing is the fact that the first vandal out of the blocks is an allegedly educated man about to enter his seventh decade.

Don’t these people ever take a day off? Sadly not.

Britain appears to have spawned an entire generation of overgrown student union protesters, decades past the first flush of youth. Some of these menopausal morons are already drawing their pension.

So I guess we shouldn’t be all that surprised that a 59-year-old art gallery administrator is behaving like a hormonal first year revolutionary reading diversity studies at a former polytechnic.

Even his own 87-year-old mother-in-law, a Thatcher fan, called him ‘childish’.

There are legions of these people, mostly employed in cosy sinecures in the public sector, salving their agitprop consciences at taxpayers’ expense.

Take Wolfie Webster. He seems to have spent his entire career sucking on the public teat.

Before he got his latest gig in Leicester, he was head of exhibitions at a craft and design centre in that internationally renowned cultural citadel, Sleaford.

Prior to that, we are told he spent a decade in ‘various roles’ at Lincolnshire County Council.

I’m only guessing here, but I doubt he worked as a dustman or roadsweeper.

What continually puzzles me is how the Left manage to get so angry about the past.

Admittedly, it’s cost-free compassion, allowing them to flaunt their bogus virtue without actually having to do anything other than a bit of shouting and the occasional burst of mindless vandalism.

OK, so Mrs Thatcher was a divisive figure, according to the textbook Leftist definition of ‘divisive’ meaning anyone they disagree with. 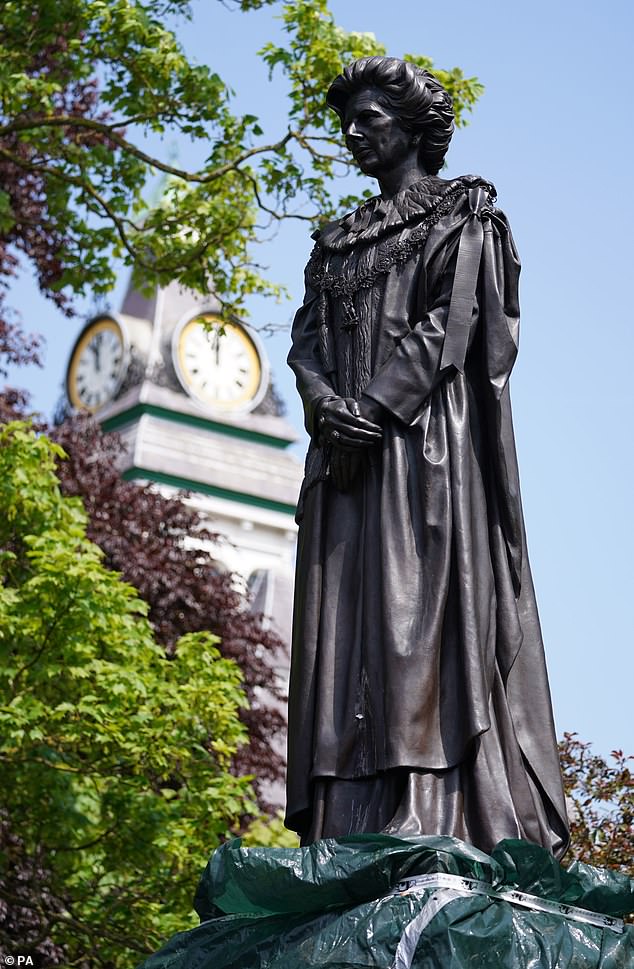 The newly installed statue of Baroness Margaret Thatcher in her home town of Grantham, Lincolnshire on Sunday

But she rescued Britain from terminal decline. Yes, there were casualties, but as I am sure Wolfie Webster would concede: you can’t make an omelette without breaking eggs.

Traditional mining and industrial communities were hard hit in the 1980s by a combination of harsh economic reality, cheap foreign competition and trades union militancy.

But that wasn’t confined to these shores. Look no further than the Middle American Rust Belt and the devastated Appalachian coal towns.

For the record, Labour closed more coal mines than the Thatcher government.

And Barmy Arthur Scargill’s suicidal year-long strike, aimed primarily at bringing down a democratically elected Conservative government, did for the rest.

More moderate union leaders acknowledged that Thatcher was a necessary corrective to the institutionalised decay and resistance to modernisation.

While politically opposed to many of her policies, patriotic union men like Terry Duffy of the engineering workers and the electricians’ Eric Hammond not-so-secretly admired Mrs T’s determination to revive our moribund economy.

Don’t forget, either, that she won three consecutive General Elections and in the process helped drag the Labour Party into the real world, even though it has been regressing in recent years under a succession of hopeless leaders who have either forgotten or chosen to ignore the lessons of history.

Ordinary voters had much more time for Thatcher than their self-appointed ‘champions’ on the Left maintained.

Outside of the smug metropolitan tendency, hatred of Mrs Thatcher today would appear to be concentrated in parts of the North of England, Manchester and Liverpool in particular.

But both these great cities benefited long term from economic dynamism ignited by her government.

When I went to Liverpool during the 1980s, after it had fallen into the hands of Militant, the city was on its knees. 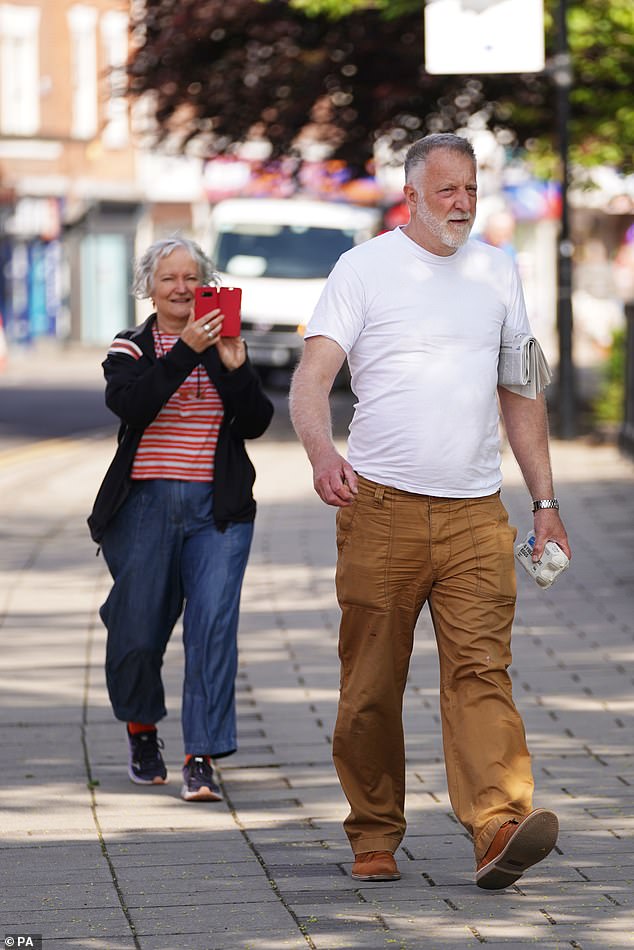 Since then it has been transformed, especially the magnificent Albert Dock development, which was kickstarted by Tory Michael Heseltine in the wake of the Toxteth Riots.

Manchester is now a vibrant modern metropolis, far removed from the run-down post-industrial conurbation of old.

Not that the Left will ever acknowledge the Thatcher catalyst. But they could at least show a little respect.

The hysterical ‘Ding Dong, The Witch Is Dead’ reaction to her death in 2013 was both distasteful and a disgrace to a supposedly civilised nation.

The antics of all those middle-aged Guardianistas who went along to the funeral procession simply so they could turn their backs on her coffin was beyond nauseating.

But if anyone deserves a statue it is our pioneering first female PM who saved the nation from the suffocating, debilitating stranglehold of old-school socialism.

The self-congratulatory Wolfie Websters of this world should at the very minimum have the common decency to refrain from vandalising her monument.

It’s time they all grew up.

What is a bingo jackpot? Find out how to win a jackpot on Sun Bingo | The Sun