Scott Morrison was almost out of the gates after his brief visit to the Sydney Royal Easter Show when a man holding a beer ran up.

The collective eyebrows of the media advisers near Morrison shot up.

But there was no repeat of the infamous Black Summer poor reception Morrison received in the NSW town. Cattle farmer Christopher “Rocky” Allen, son of Cobargo’s mayor, just wanted to give the PM a hat branded with his stud name, Rockstar Cows.

It capped off a reasonably successful tour of the cattle and alpaca pavilions, despite fears from the advisers about the risks of Morrison’s first major public appearance of the election campaign.

There was a mixed reception from people who spotted the prime minister amid the scrum of media and increased security, but those who didn’t like him kept their feelings largely limited to mumbling to their companions.

“Oh, it’s Scott Morrison. I just wanted to look at cows, I didn’t come for this,” one woman said.

Others blew kisses, waved or called out “ScoMo” – and everyone pointed their phone camera in his general direction.

With wife Jenny and daughters and Abbey and Lily in tow, Morrison patted cows, alpacas and Luna the llama and shook dozens of hands.

The half-hour visit was a contrast to his 90-minute tour of the show during the 2019 campaign, when Morrison wandered through the show farm, fresh food and showbag pavilions and jumped on a ride with his daughters and then-deputy prime minister Michael McCormack.

Earlier, Morrison stocked up on chocolates for his family when he stopped in at Wallies Lollies in Melbourne’s ultra-marginal seat of Chisholm. He met Treasurer Josh Frydenberg and local MP Gladys Liu there but neither faced media questions; the prime minister opted to hold a solo press conference at the airport before jetting to Sydney.

“I had a chat with Jen this morning about where the various egg purchases were up to,” Morrison said. He added several chocolate figurines and a decorative raffia rabbit statue to that total.

“Prime minister, are you a sweet or sour kind of guy?” a reporter called out.

Frydenberg’s young children Gemma and Blake were having the best time, catching packets of jelly beans and chewy candies as they shot off the shop’s new sorting machine. 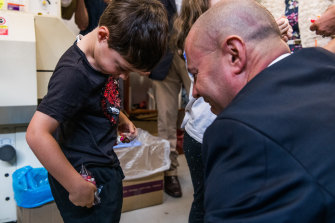 “What a haul!” Morrison cried as five-year-old Blake stuffed as many as he could into his pants pockets (with the owners’ consent).

“You should have come in a fishing jacket, you could have walked away weighing twice as much as when you came in.”

Thousands of kilometres to the north, Anthony Albanese was spending his first full day in Queensland as part of the campaign.

Queensland, where the LNP holds 23 of its 30 seats, is pivotal to Labor’s hopes of moving back to the government benches. But it took almost a week before either Albanese or Morrison made his way north to the state. 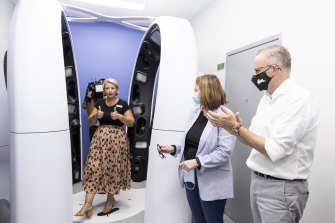 Albanese went almost as far north as he could and still be in Queensland, making a run to Cairns which sits in the electorate of Leichhardt.

After a morning radio interview and another lively press conference, Albanese went for a quick trip to FNQH Cairns Skin Cancer Centre to promote a Labor announcement on melanoma nurses.

The centre has the only private sector 3D mole mapping machine in the country. People, normally stripped to their underwear, have a full-body image taken.

The machine can identify lesions as small as a millimetre, enabling doctors and nurses to detect skin changes that could be a melanoma.

As Labor candidate Elida Faith posed in the machine for photographs, Albanese joked about where his “bunny tattoo” might be located – and how the machine was unlikely to find it.

Safe in rugby league country, he joked with young A.J. Rajeswaran – son of registered nurse Talia Rajeswaran – about another A.J., Alex Johnston, who scored two tries for Albanese’s beloved South Sydney in their Good Friday victory over the Bulldogs.

Jacqueline Maley cuts through the noise of the federal election campaign with news, views and expert analysis. Sign up to our Australia Votes 2022 newsletter here.

Why did Bill Wyman leave The Rolling Stones? | The Sun

The 234 areas where Covid cases are still rising – is YOUR area on the hotspot list?