Aged care providers are calling on the federal government to create a special visa to bring workers from overseas to fill widespread shortages in the sector as Australia’s borders open. 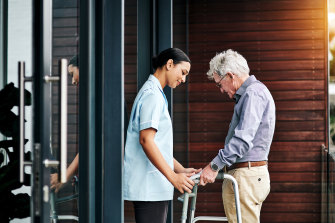 “We need the barriers to migration to be lifted,” Aged and Community Services Australia chief executive Paul Sadler, who co-signed the letter, told The Sydney Morning Herald and The Age.

Unions, however, say foreign workers are not the answer and wages in the sector must lift, but a Fair Work Commission case seeking a 25 per cent increase will not be heard until next year.

The 2020 Aged Care Workforce Census estimated there were 22,000 vacancies in direct care roles across the aged care sector in November and employers across the economy are competing over the 79,600 skilled migrants able to enter the country by July 2022.

The Committee for Economic Development of Australia has warned of a looming shortage of 110,000 aged care workers over the coming decade.

Mr Sadler called on the government to put aged care workers on the skilled occupations list, which includes registered nurses but not personal care workers or enrolled nurses, and for a lifting of restrictions on geographic areas overseas workers can be employed in.

“We’re facing major challenges, because of a whole range of competing forces resulting in high demand for staff and a very low response in [job] applications,” Mr Rooney, who also signed the letter, said.

“Right across the aged care industry, members are telling us it simply has not improved,” he said.

“We still don’t have a sustainable funding or staffing fix that lifts this industry out of crisis … Providers are more interested in importing workers on temporary visas than lifting wages.”

The Aged Care Watch site, administered by the United Workers Union, has recorded more than 4290 reports of unfilled shifts since it launched in July.

Aged Care Workforce Industry Council chief executive Louise O’Neill said migration was just one part of the solution, saying the sector – which has an annual staff turnover rate of about 30 per cent – needed to create attractive career pathways for young Australian job seekers.

“Getting the wages right is going to be fundamental to growing the sector,” Ms O’Neill said.

“Aged care suffers from a negative image, yet it’s a massive industry.”

Professor Kathy Eagar, director of the University of Wollongong’s Australian Health Services Research Institute, said the industry’s high turnover rate was due to “poor pay and conditions” and creating a special visa “will just put a Band-Aid” on the problem.

“This is a workforce we shouldn’t have to import,” Professor Eagar said. “In the long term, we need to improve the attraction and retention of aged care workers in Australia.”

She said aged care workers earned less than they would at a supermarket checkout.

“We are confident as borders reopen and the vaccination program nears completion, the acute pressures on the aged care staffing will ease,” he said.

He said international students on temporary visas were helping fill gaps thanks to the government’s easing of visa rules, allowing them to work more than 40 hours a fortnight.

The Fair Work Commission process was independent of government, he said.

Fascinating answers to perplexing questions delivered to your inbox every week. Sign up to get our new Explainer newsletter here.