A cheeky note left a Birmingham resident baffled after he was asked not to hang his washing in public view because it’s ‘unsightly and unpleasant’.

Tom Squires was stunned to find the snobbish request pushed through his door in leafy Harborne when he woke up on July 20.

It was addressed to ‘tenants’ and said: ‘On behalf of all residents of Clarence Road please would you kindly take your laundry out of the public view as it’s rather unsightly and unpleasant.

‘Many thanks. Clarence Road Residents Group.’ 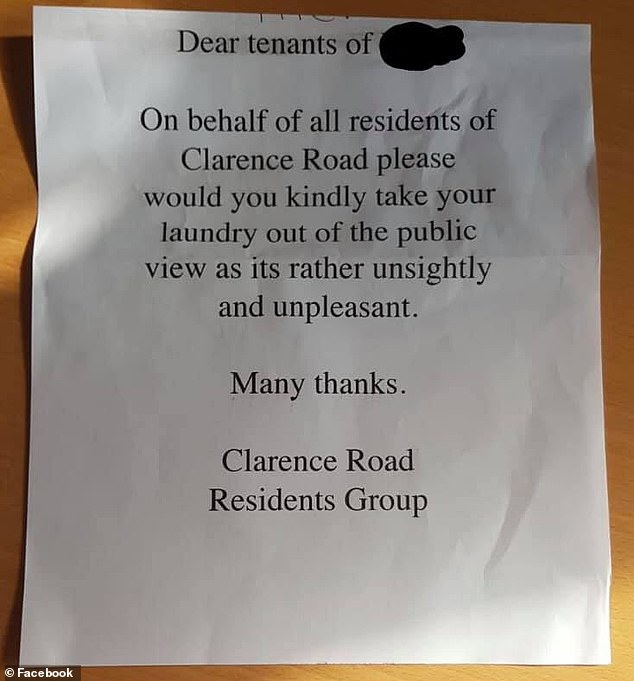 Tom Squires was stunned to find the snobbish request pushed through his door in leafy Harborne when he woke up on July 20.

Tom posted a picture of the note on the Harborne Community Facebook page, asking for details of the residents group – but no one he contacted had ever heard of the organisation.

His post read: ‘Good morning, does anyone have any contact details for Clarence Road Residents’ Group? We’ve awoken to find a note posted through our door and would like to speak to them. Thanks in advance.’

But Harborne councillor Jayne Francis said she had no idea such a group existed – as did dozens of locals commenting on the post.

She said: ‘Didn’t know that Clarence Road had a residents group. If so, I think the note re: washing is a bit over the top!’

Other residents living on the street also shared their experiences – with one claiming he was asked not to wash her car outside. 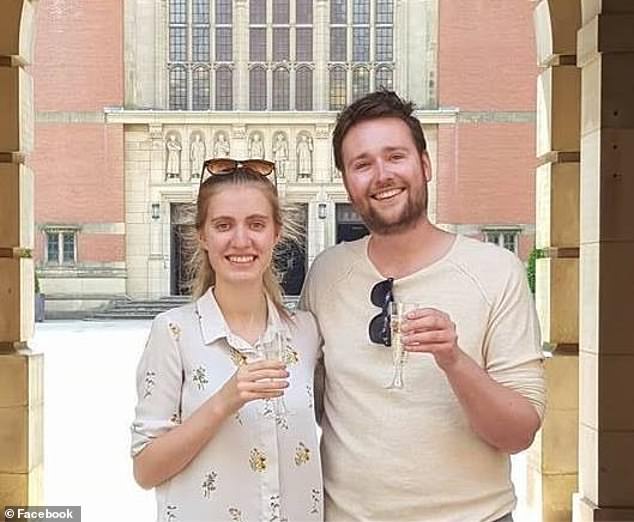 Tom posted a picture of the note on the Harborne Community Facebook page, asking for details of the residents group – but no one he contacted had ever heard of the organisation

Dani Geordie Scarlet said: ‘Welcome to Clarence Road, mate. We got asked not to wash our car in the street not long after we moved in (no joke!).

‘And yeah, the decent neighbours on our street as you can see are not weird enough to be staring and observing your washing with nothing better to do.’

Josie April also said she had a message asking her not to hang washing on her balcony.

She added: ‘I had a message recently saying we’re not allowed to put laundry in the public view aka on our balconies for “health and safety”, load of b******. People got issues with seeing someone’s pants? Need to get over themselves.’ 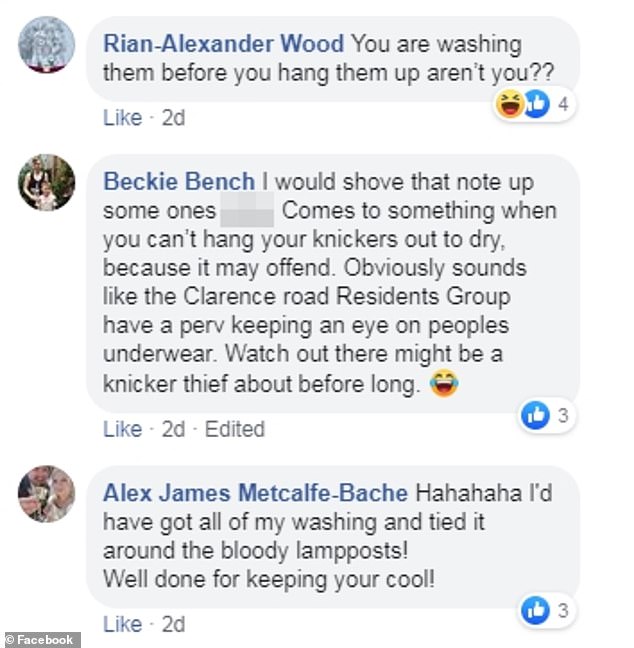 Other residents were appalled by the rude note, though many saw the funny side and joked if Tom had been hanging out dirty washing

The request to remove washing has since sparked fury with other residents, who say ‘people need to get a life’.

Nelly Bencomo said: ‘What kind of cloth you hang out there to get this aggressive note?’

Louise Gossage commented: ‘People really do have too much time on their hands. Trying to save the planet by drying your washing outside in the sunshine, like people have been doing forever, how very dare you!’

Tracy Davis wrote: ‘Some people need to get a life! Keep on hanging it out!’

Michelle Slater added: ‘Blimey, this is beyond ridiculous. It’s your garden – hang whatever you b***** well like.’

Tom responded to comments on the thread, thanking his fellow residents for their comments and support, adding: ‘We haven’t heard from the residents’ group but as I teach my students at school, it’s always better to resolve objections/conflict through dialogue so if you would like to discuss further please feel free to knock.’