Treasurer Josh Frydenberg is continuing to support his Victorian Liberal colleague Michael Sukkar after further allegations were made about the Assistant Treasurer’s faction misusing taxpayer resources to strengthen his political power base.

Personal correspondence from Mr Sukkar, revealed in The Age, the Sydney Morning Herald and 60 Minutes, show he was aware of a scheme where his brother, best friend and factional allies were paid by taxpayers for political work. 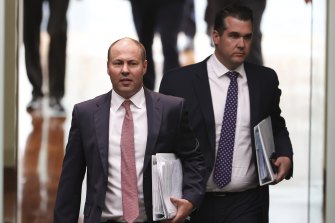 “It is extremely disappointing that 60 Minutes would again publish unproven claims from 2017 from a discredited and disgruntled former staff member, whose accusations have already been shown to be false and malicious,” he said.

“I have never authorised my staff to undertake activities contrary to applicable policies and guidelines when they are being paid to serve the constituents of the Deakin electorate.”

“I support Michael as I do my other colleagues,” he said.

Both ministers pointed to an investigation the Finance Department did after the allegations were first aired.

Mr Sukkar said every allegation in the latest reports had already been examined by the department.

“The review did not find any breach or improper conduct and the statement by the Finance Department can be found [online], which heard from multiple former and current staff members who all contradicted the claims made by 60 Minutes’ sources,” he said.

Finance said in a statement in October 2020 that it had concluded there was no basis for further investigation or to refer the matter to the Independent Parliamentary Expenses Authority.

It based this on an examination of departmental records and written statements from Mr Sukkar.

However, the department has refused multiple freedom of information requests to release the entire review report after Mr Sukkar “made strong representations that release is not authorised”.

Mr Sukkar has apologised to Financial Services Minister Jane Hume for disparaging comments he made in private messages to factional allies in 2018 which were also reported by this masthead.

“I have worked closely with Senator Hume in the last three years since both becoming Ministers in the Treasury portfolio where she has done an outstanding job,” he said in his statement.

“They should never have been said, they were unfair, and Michael has rightly apologised for that,” he said.

This portable ultrasonic cleaner removes up to 99.99% of bacteria