Japanese ambassador Shingo Yamagami says democracies such as Australia must not allow China to dominate the Asia-Pacific, warning the carnage in Ukraine could be repeated if Beijing attempted to seize control of the self-governing island of Taiwan.

Yamagami said the prospect of a Chinese invasion of Taiwan was a “serious concern to Japan”, which has dramatically increased defence spending and deepened ties with the United States and Australia to counter Beijing’s rapid military build-up. 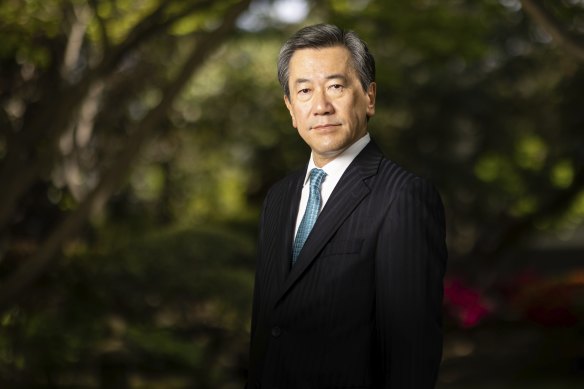 “We live in a tough neighbourhood and we need to be prepared,” Yamagami said in an interview with this masthead last month.

China’s ambassador to Australia, Xiao Qian, this week accused Yamagami of not doing his job properly and using his position to prevent Australia from developing a normal relationship with China.

Xiao also warned Australians not to become too trusting of Japan, describing the country as a greater military threat than China.

Yamagami welcomed China’s recent efforts to restore high-level diplomacy with Australia but urged Beijing to change its behaviour as well as its rhetoric.

“Our government is eager to work towards a stable and constructive relationship with China but in order to do that it takes two to tango,” he said in the interview.

“We’d love to see the day when China becomes a responsible, law-abiding member of the international community.

“We’d like to see China take more responsibility for upholding the rules-based order, both regionally and internationally.”

China has never recognised Taiwan’s government and has set a deadline of 2049 for unification of the mainland with the island – by force if necessary.

Beijing this week renewed threats to attack Taiwan, warning that foreign politicians who interacted with the self-governing island were “playing with fire”. A spokesperson for China’s Taiwan Affairs Office said the country was committed to “safeguarding sovereignty and territorial integrity” and “smashing plots for Taiwan independence”.

Asked whether he would expect Japan and Australia to defend Taiwan if attacked by China, Yamagami indicated he believed they would.

“If blatant aggression takes place like what we have witnessed in Ukraine, there will be a lot of public outcry against the invasion, a lot of sympathy,” he said.

While stressing the future could not be predicted, Yamagami said: “Australia and Japan are fully aware of the importance of this robust democracy in Taiwan – 23 million people, almost the population of Australia, accomplishing peaceful changes of governments for a number of years.”

He said Taiwan was an indispensable part of the global supply chain for vital items such as semiconductors and occupied a strategically crucial position in the East China Sea.

“So all in all, Taiwan will not be written off as a small island entity,” he said.

“As [Japanese] Prime Minister Fumio Kishida has said publicly, ‘Today’s Ukraine could be tomorrow’s north-east Asia’. We do not want to see that.”

“We are not the kind of country that succumbs to this kind of coercion or intimidation.”

Foreign Minister Penny Wong and Defence Minister Richard Marles have both warned against any changes to the status quo in Taiwan.

Kishida last month announced a 26 per cent increase in defence spending, including plans to acquire long-range missiles and develop a new fighter jet with the United Kingdom and Italy.

Yamagami referenced the findings of a recent survey by the United States Studies Centre at the University of Sydney that found 46 per cent of Australians supported sending troops to help defend Taiwan against China if required while 25 per cent were opposed.

A report released this week by a leading Washington think tank, based on elaborate war-gaming exercises, found that in most scenarios Taiwan could fend off a Chinese invasion in 2026 with assistance from the US and Japan.

However, the Centre for Strategic and International Studies report found a war over Taiwan would come at a devastating cost to the US and its allies, resulting in the deaths of tens of thousands of service members and the loss of dozens of ships.

Vicki Gunvalson’s Daughter Briana Culberson Is Pregnant With Baby No. 4