Australian of the Year Grace Tame is launching a campaign to get all governments across Australia to adopt the same definitions of consent, grooming, the age of a child, and sexual intercourse, as the national women’s safety summit calls for recognition that ending violence against women is everybody’s business.

Federal Minister for Women Marise Payne has also warned her state counterparts she would be deeply concerned if some of them threw away the nonpartisan approach to the next national plan for ending violence against women and children. 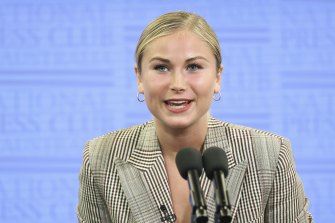 Grace Tame will campaign for all jurisdictions to adopt uniform definitions of consent and grooming.Credit:Alex Ellinghausen

Ms Tame, an advocate for survivors of sexual assault, intends to lobby all attorneys-general for nationally consistent definitions across a range of laws.

She said the “knowledge gaps” enabled perpetrators of crimes like domestic violence and sexual abuse.

“And we wonder why we don’t have a consistent, solid understanding of each of these concepts.”

Ms Tame also took aim at the federal government’s appointment on Sunday of Lorraine Finlay as the new human rights commissioner. She described the choice as “a grave, grave mistake” because of Ms Finlay’s previous public opposition to affirmative consent laws.

“Sadly, a lot of the bold ambitious statements that we heard from the Prime Minister yesterday were undermined by a very direct action [appointing Ms Finlay],” Ms Tame said.

“It is also very telling of a fundamental lack of understanding at the top level of what really is at the foundation of these issues here.”

Nearly 400 delegates to the summit delivered a statement to ministers calling for the next national plan, set to start in mid-2022, to be “backed by long-term bipartisan investment”, be informed by diverse lived experiences especially of victim-survivors, emphasise the critical role of data and research, and link with other national strategies such as the one for mental health. 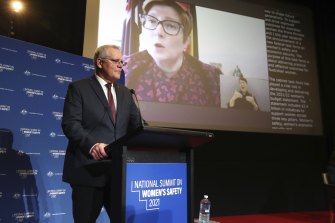 Prime Minister Scott Morrison and Minister for Women Marise Payne on the screen, during the National Summit on Women’s Safety.Credit:Alex Ellinghausen

Victorian Minister for Women and Prevention of Family Violence Gabrielle Williams said the message from the summit was consistent with what victims and advocates had been telling governments for years.

“I have to admit, after the last four days I am somewhat disappointed that despite the advocacy of the women’s movement for decades … the national conversation has been really slow to shift,” she said.

“Platitudes are plentiful, but there have been no commitments from the Commonwealth.

“The sector knows what they need, victim-survivors know what is broken, the Commonwealth needs to listen. We don’t need more conversation, we need action. We need reform. We need resources.”

But Senator Payne urged governments, service providers and communities to continue to work constructively and collaboratively, saying that was what had made the first national plan a success in her view.

“I would be deeply concerned if that nonpartisan approach was to be thrown away by some now for their own reasons,” she said.

“We have moved past so many of the political differences that bedevil governments these days, exacerbated by clickbait efforts on social media, exacerbated by small-minded political point scoring when we are, in fact, together so much stronger and so much more than that.”

She also said if anyone left thinking the only answer to the complex problems discussed was more funding, “they would have taken the wrong outcome from this summit”.

The summit statement also called for Aboriginal and Torres Strait Islander people to lead the responses for their communities.

A separate statement delivered by Indigenous advisory council chair Sandra Creamer went further, calling for a stand-alone plan to end violence against Aboriginal and Torres Strait Islander women and children. Women’s Safety Minister Anne Ruston indicated on Monday she was open to such a move.

Thelma Schwartz, principal legal officer of the Queensland Indigenous Family Violence Legal Service, said governments had to abandon the notion that there would be a one-size-fits-all model.

She echoed the Indigenous leaders who said on Monday that women in their communities were not listened to.

“I refuse to be used or seen as a tick and flick measure. What we want to see is action,” Ms Schwartz said.

The world reacts to the sentencing of Derek Chauvin, the police officer who murdered George Floyd