Tax breaks are on offer to home-grown medical and biotechnology companies to spur investment in innovation and help drive the economic recovery from the COVID-19 pandemic.

Income earned from Australian-developed and registered patents will be taxed at a concessional tax rate of 17 per cent from July next year, almost half the 30 per cent corporate tax rate. 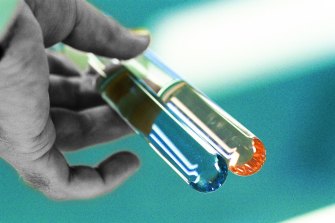 Income from Australian medical and biotech patents will be taxed at 17 per cent. Credit:Erin Jonasson

“Australia has led the world with innovations like Wi-Fi, the bionic ear and a vaccine for cervical cancer. We want to see more innovation commercialised in Australia,” Prime Minister Scott Morrison said.

The so-called “patent box” tax breaks, similar to those offered by more than 20 countries including Britain and France, are expected to cost $100 million a year. The government is considering expanding the scheme to clean energy technologies, which could include large-scale batteries, hydrogen or renewables.

Mr Morrison said Australia’s effective management of COVID-19 had made the country more attractive to skilled migrants, and visas would be streamlined to help attract the best and brightest from around the world once borders opened.

The measure forms part of the government’s six-year, $1 billion Digital Economy Strategy, which includes $128 million funding over the next two years centred on artificial intelligence.

Funding in the budget for energy generation to support the renewable energy boom included $30 million for planning and approval work for billionaire Andrew Forrest’s proposed gas power plant at Port Kembla in NSW. Australian Industrial Power is considering a 600-megawatt gas plant that would be supplied by an adjacent gas import terminal touted by another of Mr Forrest’s companies, Squadron Energy.

However, the budget offered no support for a government-owned gas plant that the federal government has argued will be needed to send dispatchable power into the grid to back up intermittent supply from wind and solar farms, which are grabbing an increasing share of the energy grid.

Energy Minister Angus Taylor has set a target of adding 1000 megawatts of new dispatchable power into the grid by the time NSW’s Liddell coal plant shuts in 2023. Mr Morrison and Mr Taylor said last year the government-owned utility Snowy Hydro could be funded to build a 700-megawatt gas plant in the Hunter Valley, priced at more than $600 million, if private industry did not commit to sufficient works by April 30.

However, the Port Kembla gas plant, along with a 316-megawatt plant Energy Australia committed to last week, could nearly reach the 1000-megawatt target without government intervention.

Rapper Kodak Black tweets thanks to Trump for presidential pardon