Cautious home buyers are holding back at auction as interest rates jump and the cost of living rises, and new figures show just over half the auctions scheduled in August sold.

Despite a modest increase in the auction clearance rate last month as sellers reduced their expectations, fewer than 60 per cent of homes scheduled for auction sold under the hammer. A result below this threshold – the level considered a “balanced market” – points to further price falls ahead. 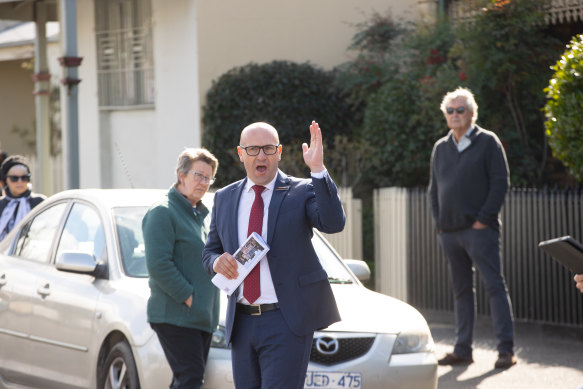 As auctioneers work the crowd, buyers are cautious to raise their hands.Credit:Simon Schluter

Sydney’s auction clearance rate was 53.8 per cent in August, ticking up from 49.2 per cent in July, Domain figures show.

In Melbourne, August’s clearance rate was 56.5 per cent, up from 51.1 per cent the month before.

It comes ahead of Tuesday’s Reserve Bank meeting, which is expected to conclude with another 50 basis point increase to the cash rate, which would take it to 2.35 per cent.

Some economists expect peak-to-trough price falls of between 15 and 20 per cent in the largest cities. Sydney property values have already fallen 7.4 per cent from the peak, on CoreLogic data, and Melbourne is down 4.6 per cent.

PRD chief economist Dr Diaswati Mardiasmo said potential buyers who have a mortgage pre-approved are wary that interest rates might rise before they settle, affecting how much money they can borrow.

“There is a lot of uncertainty in the market,” she said. “Whatever happens to the cash rate will impact their borrowing power. We are seeing more people taking the more cautious, I-will-wait approach.”

Buyers are also mindful of their rising cost of living, upcoming school fees, bigger energy bills and planning for Christmas spending, she said. She also pointed to RBA research showing a drop in the household savings ratio, which might give households with less of a buffer a reason to hold off rather than push ahead and purchase a home.

In the less auction-centric market of Brisbane, the clearance rate edged up to 38.8 per cent but held below 40 per cent for the second month in a row. Adelaide’s property market has been stronger than some of the more expensive cities and its clearance rate reached 63.1 per cent.

The number of auctions held across the combined capitals has fallen for four months in a row, and winter is typically a quiet time for real estate but could indicate owners are less confident to list their home for sale.

In Sydney, AuctionWorks chief auctioneer Jesse Davidson attributed the slight improvement in the clearance rate to a shift in sentiment from vendors as they adjust their expectations and become more willing to make a deal rather than holding out for high prices.

“The massive sale that happened at the neighbour’s house in November last year isn’t happening [now],” he said. “We are getting more realistic owners. In any cycle, up or down, the buyer is ahead of the vendor.” 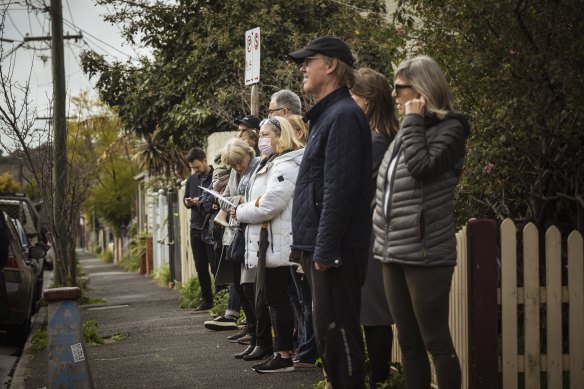 Buyers are waiting on the sidelines to see how the market pans out.Credit:Chris Hopkins

He said people looking to transact had started to become more comfortable with the idea of interest rate rises over the past month, leading to a small increase in the number of bidders per auction, but Tuesday’s statement might change that.

The highest demand is for renovated homes, while units in areas of oversupply attracted less interest, he said.

He expects clearance rates this spring to hold steady or improve a little: “I think it is going to be relatively okay,” he said.

In Melbourne, Brad Teal, director of Brad Teal Woodards, is watching properties pass in and go to post-auction negotiations as buyers hesitate to raise their hands.

“We are seeing that buyers are very cautious,” he said. “They will suggest that they are going to attend and bid, and either don’t attend, or if they do attend, they are reluctant to bid.”

Sellers, on the other hand, are largely in this market to sell, not to test the market, he said.

He said prices are “going OK”, and because there are limited homes for sale that means there is less downward pressure on prices than there might otherwise be.

“If you have got a genuine buyer and a genuine seller, 99 per cent of the time we will get a deal done.”

Most Viewed in Property