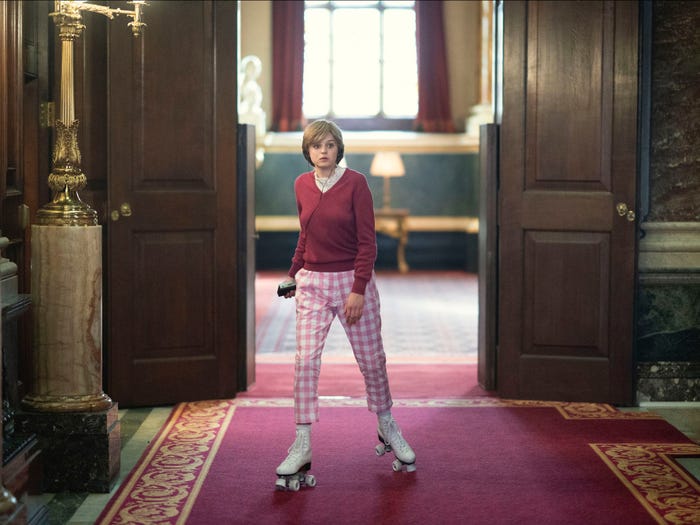 In the third episode of season four of "The Crown," which premiered on Netflix on Sunday, a young Princess Diana — played by actress Emma Corrin — is shown roller skating through Buckingham Palace while listening to the '80s hit "Girls On Film" by Duran Duran on a Walkman.

One of the show's producers, Oona O'Beirn, told British Vogue's Radhika Seth that the image of Princess Diana roller skating through the palace halls is rooted in history — though she may have actually done so in a more private part of the residence.

"It's true!" O'Beirn told Seth of the roller-skating scene. "[Our research showed that] she also rode her bicycle around [inside the palace] the night before she got married, but we didn't manage to get that in. It's hard to do on some of those carpets."

In an interview with Sky News' Gemma Peplow, Corrin said that she thinks the show's roller-skating scene is just one example of young Princess Diana's carefree personality that she continued to embrace throughout her time as a member of the royal family.

"I think she [really] did do that," the actress told Sky News. "Do you know what, it was that kind of thing, it was the roller skating, the sense of fun that she obviously had before she became royal and that she kind of maintained, that I think was quite rare."

Corrin also told Sky News that she "loved discovering" Princess Diana's habits and forms of expression that are portrayed in "The Crown."

"Roller skating through Buckingham Palace is a great example," Corrin said. "Also, the dancing, her dancing and how much that meant to her, and how she used that as a kind of form of expression. I really loved discovering that."

While the image of Corrin's Princess Diana skating down the halls of Buckingham Palace in "The Crown" looks realistic, none of the scenes in the series were filmed in the real royal residence.

In order to re-create the palace's ornate interior, researchers for the show took tours of the royal landmark and built sets focused on mimicking the atmosphere.

Season four of "The Crown" focuses on the British royal family in the 1980s, including the marriage of Princess Diana and Prince Charles (Josh O'Connor), and the tension between the Queen (Olivia Colman) and Prime Minister Margaret Thatcher (Gillian Anderson).