Home » Lifestyle » ‘They need me’: Ben Lee comes home to save Australia from itself

If musician Ben Lee suddenly seems more locally visible than he has in decades, it’s intentional.

After spending the better part of two decades in the US, since his 1993 breakout with Noise Addict earned the attention of the Beastie Boys’ Mike D, the 43-year-old has returned home, rejuvenated from various spells of relative anonymity, ready to reclaim his platform as local pop’s prime eccentric. 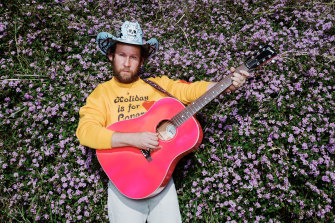 After 20-odd years in the US, Ben Lee is back in Sydney with new single Born for this Bullshit.Credit:James Brickwood

“Look, I’ve been in the spotlight since I was 14. The danger with that is that everything in your life belongs to the public,” he says from his home in Sydney’s Paddington (which he shares with his wife, actor Ione Skye, and their daughter Goldie), dressed in a cowboy hat and a Sonic Youth jumper and seated in front of a hand-painted fantasia of magic mushrooms.

“I think if you live like that, and you don’t have any private experiences, it’s hard to continue to make meaningful art. A lot of my pulling back at various points was a sort of self-protective mechanism, so I could learn about myself and have a life outside of being a pop artist.

Earlier this week, Lee surprised TV viewers (and found himself trending on Twitter) when he was unmasked as The Professor on Ten’s The Masked Singer, an unlikely move for an artist more attuned to DIY indie-dom.

“I have no rules with my career. Increasingly I just go, ‘Does it sound fun?’” he says.

“I texted my friend Margaret Cho, the comedian, who’d done the American [Masked Singer] and asked, ‘What’s it like? Should I do it?’ And she said it’s like a Buddhist exercise in letting go of attachment to your identity and just surrendering. And I was like, that sounds fun, I’m in.”

His new single, Born for This Bullshit, is a manifesto on living with positivity and purpose in tumultuous times.

“Desires, you repress them/ I joined three cults and left them,” he sings, both a self-deprecating nod to the spiritual search that led to his “hippie era”, namely 2005’s Awake is the New Sleep, and an unapologetic celebration of his tendency to dive headfirst into his fancies.

Lee’s playfully impulsive streak has long rubbed some the wrong way, including his infamous claim following the release of 1998’s Breathing Tornadoes that he was “Australia’s greatest songwriter”.

“When I look back on that I go, ‘You know what, I was right!’” Lee says. “That unashamed ambition and that young person’s arrogance – you need that in order to achieve.” 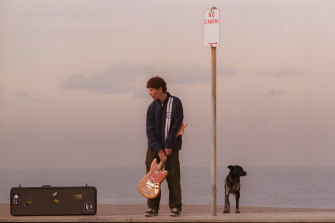 Ben Lee in Bondi, back in 1995.Credit:Peter Rae

He says he now wears such experiences as “badges of honour rather than mistakes”.

“There’s something beautiful in that, where even if you f—ed up and make mistakes and it’s clumsy and it’s public, that if you taste it you at least know what it tastes like, rather than just watching from the sidelines.

“I think that’s what helps you make good art as you get older, that you don’t feel ashamed of your life and that even if there are regrets you still feel proud because you’re like, I lived it, man.”

Those episodes also make him feel like his voice is necessary in Australia, and that he has a responsibility to use his platform for the greater good. A recent convert to TikTok (“I get people following me there going, ‘Wow, I’d never heard of you’, and I’m like ‘Dude, I’ve had a 30-year career!’“), he’s spent the past few months promoting vaccination on Twitter.

“I’m just looking at the facts,” he says of his vocal social media presence. “It’s like, OK, how many artists are there that have earned the legitimacy of their words being taken seriously over years, who also have the interest or the courage to speak up, and on a wide variety of issues? All these side adventures I’ve had have turned me into a semi well-rounded person, and I think we need more of those voices.

“I mean, we all have a unique perspective. It’s almost selfish if we don’t share and just keep that to ourselves.”

The current social mayhem also holds personal resonance, as he noted earlier this year when he tweeted: “I spent 2020 watching my American hippy friends get funnelled into fascism and white nationalism. I’m not sure I have the energy to do it all again in Australia this year.”

“It’s happening!” he says. “The fundamental way you can tell it’s happening is how much the rhetoric of the ‘sovereign citizen’, of the ‘free-thinkers’, which very much is aping what their American colleagues say, is about the faulty premise that Australia, or America, were ever free countries. They were free countries if you were white.“

He says it’s sad to see “hippie types”, many who were once his fans, “getting funnelled into that world”.

“I know a lot of those people,” Lee says. “It’s like a perfect storm between their superstitions around science and vaccination; their distrust of authority, which is not unjust because we all should have a distrust of authority; and then, like, their personal sense of being inconvenienced.

“Meanwhile all the various right-wingers, historically, they swoop in when people are feeling personally inconvenienced. It’s the oldest trick in the book, but we have to keep talking about it.”

Much like Born for This Bullshit, which looks to meet the ongoing bedlam with a jocular swagger, Lee says his new album, set for release in June, is focused on “honouring” the twists and turns of his three-decade career.

“I think our job as we get older is accepting and integrating all those parts of us that we have not understood or demonised before,” he says.

“All of this is in my DNA and this is the moment where I wanna bring it all together and say, this is essentially a self-portrait of a weirdo who is still coming to know himself. But if it’s entertaining to you guys it’s entertaining for me, so let’s keep it going.”

Born for This Bullshit is out now via Warner Music.

Why The Timing Of Prince Harrys Book Is Raising Eyebrows

Nutritionist reveals what to eat and drink to get glowing skin