Home » Lifestyle » This Christmas season, USO offers a smart way to give to our military heroes

During a morning segment on Wednesday’s “Fox & Friends,” two members of the USO staff shared the secrets of creating great care packages for our military troops overseas this Christmas season — a critical endeavor to let them know they’re cared about, valued, and deeply missed at this time of year and always.

They also showed off some of the recent packages they created at Citi Field this week for our troops.

Dr. J.D. Crouch II, CEO and president, and Rebecca Parkes, USO northeast regional president, were both on the program during “Day 3” of the Christmas giving series on “Fox & Friends.” Dr. Crouch pointed out that the USO has been around and helping America’s military since 1941.

During this holiday time, said Dr. Crouch, “We’re sending millions of [packages] out to folks this year all over the world.” He added, “This is just a little taste of home.”

“It’s a small token of appreciation” for our hardworking military, Rebecca Parkes noted. And yes — anything sent now will arrive in time for Christmas, the team assured viewers.

The USO’s Care Package Program offers free gear for our deployed soldiers to help keep them connected to their family, home, and country.

As the USO explains on its website, “The USO Care Package program harkens back to the USO’s early years, when Americans packed boxes full of little ‘tastes of home’ to keep deployed service members connected to the people, places, and things they cherish.”

It says as well, “Those small gestures provide the comfort and care that make a difference for service members stationed far from home.”

Americans tend to be very generous at this time of year — and it is always worth keeping our military and veterans in mind during the holiday season especially.

The USO is doing holiday programming all over the world this Christmas season, Dr. Crouch pointed out.

In addition, the USO is active on behalf of our military for far more than just the Christmas season, of course. 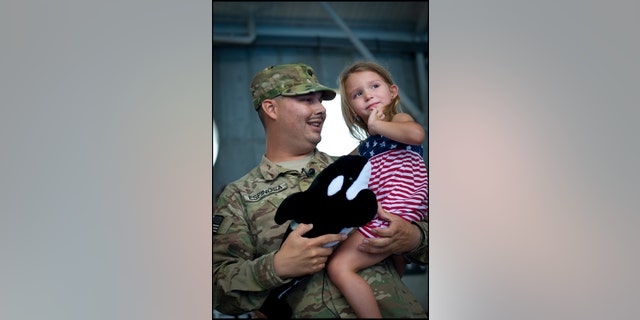 A member of our military is shown here with his daughter enjoying some vacation time earlier in the year. The USO helps Americans reach out to the men and women who are serving our country and are separated from loved ones during the Christmas season.
(SeaWorld Parks and Entertainment)

In the month of May, for example, the USO’s “Feed the Crew” events help support the New York tri-state area’s active-duty military and their ongoing service during Fleet Week New York and Military Appreciation Month.

This year in May, officials recognized our military members for their extraordinary efforts to keep American communities safe during the pandemic, as Fox News reported at the time.

GET THE FOX NEWS APP HERE

To learn more about the USO’s Christmas season effort and to be a part of it, check out the video at the top of this article.

Glastonbury 2019: The ultimate guide to what to pack