Opposition leader Peter Dutton has derided the union movement’s push for new sector-wide enterprise bargaining rules, condemning it as a throwback to the 1970s-era of industrial relations that would subject employers to crippling strike action.

Seizing on the plan pushed by ACTU national secretary Sally McManus ahead of next week’s job summit, Dutton characterised it as an attack on small businesses and put pressure on Prime Minister Anthony Albanese to rule it out.

“I mean, surely [this is] not something that Mr Albanese can entertain, but he owes the unions a lot. They donate millions to the Labor Party,” Dutton said during a visit to an Adelaide construction business on Thursday. 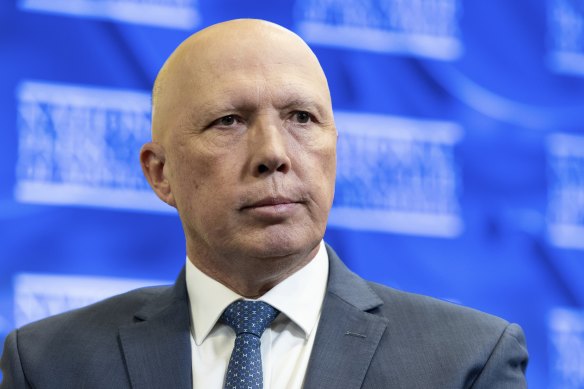 Opposition Leader Peter Dutton has condemned the ACTU’s call for industry-wide wage deals as a throwback to the 1970s.Credit:Alex Ellinghausen

“What Sally McManus is proposing is going to make a bad situation worse. I don’t support a throwback to the 1970s because it would result in crippling strikes that would adversely impact businesses like this and businesses right across the country.”

In a plan pitched at tackling stagnating wages, ACTU wants to overhaul workplace laws to allow unions to negotiate enterprise bargaining agreements across industries such as aged care and childcare with employers as small as a single nursing home or early learning facility.

Employer groups have also emphatically rejected the ACTU’s proposal, claiming it will jeopardise the relationship between employers and employees.

Andrew McKellar, chief executive of the Australian Chamber of Commerce and Industry, dismissed it as a “one size fits all” approach that businesses had rejected in the past.

“Honestly, if we’re talking about industry-wide bargaining replacing enterprise bargaining, then that really does jeopardise the relationship between employers and employees, the ability to bargain in good faith,” McKellar said.

“It’s not something that I think business would be very attracted to at all. And frankly, what it amounts to is a reversal of the sort of reforms that we saw back in the Hawke and Keating era.”

Innes Willox, chief executive of employer association Ai Group, said the ACTU’s plan was “seriously misguided” and the focus should instead be on making it easier for small employers to engage in bargaining that resulted in agreements “relevant to the genuine needs of the business and the employees”.

Unions’ concerns over static wages and employers’ push for an increase in migration to address skills shortages will be debated at next week’s jobs summit in Canberra. McManus said there was “simmering anger and a growing resentment” among working people who would not accept a bigger intake of foreign workers when salaries were falling in real terms.

Currently, only about 14 per cent of workers are covered by enterprise bargaining agreements because the system is mainly used by big employers. The ACTU proposal would dramatically extend the system to smaller employers by allowing them to negotiate together as a single industry.

Prime Minister Anthony Albanese would not be drawn on the merits of the proposal, saying the union movements and employer groups “speak for themselves” and welcomed the debate in the lead up to the summit.

Treasurer Jim Chalmers said the enterprise bargaining system was “broken” because it was not delivering sustainable wages growth but acknowledged the issue was contentious.

“We’re not surprised that there are different views about the best way to improve the enterprise bargaining system and we welcome the contribution of all sides in the lead up to the summit, at the summit itself and afterwards as well,” Chalmers told ABC Radio National.

Robin Givens Admits ‘There’s A Lot Of Sex’ In New Show ‘Ambitions’: ‘Once It Started, It Didn’t Stop’

12 Valentine’s Day Date Ideas, Based On Your Favorite Rom-Com