Home » Lifestyle » Thrifty newlyweds have their dream wedding for only £4,000

Couple throw their dream wedding for 130 guests for just £4,000 by buying the bride’s £220 wedding dress on Facebook Marketplace, making their invitations and borrowing a friend’s marquee

A thrifty couple revealed how they threw their dream wedding for 130 guest for just £1,400 by buying the wedding dress second hand and making their own invitations.

Shop supervisor Alex Lilley, 33, and new husband Dan, 38, a factory maintenance manager, married on August 21 in a church service followed by a back garden reception at their home in Harby, Nottinghamshire.

The couple, who are parents to four-year-old Samuel, are saving for a house renovation and didn’t want to spend too much money on their big day.

Thanks to some clever money-saving tricks, and the generosity of family and friends, Alex and Dan estimate they saved some £15,000 on their wedding. 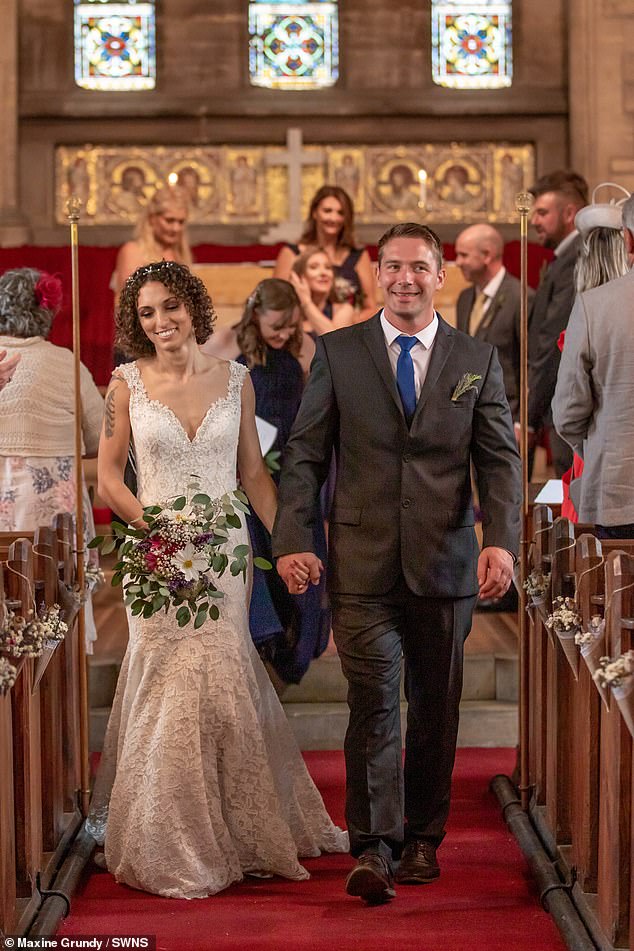 Shop supervisor Alex Lilley, 33, and new husband Dan, 38, a factory maintenance manager, married on August 21 in a church service followed by a back garden reception at their home in Harby, Nottinghamshire. Their wedding day cost a total of £4,000 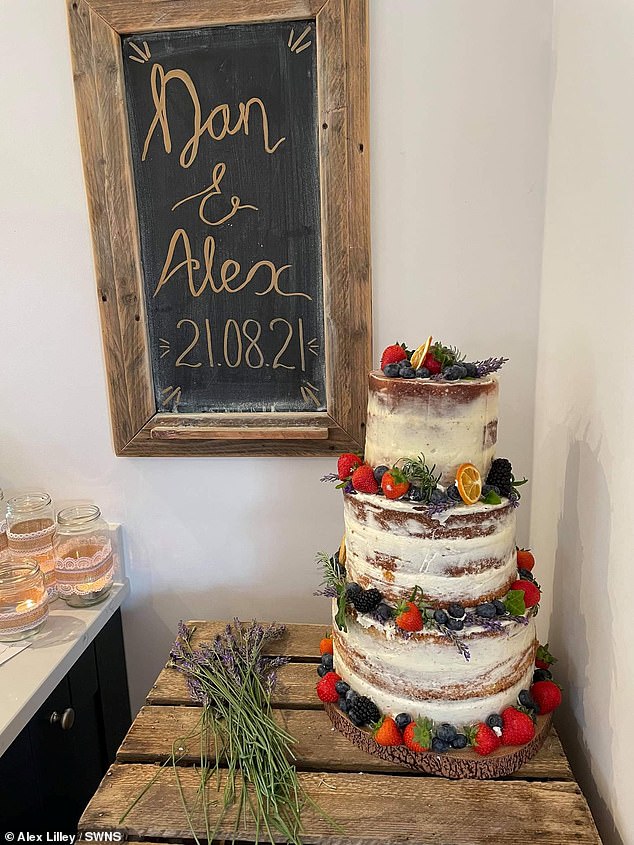 A friendly offered to make the couple’s wedding cake, which meant they got it for free 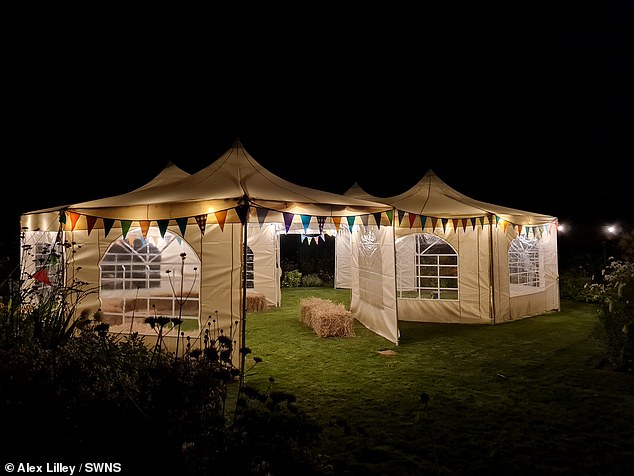 Alex and Dan could count on the generosity of their friends who lent them a huge marquee for free to host all of their 130 guests, pictured

Hair accessories for bride and bridesmaids plus earrings for bride – £46.50

Nails £4 (did them herself)

Of which the following were paid for by friends / family as Gifts: £840

Alex said: ‘People can pay thousands and thousands for their dream wedding but we couldn’t justify it. Doing everything ourselves was ten times the amount of stress but the end result was amazing.

‘We were nervous but the end result better than we ever could have imagined. We managed to keep budgets low and still have the perfect day – I wouldn’t have changed a thing.’

Alex and Dan had shelved their wedding preparation for two years due to the pandemic but earlier this year decided to tie the knot in August.

In order to juggle a pricey home renovation on their three-bed detached bungalow alongside their wedding, they called in favours with loved ones and looked for pre-owned items wherever possible.

‘I searched online and saw a lot of people saying their weddings cost upwards of £20,000, and we weren’t going to spend that,’ Alex continued.

‘But at the same time, we really wanted to get married, so we aimed to do both.’ 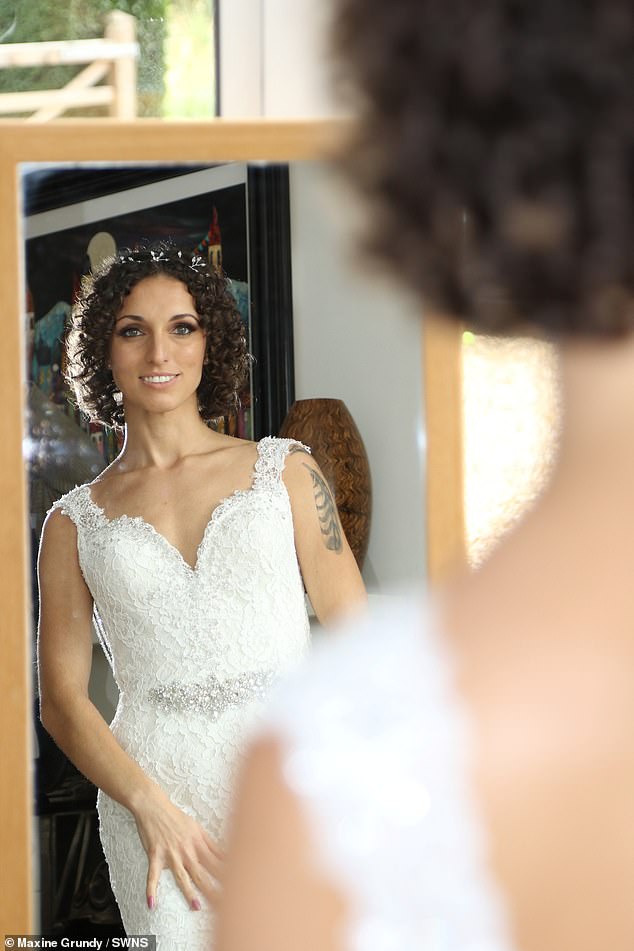 Alex revealed she bought her wedding dress, pictured, which originally cost £,1500, for only £220 on Facebook Marketplace

Alex and Dan’s cat at the nuptials. The couple spent under £400 on decorations and Alex grew her own bouquet, pictured right 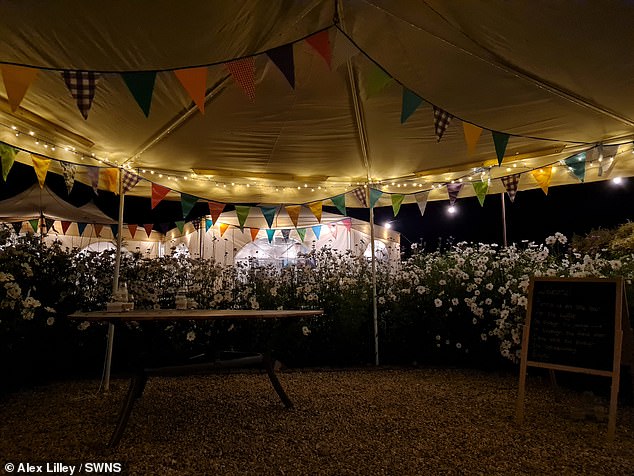 The marquee where the couple had their wedding reception. They spent about £160 on lights 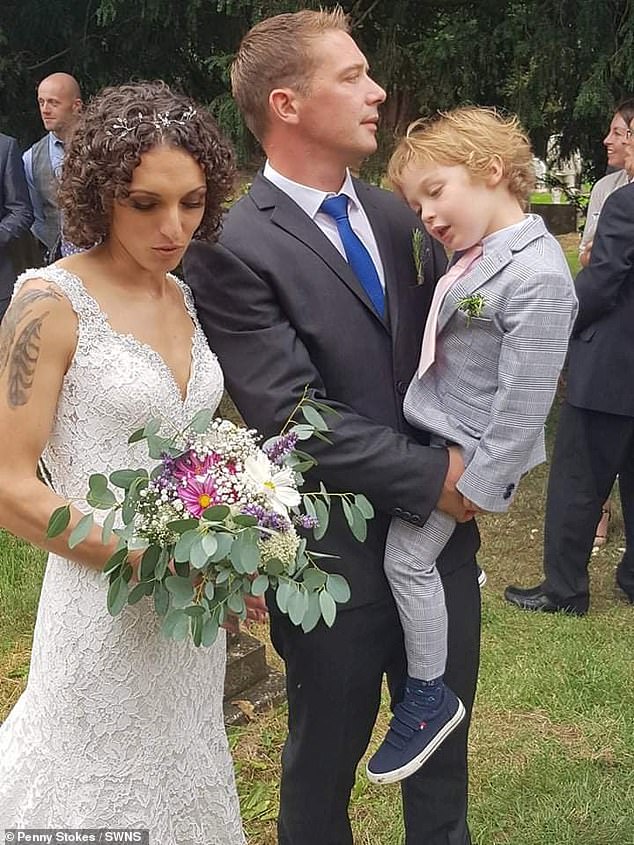 Alex and Dan have a four-year-old son named Samuel, pictured. They paid £50 for a children’s bouncy castle to keep the little ones happy on their big day

The couple had their service at a local church, for a total cost of £626, before everyone took a five minute stroll back to their house, where they hosted the reception in the back garden.

They cut costs on music by taking their own sound system and using a seven-day free trial on YouTube to stream it – and dodged paying for a verger as their friend at the church offered to step in for free.

The outfits worn by the couple, their son, and their bridesmaids were second hand from sites – with Alex getting her own dress, a Kenneth Winston originally worth over £1,800, for a steal of just £220 on Facebook Marketplace.

Alex added: ‘I did have to pay an extra £60 to have the dress altered by a seamstress – but it was still a great deal.’

The enormous marquees erected in their back garden were borrowed from friends for free, with £160 spent on strands of lights to give it a cosy feel.

Their giant three-tier cake was made by a dedicated family member for free, as a wedding gift – while green-fingered Alex grew her bouquet in their own back garden using packets of seeds totalling a just handful of pounds. 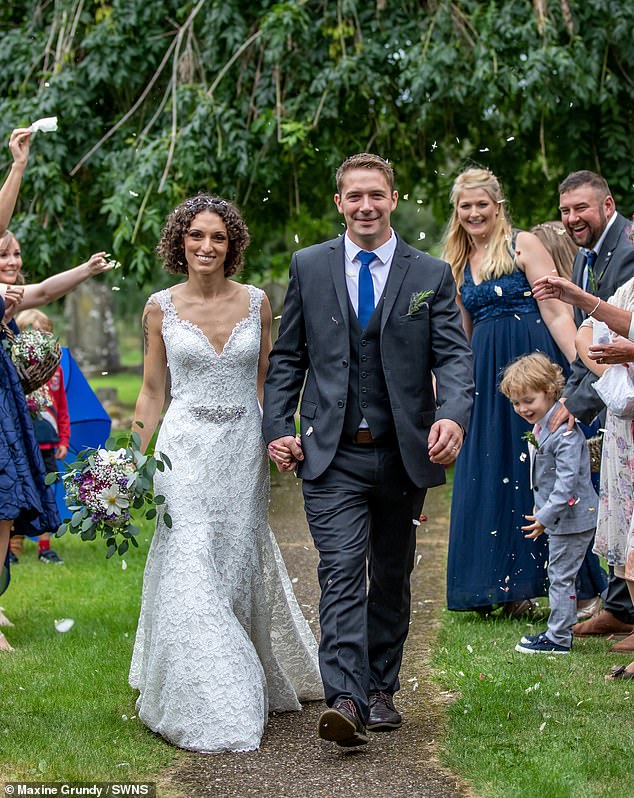 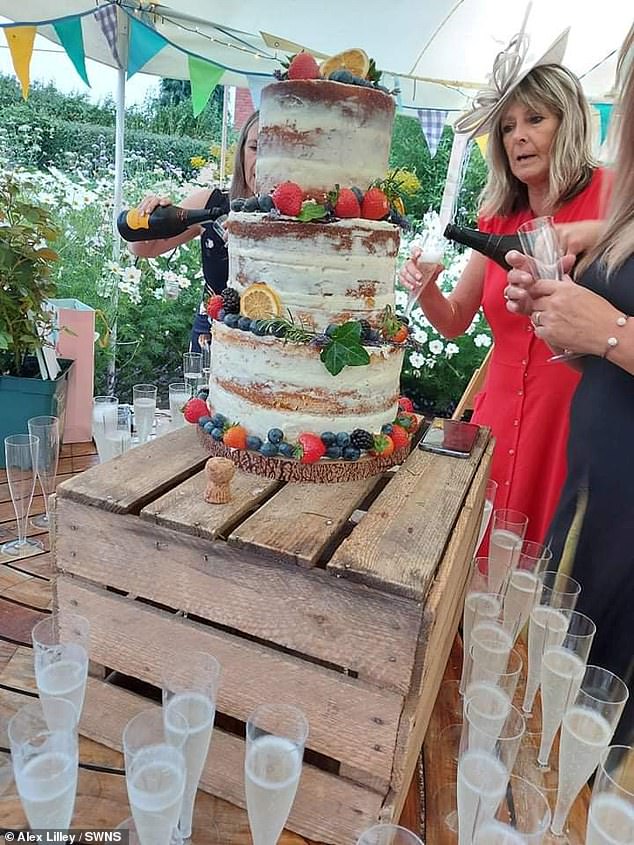 The wedding cake. In total, Dan and Alex said they spent £400 on food and £130 on drinks for their guests 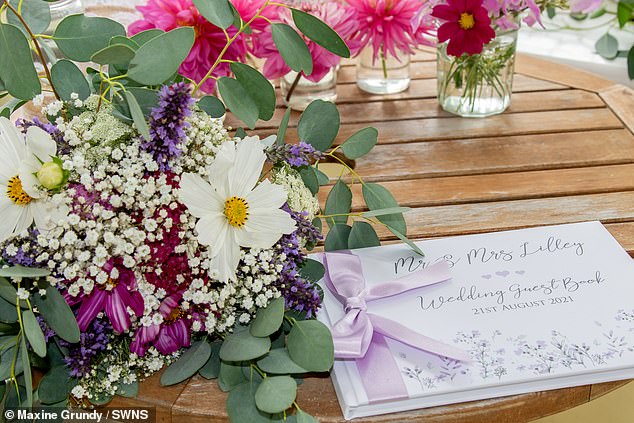 Pictured: Alex’s homegrown bouquet and the couple’s wedding guest book on their big day. They said their thrifty wedding was the best day ever

Her home-grown bouquet was made of an arrangement of cosmos, lavender, eucalyptus, gypsophilia and achillea.

Food on offer was a buffet spread to feed their 130 hungry guests – prepared by their loyal bridesmaids the day before – and featured Mediterranean-style dishes including baked salmon, antipasti kebabs and a bean salad.

Shopping at Aldi, they got the whole lot for £400 – around £3 a head – along with bottles of own-brand Pimms and prosecco totalling £130.

By buying most of their decorations from stores such as The Range and Dunelm, they kitted out the entire ‘do with candles, chalkboards, bunting and hay bales for £165.

Entertainment included hiring a local musician for £150, a photo booth for £275 and a children’s bouncy castle for £50.

The total cost of the wedding came to around £4,020 thanks to Dan and Alex’s thrifty approach – instead of the tens of thousands many spend on their perfect day.

Alex said: ‘It was ten times the stress doing it yourself rather than paying someone else, but the end result was better than we imagined. We’re lucky to have such supportive friends and family.’

The couple got the best of both worlds by celebrating their wedding while still renovating their house – and Alex revealed the thousands of pounds they saved have already gone to good use.

She explained: “Earlier in the year we knocked down a wall in our home and made a new dining room. We also had a new patio fitted and re-turfed the lawn. Just six weeks ahead of the wedding, we had a new driveway installed too.’

The newlywed parents set off on a week-long honeymoon in Cornwall with four-year-old Samuel before returning to married life to continue their renovation work.

Reflecting on their journey, Alex said: ‘It was partly me being stubborn and refusing to pay for something we could do ourselves – but it paid off! It does feel fabulous to have had that level of creativity. We wouldn’t have changed a thing!’

STEPHEN GLOVER: Cressida Dick has lost any claim to competence