Hey mate, before I get into it, I just wanted to say thank you for the drinks.

Don’t worry if you can’t remember buying them for me, because you kind of didn’t. But, if it helps, I was the guy in the purple ski jacket and fisherman beanie, and I took it upon myself to put them on your bar tab.

Just so you know, I got two drinks. One for me and one for the woman you were "talking" to. Now, I say talking because maybe that’s how you saw it. But it’s definitely not how she did. Let me explain. 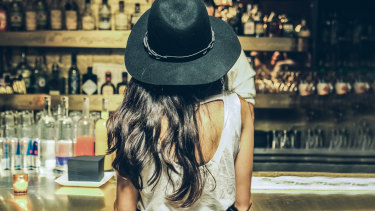 Is a night free of harassment too much to ask?Credit:Shutterstock

Between the blazers and boat shoes crowding the pub's dance floor I noticed you holding onto a young woman. At first it didn’t look like much but on second inspection everything seemed very unnatural.

She was using her hands to create a barrier between you. I think she was trying to be nice about it, but you kept pushing her hands down as you tried to pull her in for a one-way embrace.

It was pretty obvious that she was uncomfortable. And I wanted to ask: Could you not tell? Or did you just not care? I mean, is it ever a good sign when someone is literally dodging your continued attempts to kiss them like some adult version of "here comes the aeroplane"?

Now, I’m not great with small talk, but you really need to work on your game. When I came over and said, “Hey is everything OK?” you simply told me to get lost. How rude. The question wasn’t even for you.

Not content with your response I repeated my question.

This time you were even less receptive, turning to me and threatening that, if I didn’t leave you alone, you’d get me kicked out. I’m assuming you know the owner or something, and throw this threat around to anyone who gets in your way.

Could you not tell? Or did you just not care?

Well, I’ve been kicked out of a few nightclubs over the years, and adding that one to the list did seem like an enticing offer – the flashing lights and lousy deep house mix just weren’t sitting well with me – but, to be honest, I didn’t feel comfortable leaving you alone with this woman.

She was still pushing you off, and you seemed convinced that you were playing a game where the goal was to turn her "no" into a "yes".

I thought of what I could say to break things up. Fighting to be louder than the awful music I yelled, “Hey man … umm, I don’t think she’s interested, you might just want leave her alone.”

Gee, you shot me a sour look after that. It felt like someone had unplugged all the speakers and there was that generic record scratch into abrupt silence. Had things taken another few seconds I’m fairly certain you would’ve thrown one at me, but, thankfully, another voice spoke.

“He’s … he’s OK, he’s with me … we went to school together.” She said, referring to me, accompanying her words with a fake a smile to ease the tension.

With your attention fixed on the inconvenience that was me, this woman had enough time to slip from your grasp.

Standing by my side she put her arm around my shoulder, really playing up that we were long lost friends from school.

So, I guess that was the last you saw of us and you’re probably wondering how the rest of the night went?

Well, as I said, we went to the bar and ordered a drink under your name. I asked her if she was OK.

I hate hearing how normal this was for her. “That sucks. It really sucks. I'm so sorry,” I said.

Surprisingly, she says you two actually know each other, and I bet there’s a fair chance you’ll probably text her this morning saying something like, “Hey what happened last night? You went missing haha." Making it seem like it’s no big deal.

And she will be too nice to tell you what you did, or won’t even bother because she knows you won't listen. She might say nothing at all because the world convinces her that it’s her fault; that she shouldn’t go out to nightclubs if she didn’t want things like that to happen, and that receiving attention like that is a "compliment".

Maybe you’re reading this and don’t even realise you’re the guy it’s about. But, if in your hungover state you recall a boy in a fisherman’s beanie and a purple ski jacket, then: Thanks once again for the drink! I know I should have asked, but I assumed you were okay with it.

Brandon Jack is a writer and former Sydney Swans player.

#EmmysSoWhite: No Actors of Color Win Despite Record Nominee Lineup

STEPHEN GLOVER: Why Boris shouldn't give in to the Covid doomsters