Welcome to the club! Paul Rudd’s hosting appearance during Saturday Night Live’s final episode of the year also earned him entrance to the elite Five-Timers Club.

Most Memorable ‘Saturday Night Live’ Hosts Over the Years

While the Saturday, December 18, episode of the NBC variety series looked different compared to holiday iterations past, 52-year-old Rudd was still able to wear the special Five-Timers jacket like many club members before him.

At the start of the show, Tom Hanks and Tina Fey kicked off a pre-recorded segment, in which they presented the jacket to Rudd, with some virtual help from show OGs Steve Martin and Martin Short. Cast member Kenan Thompson also joined the group on the studio 8H stage.

“Thank you, surviving crew members,” Hanks, 65, said. “Tonight everyone at Saturday Night Live planned to do our big Christmas show and induct a new member into our Five-Timer club but COVID came early this year, so in the interest of safety, we do not have an audience and we sent home our cast [and] most of our crew. But, I came here from California. If you think I was going to fly 3,000 miles and not be on TV, you’ve got another thing coming. … Tonight we planned to welcome Paul Rudd to the club, and we’re not going to let this stop us.” 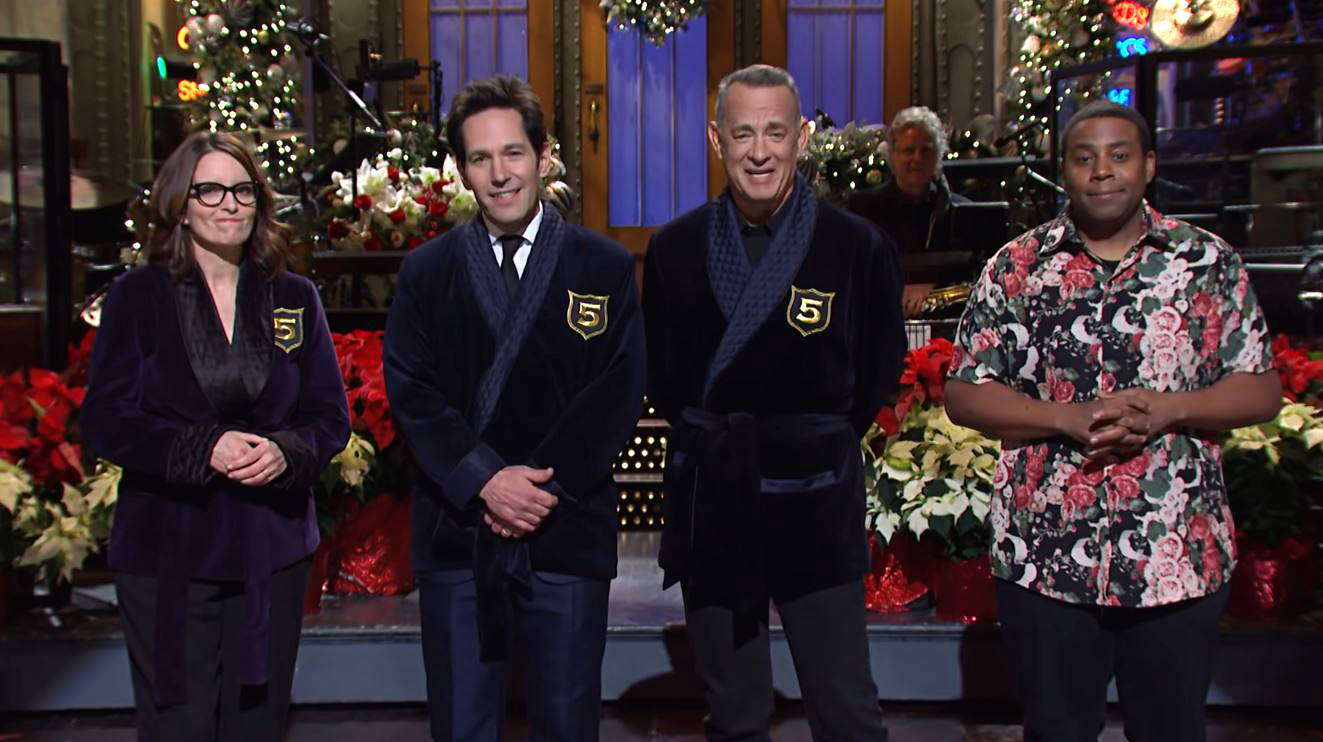 The I Love You, Man actor, for his part, chimed in: “Thanks for coming, I’m extremely disappointed. … Wow, there was a whole show planned and I just can’t believe I’m not going to get my Five-Timer jacket.”

After the Kenan star, 43, presented Rudd with the velvet robe, Hanks enlisted the Only Murders in the Building costars to share their own well wishes.

Hours earlier, the NBC production announced the episode would feature a downsized cast amid rising cases in COVID-19.

“Due to the recent spike in the Omicron variant and out of an abundance of caution, there will be no live audience for tonight’s taping of Saturday Night Live and the show will have limited cast and crew,” a spokesperson for SNL told Us Weekly via a statement earlier on Saturday. “The show continues to follow government safety guidelines in addition to a rigorous testing protocol.”

Shortly after the news broke, Charli XCX, also announced her anticipated musical performance had been canceled.

“Due to the limited crew at tonight’s taping of SNL my musical performances will no longer be able to go ahead. I am devastated and heartbroken,” the “Boom Clap” songstress, 29, wrote via Instagram. “Myself, Caroline, Christine and all of our crews and teams have worked so hard all week alongside the SNL team to bring the most amazing musical performance to live. It can’t happen this time, but I’ll be back! I am verdantly safe and healthy but of course very sad. Please look after yourselves out there and make sure you get vaccinated if you haven’t already. Lots of love, Charli.”

‘Clueless’ Cast: Where Are They Now?

The show later aired recorded sketches that were taped earlier this week, including a futuristic “Evening With Pete” where Pete Davidson poked fun at being a sex symbol and his longtime friendship with Machine Gun Kelly. The variety show also reshared a selection of past iconic sketches before Michael Che and the 30 Rock creator, 51, teamed up for a Weekend Update segment.

The sketch series announced last month that the Ghostbusters: Afterlife star — who previously hosted episodes in 2008, 2010, 2013 and 2019 — would return to the NBC stage for its holiday episode.

“Hi, I’m Paul Rudd and I’m hosting SNL with Charli XCX,” the New Jersey native explained in an episode promo, which premiered on Thursday, December 16, before cast member Ego Nwodim congratulated him on the honor. Rudd then jokingly corrected her, “No, I was just arrested for the fifth time this week.”

For more, watch the clip above!