Home » Travellers pay respects to their parents by burning their possessions

Siblings pay their respects to their late parents by burning their belongings on Here Come The Gypsies and insist they’d set fire to a £20,000 trailer because travellers don’t want anyone else to have their posessions

A Romni gypsy and her brother have explained why travellers burn the possessions of the dead in a traditional ritual on Here Come The Gypsies.

Marie Rawlings, and her brother Leon, from Dorset, wanted to honour their late parents’ memory on tonight’s episode of the Channel 5 show, airing at 8pm.

The family explained that burning the possessions of travellers after they pass on is a way of ensuring they take their belongings with them into the afterlife, as well as dispelling evil spirits.

And Marie said that they would have no hesitation in burning a £20,000 trailer because gypsies do not believe in giving away second hand belongings for someone else to use.

The two siblings needed to find a open outdoor space to burn the items in peace, but they were wary of outsiders disrupting the ceremony. 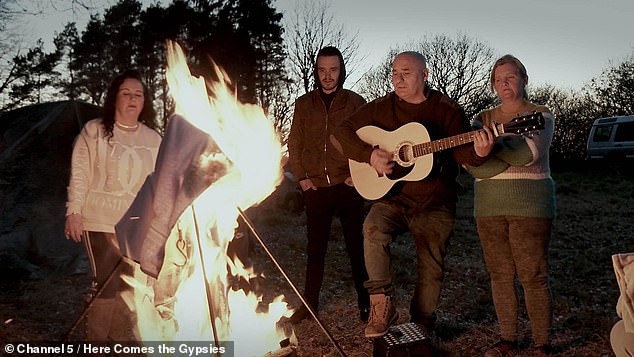 Marie Rawlings, and her brother Leon, from Dorset, wanted to honour their late parents’ memory with a gypsy ritual of burning their belongings, pictured, on tonight’s Here Come the Gypsies on Channel 5, at 8pm

In the show, Marie is seen meeting with Leon and his family to head into the countryside with a horse carriage.

Marie and Leon were raised on the road by their nomadic traveller parents.

The siblings and their children travelled to a spot that was well known to them as children, and one of their parents favourite stops.

‘This brings back a lot of memories, I can see mum’s carriage and I can see mum and dad sat here around the fire as plain as day, they loved it here,’ Marie said. 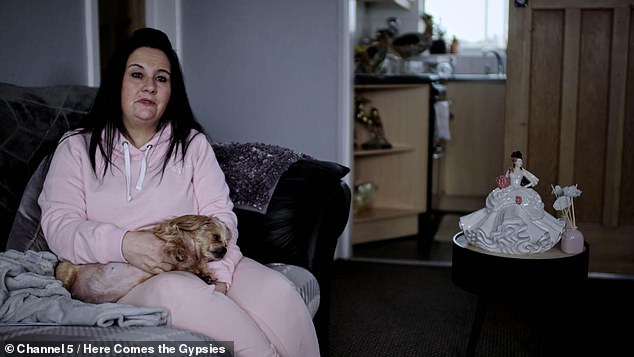 Marie, pictured at home, said she was proud of having been brought up on the road, and would never be ashamed of being a traveller

Her parents had recently passed away, and Marie and Leon wanted to honour their memory with a traveller tradition.

‘Burning is a gypsy culture thing,’ Marie said. ‘They wouldn’t like me to box it up and take it to a second hand shop because gyspsies wouldn’t like somebody else wearing my mum and dad’s stuff.’

The tradition, which goes back generation, is seen as a sign of respect to the deceased.

Some people the burning ritual will also ward off any evil spirits that might try to contaminate the deceased soul.

Leon’s sons and Marie’s daughter joined their parents for the special moment.

‘It’s out of respect and the love we had for my nan and granddad,’ Leon Junior explained.

But the family feared outsiders could ruin their reunion and spoil the burning ceremony.

‘I’m pretty sure tonight somebody will go past and shout,’ Leon said. ‘Some people drive their cars at you, some people do, you have to be very careful.

‘You get the local people going round to their mates going, “There are gypsies down the road, keep an eye on your stuff”,’ Leon Jr said.

‘And there is some that do it, don’t get me wrong, but not everybody does it,’ Marie added.

‘This trip could be ruined by other people, they could be shouting abuse.’

But as night fell, the clan went on with their ritual and started slowly burning Marie and Leon’s parents’ belonging in the fire.

The siblings grew emotional, with Leon playing softly on the guitar and Marie looking at the flames. 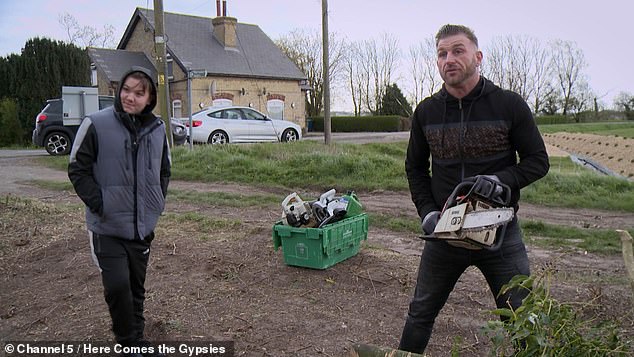 ‘She’ll be looking down on us, burning these pieces and pieces,’ she said of her mother.

‘They’ll always be part of my life ’til the day I die. They’ve done a hell of a lot for the gypsy community’ she added.

‘They were just amazing, they’d be watching down on us.’It’s nice to all be together outside again doing old traditional stuff again,’ one of Leon’s son said.

‘We’ll never forget them,’ he added.

‘I can feel them, I feel they’ll be watching us, looking down on us. Make them feel so proud. I’m carrying on the old lifestyle, doing things that they done, it means a lot to me and my sister,’ Leon said.

However, the next day, the family were left shaken after strangers approached their campsite overnight.

They noticed doors of their horse box and car had been left ajar.

Leon’s son revealed they saw a man standing by the car, who ran away after their spotted him.

‘We was minding our own business, we were paying respects to my mum and dad, you now, and you get all this abuse, it’s not right,’ Leon said.

However, the incident didn’t take away from the ritual’s significance for the Rawlings family. 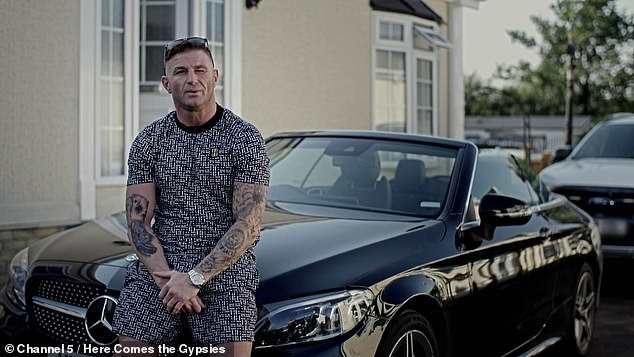 ‘I know they’re with Jesus and I know they’ll be thinking, “Look what my children have done for me”,’ Marie added.

‘They’d love us being out here, they’d want us to keep going.’

Before returning home, Marie left on one more reflection, saying:  ‘I’d never change what I am, I don’t think anyone should be ashamed of what you are.

‘You’re born a gypsy. and you carry on being a gypsy,’ she said.

Also featured in the episode, MMA fighter Tony ‘The Rhino’ Giles taught his son, Little Tony, 13, to learn the skills to traveller men are expectived to have and make him more resilient.

Tony, who won competition titles in boxing and also organised traditional bare knuckle fights for his travelling community, said he wanted his son to remain safe from night and gun crime.

In the programme, Tony taught Little Tony how to use a chainsaw, how to fix a roof and how to drive.

Here Come the Gypsies airs tonight on Channel 5 at 8pm.