A new true crime series is exploring how a journalist struck up a chilling relationship with the most prolific serial killer in American history — Samuel Little — and got him to confess to dozens of murders for the first time.

Premiering on Starz on April 18, Confronting a Serial Killer details author Jillian Lauren’s race to identify Little’s unknown victims using the drawings he made in prison. He claimed to have killed 93 people, mostly women, over the span of four decades, and the FBI believes all of his confessions are credible.

‘Little was like, “You want to know about the first one?” It took me a minute to realize he’s confessing,’ Lauren recalled in the haunting trailer for the five-episode docuseries from Emmy-winning filmmaker Joe Berlinger. 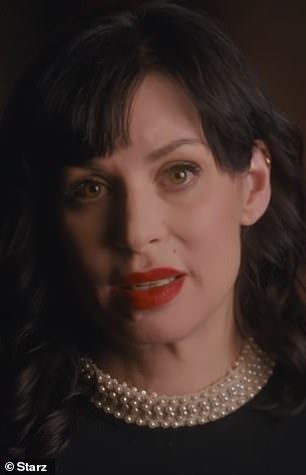 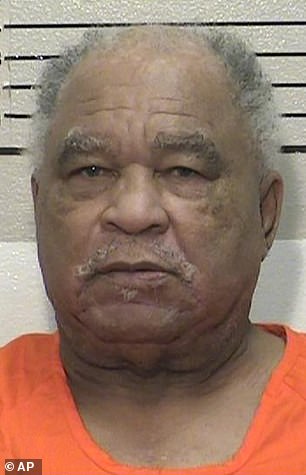 Lauren first learned about Little in 2017 when she asked LAPD homicide detective Mitzi Roberts about the case she was most proud of. In 2014, the serial killer was convicted of the murders of three women in California in the late 1980s.

‘Roberts told me she suspected him of many more killings across the country, and after she got him, she figured other police departments would start connecting him to their own unsolved murders. To her frustration, that never happened,’ Lauren explained in an essay published by The Cut in 2018.

‘She thought maybe it was because Little preyed on the “less dead,” people who live on the margins of society and whose murders have historically tended to be not as thoroughly investigated as those of their wealthier, whiter, and perhaps more sober counterparts.’ 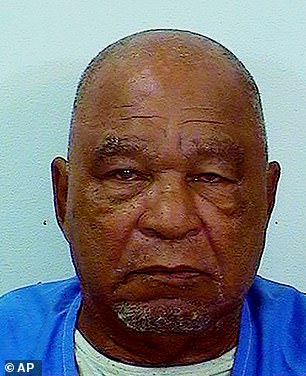 Nightmare: Little claimed to have killed 93 people, mostly women, over the span of four decades, and the FBI believes all of his confessions are credible

Confronting a Serial Killer highlights the glaring issues in the criminal justice system, including the racial and gender bias against marginalized victims that allowed Little’s crimes to go unchecked for so long.

Several female investigators, survivors, and victims’ family members were interviewed for the series, and in the trailer, they share a similar sentiment about the failures of the criminal justice system.

‘It’s mind-boggling,’ one woman told the cameras. ‘He would have never gained that title [of America’s most prolific serial killer] had the system dealt with him correctly.’

One victim’s family member said that she felt the police didn’t deem her relative’s death ‘important enough to investigate.’

‘They failed me,’ survivor Laurie Barros said of law enforcement. ‘They failed every woman after me that was killed.’

Barros, then 22, was working as a prostitute in San Diego, California, when Little attacked her and left her for dead in a pile of trash in October 1984.

When Lauren first made contact with Little, he was in his late 70s and known to be in poor health.

‘I started reaching out to him to bring justice to these cold cases and restore the names of these victims,’ she said in the trailer.

Lauren first started writing letters to him while waiting for clearance to visit him at the California State Prison, Los Angeles County, and in their exchanges, he maintained his innocence.

On her first visit to the prison, she spent hours building a rapport with him. The next day, after about six hours total of talking, he told Lauren about his first murder.

The docuseries features audio recordings of Lauren’s conversations with Little, and when she asked him how many women he had killed, he replied, ‘I was killing for pleasure,’ and then started laughing.

‘If you weren’t locked up, I’d probably be dead by now,’ she said at one point. 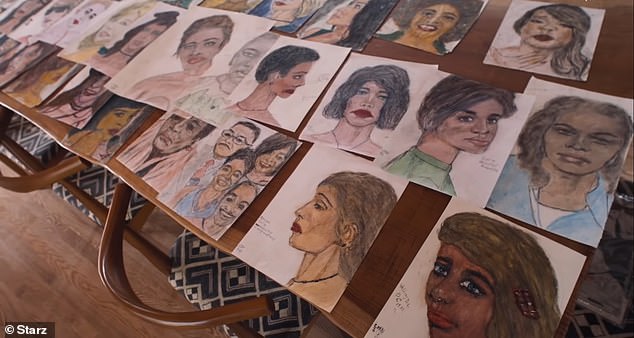 Mystery: Little drew pictures of the women he killed and gave them Lauren as she raced to identify his unknown victims 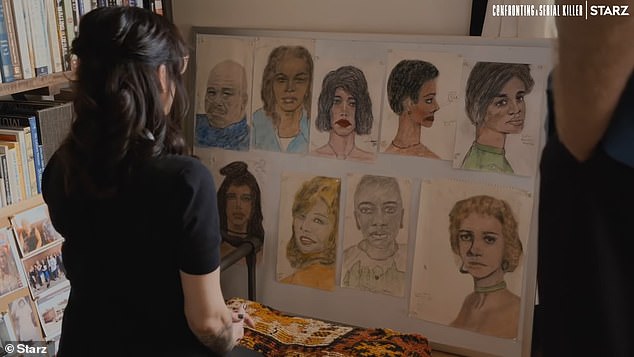 Mission: ‘He did these drawings for me. I’m determined to help identify them. That’s my job,’ she said in the trailer for the five-episode docuseries

Little drew his murder victims, and in one scene, Lauren can be seen studying the images on her wall.

‘He did these drawings for me. I’m determined to help identify them. That’s my job,’ she said. ‘I have access to him, so my deal with the devil is you will not die alone if you tell me the truth.’

Little’s first known victim was Mary Brosley, an alcoholic mother of two, who had run off to Florida, leaving her family in Massachusetts.

The two loners found each other in a Miami bar on New  Year’s Eve as they prepared to drink at the start of 1971. But before the clocks chimed midnight, Brosley, 33, was dead. Little had driven her to a secluded spot along Route 27 and strangled her.

‘I had desires. Strong desires to choke her,’ he later told cops. ‘I just went out of control I guess.’

Little had a throat fetish — formed, he claimed, because he became sexually aroused watching his fifth-grade teacher touch her neck. He was already dreaming of killing a little freckled girl in his class. 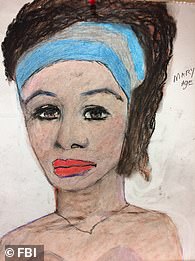 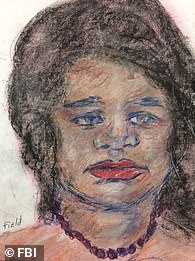 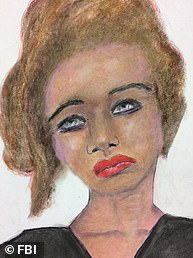 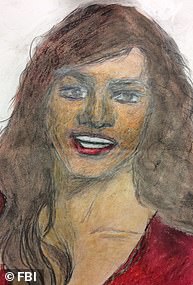 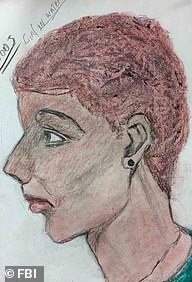 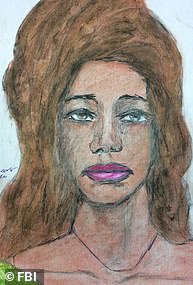 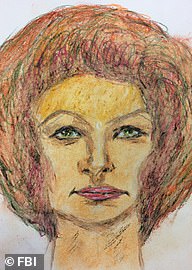 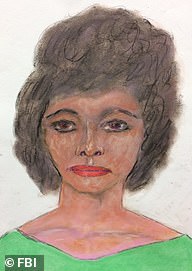 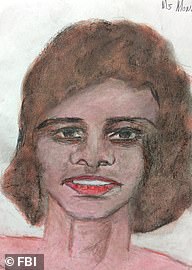 He claimed he had to avoid looking at the necks of friends or family as he never wanted to hurt those he loved.

But strangers, especially those on the margins of society such as prostitutes, the mentally ill, alcoholics, and drug addicts were another matter. He drew pictures of those he killed. Nearly all of his drawings focus as much on the neck as the face.

Little traveled the country, killing in at least 19 states. His victims were usually young women — nearly three-quarters of them African-American.

The former boxer, who became known as ‘the Choke and Stroke Killer,’ strangled most after he had knocked them out with a single punch.

His modus operandi helped protect him for so long. Many of the deaths were initially ruled as accidents or overdoses as there was no sign of a struggle.

In many cases, local law enforcement had only carried out a cursory investigation. Police admit that if he hadn’t confessed, most of the murders would never have been solved — or even seriously investigated.

Brosley’s badly decomposed body wasn’t discovered for three weeks. Tests showed she had drunk so much she probably died of alcohol poisoning. The death was labeled suspicious as someone had gone to the trouble of burying her body, but not a homicide. 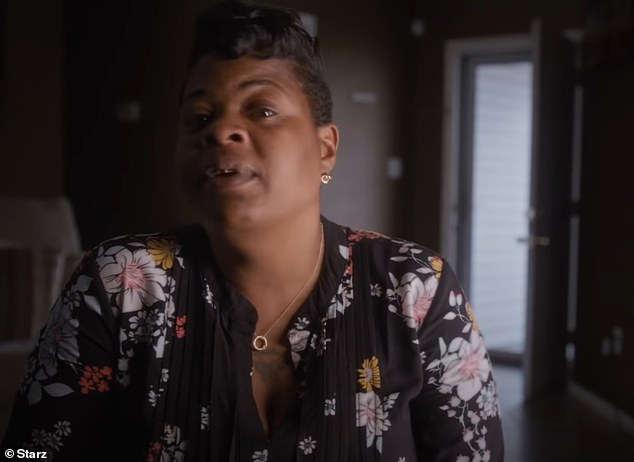 Failure: One victim’s family member said in her interview for the series that she felt the police didn’t deem her relative’s death ‘important enough to investigate’ 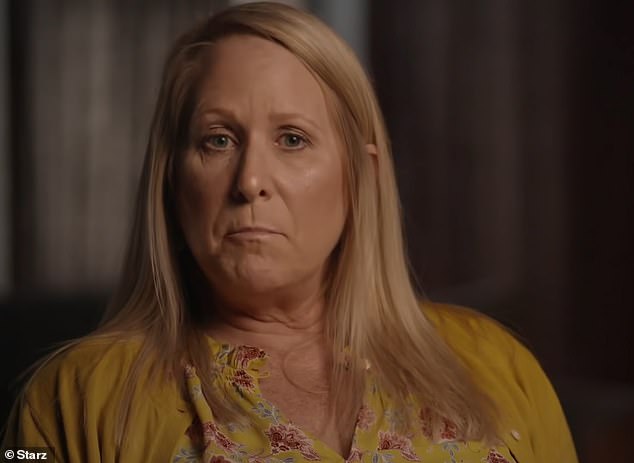 ‘They failed me,’ survivor Laurie Barros said of law enforcement. ‘They failed every woman after me that was killed

The Washington Post discovered an interview with authorities from Ohio in which Little had referred to his victims as ‘succulent fruits he could enjoy without penalty.’

‘I’d go back to the same city sometimes and pluck me another grape,’ he said. ‘How many grapes do you all got on the vine here?’ He bragged about avoiding people who would be immediately missed.

‘I’m not going to go over there into the white neighborhood and pick out a little teenage girl,’ he said.

While Little was successful at hiding his murders, he was in and out of prison all his life for lesser crimes. It all started when he stole a bicycle as a 13-year-old and was sent to a reform school in Ohio. Two years later, it was burglary in Omaha, Nebraska, then he was sent off to juvenile detention for a store break-in in Lorain, Ohio, according to the Post.

He took up drawing while in prison and painted a mural on the Dade County jail wall in Florida in 1976 that led to him being interviewed by a reporter from the Miami News. ‘I’m looking forward to the day I can get out and open a studio on the beach,’ he said. ‘The next time I’m out, it’s do or die.’

He had already been jailed more than 30 times by that stage and it was five years after he had killed Mary Brosley. According to Little’s later confessions, at least 10 other women had already died at his hands. 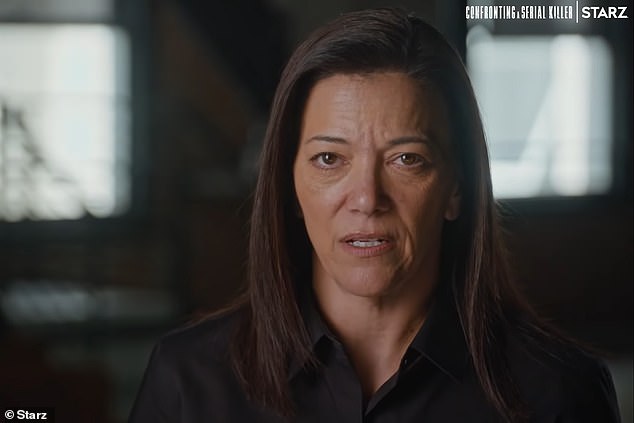 ‘It’s mind-boggling’: One woman insisted that Little would have never become America’s most prolific serial killer if ‘the system dealt with him correctly’ 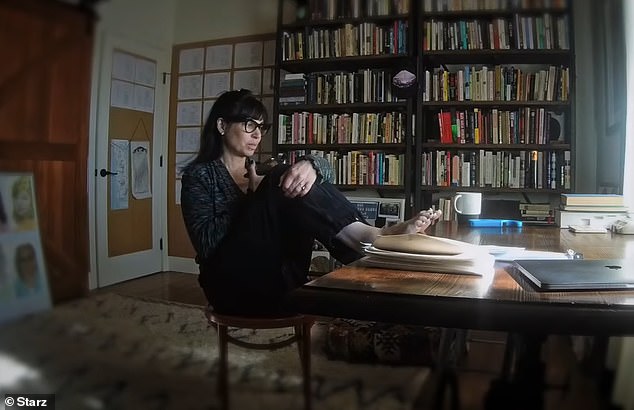 Bargain: Lauren told Little he would not die alone if he told the truth, but he did

In the years after his release, the killing intensity rose alarmingly in places such as Granite City Iowa; Houston, Texas; Macon, Georgia; Plant City, Florida; and Cleveland Ohio. In cities large and small throughout the country, Little killed and authorities barely noticed.

In 1982 he was arrested in Pascagouola, Mississippi, and finally charged with murder. The victim was 22-year-old Melinda LaPree, but a grand jury declined to indict him.

However, while in custody he was transferred to Florida for the murder of Patricia Mount, 26. Witnesses identified him as the man Mount had spent time with the night before she disappeared. But still, he was acquitted.

He moved to San Diego and was arrested for attempting to strangle Barros. A month later he was found in a car with an unconscious woman who had also been beaten and strangled in the same spot where he had tried to kill Barros. He served two-and-a-half years in prison.

Upon his release, he moved to Los Angeles and committed at least 10 more murders. The final killing, he said, was in 2005.

It wasn’t until 2012, seven years after the murder spree had stopped, that he was arrested at a homeless shelter in Louisville, Kentucky, and extradited to Los Angeles where he was charged with three murders. 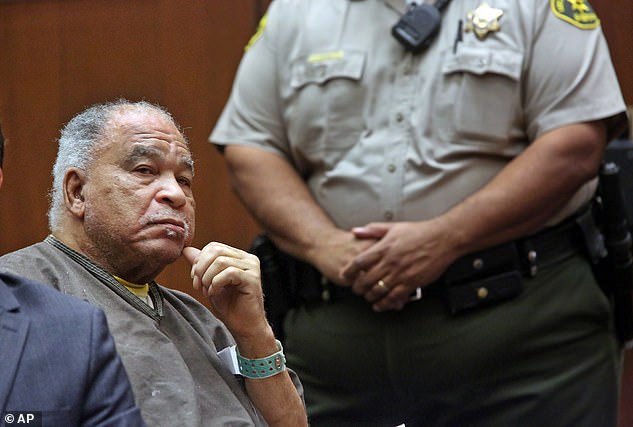 Lonely death: Little (pictured during a court hearing in LA in 2014) died in a California hospital in December 2020 at the age of 80 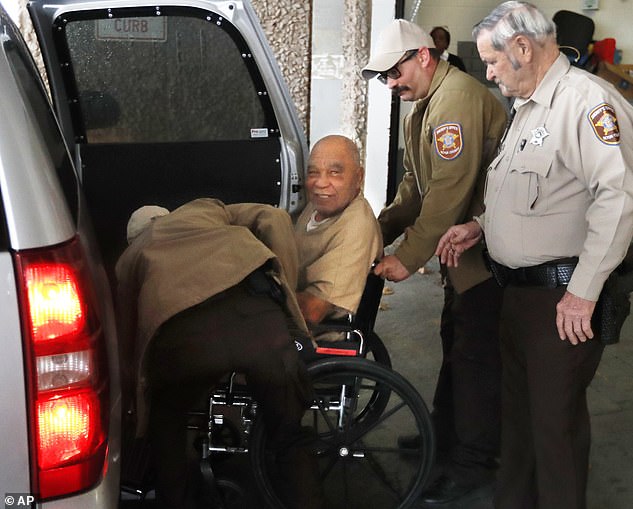 Frail: Once a strong, strapping boxer who used his powerful hands to strangle his victims, Little had been using a wheelchair to get around before his death 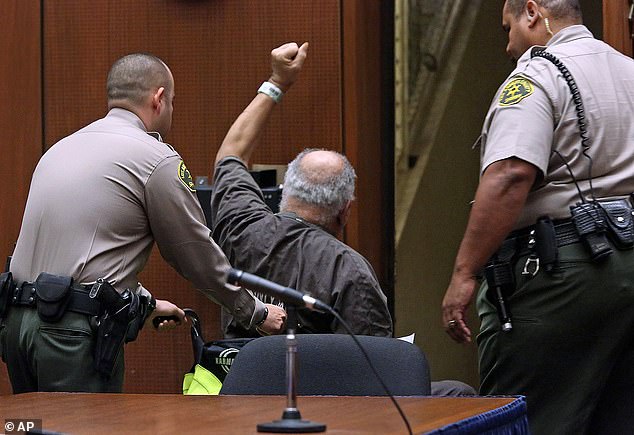 Justice: Little was seen raising his fist as he was led out of the courtroom in 2014after being sentenced to three consecutive terms of life in prison without parole for murdering three women in the late 1980s

He was sentenced to life without the possibility of parole in 2014. He continued to protest his innocence as DNA evidence began to link him to three dozen murders across the country.

Three months after he started talking to Lauren, he made the sudden decision to officially confess all to Texas Ranger James Holland in 2018. Holland was questioning him about a murder that it turned out he did not commit and he suddenly opened up — in return for a move from Lancaster.

In some 700 hours of interviews, he provided details of scores of killings that only the killer would know. And then he gave Holland the drawings of the women he had killed, sometimes with their names and details of where he had dumped their bodies.

Authorities say they have confirmed 60 of those murders and have no reason to doubt the other confessions.

The FBI played along as he spilled the beans about how he killed and killed and killed again. But the transfer never came, and less than three years after he started to open up about his run of murders, he was still an inmate at the prison, 70 miles north of downtown LA.

Little, who had serious long-running health problems, including diabetes and heart trouble, died in December 2020 — one day before the 50th anniversary of Brosley’s murder.

Unable to walk and in constant pain, Little was alone apart from the guards who constantly watched over him when he passed away in a California hospital at age 80.