LONDON (Reuters) – A brown quartzite head of young king Tutankhamen was due to be auctioned in London with an estimate of more than $5 million on Thursday, in the face of Egyptian demands for its return. 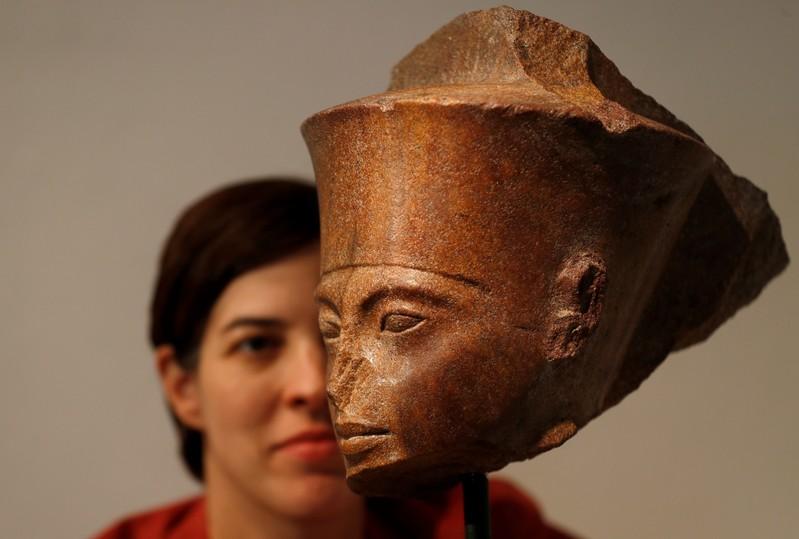 The more than 3,000-year-old sculpture, on display at Christie’s London auction house, shows the boy king taking the form of the ancient Egyptian god Amen.

Mostafa Waziri, secretary general of Egypt’s Supreme Council of Antiquities, told Reuters he was disappointed the sale was going ahead, despite requests for information and protests from government officials and Egypt’s embassy in London.

“I believe that it was taken out of Egypt illegally … They have not presented any documents to prove otherwise,” Waziri said.

Staff at Christie’s said they had taken the necessary steps to prove its provenance and the sale was legitimate.

“It’s a very well known piece … and it has never been the subject of a claim,” Laetitia Delaloye, head of the antiquities department at Christie’s, told Reuters. “We would never offer a piece where there is any concern about the provenance.”

The 28.5 centimeters (11.22 inches) high piece was in “extraordinary condition”, she said, with just the ears and nose damaged. It is seen selling for more than £4 million, plus commission, with a collector the most likely buyer.

The head is being sold from the private Resandro collection of Egyptian art.

Christie’s says the head was acquired from Munich-based dealer Heinz Herzer in 1985. Before that, Austrian dealer Joseph Messina bought in 1973-1974. It says Prinz Wilhelm Von Thurn und Taxis “reputedly” had it in his collection by the 1960s.

“Historical objects by their nature, it’s impossible to track them back over the millennia of their existence, so what we endeavor to do is to research their modern history,” Delaloye said.

Christie’s had been in touch with Egyptian authorities in Cairo and the London embassy, she added.

Egypt has long demanded the return of artefacts taken by archaeologists and imperial adventurers, including the Rosetta Stone kept in the British Museum – campaigns paralleled by Greece’s demands for the Parthenon sculptures, Nigeria’s for the Benin Bronzes and Ethiopia for the Magdala treasures.