More advertisements aimed at convincing older Australians to get their coronavirus vaccines will be rolled out in coming weeks but Prime Minister Scott Morrison says it’s no use targeting younger people yet since they aren’t eligible for the shots.

The government is under pressure for its communication campaign around the vaccine rollout but it insists the ads already out there are working.

Nearly 92,900 people were vaccinated over the past 24 hours, making it the second-highest daily total. More than 3.37 million doses have been delivered so far.

Experts have warned Australia risks not reaching herd immunity without a comprehensive vaccination campaign including communications. About a third of Australians are unsure whether to get the vaccine, with older people and women more likely to shy away from it, The Sydney Morning Herald and The Age’s Resolve Political Monitor has found.

Mr Morrison said there would be more communications going to the elderly population within weeks and people should expect to see other campaigns ramp up later in the year as healthy, younger people became eligible to be vaccinated. 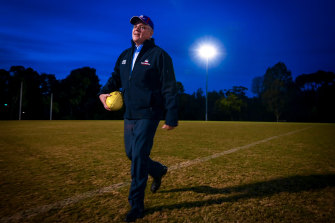 “There’s no point talking to people of 30 years old at the moment because they can’t go and get a vaccine,” he told 3AW radio.

“We’re talking to those who are eligible for a vaccine at the moment, which is over 50s and particularly those who are over 70 and in residential aged care facilities.”

He said about 65 per cent of the population was very happy to be vaccinated.

Opposition health spokesman Mark Butler pointed to overseas campaigns that reinforced the safety and effectiveness of getting vaccinated but also highlighted the wider benefits.

“All around the world we’re seeing strong community information campaigns reinforcing the importance of getting vaccinated, to protect yourself but also to protect the rest of the community,” Mr Butler said.

“We have a really good tradition here in Australia around strong public health messages going back to the AIDS campaign and other public health campaigns around smoking, around the dangerous use of alcohol and other drugs… Let’s use it to bolster support for the vaccine rollout.”

On health advice, the government has recommended people aged under 50 get the Pfizer or Moderna vaccines due to a rare but serious risk of blood clotting among younger people from the AstraZeneca shots. Millions of doses of the Pfizer and Moderna vaccines are due to arrive in the country after September.

The government set aside $23.9 million in December’s mid-year budget update and another $6.7 million in last week’s budget to advertise the vaccination program. It is also spending $9 million out of the broader COVID-19 communication allocation.

Ads are running on television and radio, online, in newspapers and on billboards and social media.

A government spokesman said research showed people wanted simple facts about whether they were eligible, where to get them and how to book.

The most recent advertisement features former deputy chief medical officer Nick Coatsworth saying people aged over 50 are now eligible and that vaccination is “voluntary, free and the best way to protect you and your community”.

Got Dry Or Damaged Hair? This Is The Exact Type Of Shampoo You Should Be Using

Ronnie Ortiz & Jen Hartley: The Status Of Their Relationship & Parenting Ariana, 2, As He Dates Saffire Matos