The troubled Dungowan Dam project, cited by the Productivity Commission as an exemplar of “flawed decision making”, may be even less viable than thought with an internal NSW government review estimating costs may double again.

Originally agreed by the NSW and federal governments as a $150 million dam on the Peel River to meet rising water demand in the northern town of Tamworth, the project’s cost have tripled to $484 million, the commission said in its draft National Water Reform report released last week. 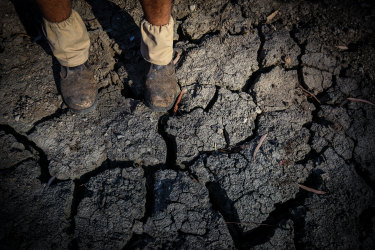 A farmer stands on the dry bed of the Namoi River in October 2019. Farmers may have water allocations cut if a planned dam on the Peel River goes ahead.Credit:Getty Images

The commission described the dam’s benefit-cost ratio as “marginal” and that “any further increases in construction cost would likely result in the project becoming unviable”.

But a capital works document obtained by the NSW Greens reveals the Planning Department’s water division predicts the cost of the dam could balloon further, reaching as much as $870 million.

“Funding only for $480 million,” the document states. “Need to identify additional funding.“

First promised by local Nationals MP Barnaby Joyce ahead of the 2016 federal election, the dam is the latest NSW-federal project to report an embarrassing cost blowout.

As this masthead reported earlier this year, the plan to build a new, higher wall for the Wyangala Dam on the Lachlan River may now soar to as much as $2.1 billion, or triple the $650 million initially touted, NSW government papers show.

Cate Faehrmann, the NSW Greens spokeswoman for water and chair of the parliamentary inquiry into new dams, said Tamworth residents were already worried they would face higher rates for water to pay for the dam and now faced “many hundreds of dollars more each year”.

“Dungowan Dam has never been about securing Tamworth’s water supply and will deliver very little water security for Tamworth residents,” Ms Faehrmann said. “It was already an obscene waste of money at $500 million, particularly given the opportunity cost of not investing in more sustainable solutions like large-scale water recycling.”

A spokeswoman for NSW Water Minister Melinda Pavey said that until the final business case is completed, “any assessment or analysis of cost estimates, particularly by external bodies, is premature and potentially inaccurate”.

“Building dams is historically an expensive and complicated process to undertake.” she said. “That is not a good enough excuse to quit and throw our hands up in the air crying ‘it is all too hard’.

“These are critical pieces of infrastructure that will go a long way to future-proofing the Tamworth community’s water supply for many years to come.”

The Morrison government is awaiting a detailed business case for the project, which is expected to be finished later this year, but views the Berejiklian government as the primary proponent and manager of the dam project and its associated pipeline.

Ms Faehrmann said if the government believed the dam was the most cost-effective way to secure Tamworth’s water “then it needs to release the business case before any further work is done”.

Maryanne Slattery, a former official with the Murray-Darling Basin Authority turned consultant, said the cost-benefit analysis for the dam was “ridiculous” even before the latest blowout.

According to the Productivity Commission, the $484 million price tag equates to about $60,000 per megalitre, or more than 40 times the current market price. At $870 million, the ratio is about 80 times.

Ms Slattery said the problem is that the project would need to offset any extra water use from the dam elsewhere since the water in the valley has already been fully allocated. “If you’re serious about securing town water, you should just change your allowance [for other users],” she said.

Our Morning Edition newsletter is a curated guide to the most important and interesting stories, analysis and insights. Sign up to The Sydney Morning Herald’s newsletter here.

The 'Katy Keene' Trailer is Like 'Riverdale' Meets 'Gossip Girl"

Is it just me? Or could this be the summer of the singleton?