Victoria aims to cut its greenhouse gas emissions in half by 2030 and all government operations – from schools to hospitals – will be powered by renewable energy within the next four years.

The government announced its long-delayed carbon emissions reduction targets on Sunday, saying it will reduce emissions by 28 to 22 per cent by 2025, and 45 to 50 per cent by 2030. 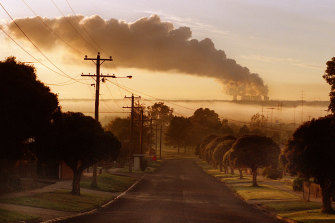 The Yallourn power station will now close in 2028.Credit:Vince Caligiuri

These targets bring Victoria into line with jurisdictions such as South Australia, which recently announced its own 50 per cent cut 2030 target, and are more ambitious than the Morrison government’s pledge to cut by 26 to 28 per cent by 2030, which remained unchanged after US President Joe Biden’s recent climate summit.

Environment Minister Lily D’Ambrosio took at swipe at the federal government, saying it could not rely on states alone to reduce emissions.

“The Commonwealth government cannot continue to abrogate its responsibilities on a global stage when it comes to climate change,” Ms D’Mabrosio said. “Nothing was more embarrassing than the display from the Prime Minister at Joe Biden’s climate summit.”

All of the state’s government operations will be powered by renewable energy by 2025, including hospitals, government offices and Metro trains.

About $20 million will be invested to reduce emissions in the agricultural sector, and about $15 million in a “carbon farming” program, where carbon is stored in shelter belt trees.

Environment Victoria head Jono La Nauze said the new Victorian targets would put even more pressure on the Morrison government to increase its “pathetic” pledges but said the state’s new targets still fell far short of what was needed.

“Victoria has almost matched the recent US pledge of 50 to 52 per cent but the science is clear – we need to act much faster,” he said.

“The federal coalition’s decade of sabotage and delay on climate has limited what can be achieved in the next decade here in Victoria and for that they must be held accountable.”

Victorian emissions targets for 2025 and 2030 were meant to be announced in 2020, but the pandemic delayed the decision.

A climate change strategy, and “sector pledges” are both also required by law. These will outline how particular sectors such as transport or agriculture will reduce emissions to meet targets.

The Andrews government commissioned an independent panel, headed by Labor’s former federal climate change minister Greg Combet, to provide advice on what its targets for 2025 and 2030 should be.

It called on the Andrews government to make deep cuts to emissions in the next decade in sectors including electricity, industry and agriculture.

These recommendations were made before the devastating summer bushfires of 2019-2020.

Recent research by high-profile Australian climate scientists, found that Victoria needs to set emissions reductions targets of 75 per cent by 2030 to meet the Paris objectives.

Victoria met its 2020 targets, with Ms D’Ambrosio saying the state had reduced emissions by 25 per cent. This was largely because of the closure of the Hazelwood coal-fired power plant.

But the Australian target remained unchanged at 26 to 28 per cent by 2030, and is significantly lower than many comparable countries.

Summertime, and the living is easy for Santas in Copenhagen