Victoria’s coronavirus testing system, swamped by the surge in new cases and the failure to provide consumers with access to rapid antigen tests, will remain overwhelmed until at least next week, the Andrews government says.

The main private providers of pathology in Victoria halted testing at 54 centres around the state this week, needing to reset their testing processes to deal with the sudden jump in positive cases. 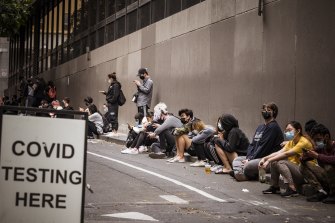 People queue on Wednesday for a coronavirus test at a Bourke Street centre.Credit:Chris Hopkins

Their labs process about three-quarters of Victoria’s coronavirus tests and have continued to push through tests taken before this week, but are not yet processing new swabs.

The closures have added to lengthy queues at the state’s remaining 206 COVID-19 testing centres, combining with the scarcity of rapid antigen tests to create the current crisis.

“It’s almost one in four now of the cases that we’re testing coming back as positive cases,” Victoria’s COVID-19 response commander Jeroen Weimar said on Tuesday. 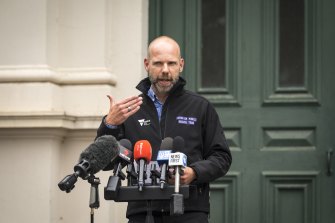 The sheer volume of people wanting tests has meant the main pathology firms – Sonic, Healius, Australian Clinical Labs and 4Cyte – need to change how they process their results. 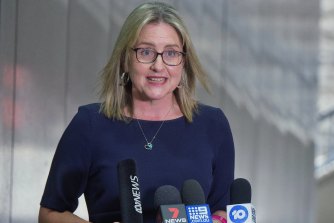 That “reset” will come too late for Andrew Cartledge in Horsham, which has had two testing centres. The town had had only a handful of coronavirus cases since the pandemic started, until Christmas 2021 when numbers started to rise.

Mr Cartledge’s daughter felt sick a week ago, and one of her friends had returned a positive rapid test, so she, along with Mr Cartledge and his wife, got PCR tested. That was last Thursday. His daughter only received her positive result on Wednesday. “She was pretty crook for a couple of days, but she’s fine now,” he said.

“The delay in getting results is huge,” he said. “One or two days’ wait, yeah okay, but for it to take a week, it’s beyond a joke.”

The Victorian Greens’ health spokesman Tim Read, a GP before entering parliament, said the state needed to urgently review its approach to testing, and how it communicated the need for a test.

“As the testing system collapses under the increasing numbers, we need to rethink the reasons for testing,” Mr Read said. “We need to preserve tests with quick results for seriously ill cases, and for health and aged care staff, but we can’t test everyone.”

He said the government still needed to understand data from the epidemic and who was getting sick. “We still need to track the incidence rate, which may mean sentinel testing systems because [the] lack of access to testing means our current numbers are falsely low.”

Stay across the most crucial developments related to the pandemic with the Coronavirus Update. Sign up for the weekly newsletter.

Coronavirus drives holiday gift spending to a 4-year low, according to Gallup poll

Hello, Your Sex Horoscope for the Weekend Is Here