The celebrity TV chef, who is worth an estimated £240million, launched his new series on the channel last night, saying he ‘wanted to give viewers as much inspiration and confidence to keep costs down and flavour up.’

On the show, he cooked up a recipes including a meatloaf, vegetable lasagne and curry, claiming all could be made for less than £1 per portion.

In order to find the cost of each portion, Jamie claimed he took the average cost of each ingredient and the quantity used at the big four supermarkets.

However many of those watching felt the programme was ‘not the strongest’ for ‘seriously understanding poverty’, with one viewer writing: ‘Bit confused who this Jamie Oliver show is aimed at. 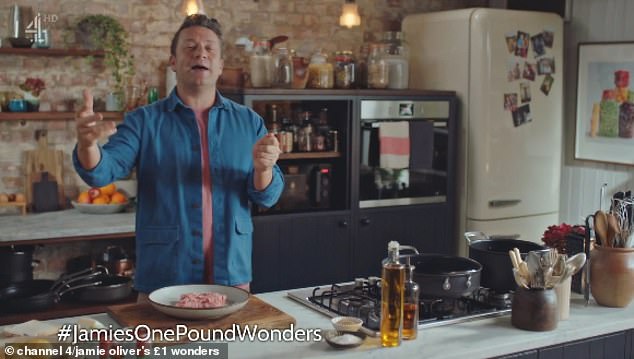 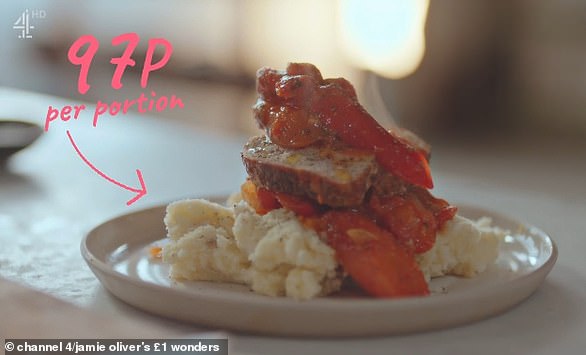 ‘With beautifully tender meat, oozy cheese and the most outrageous tomato sauce, this is the kind of food that makes me really happy. By elevating one of the cheapest cuts of meat with clever flavour hacks, this classic recipe works hard for you and your wallet. Plus, I’m cooking it entirely on the hob, so you don’t need to worry about turning on the oven. And with 2 of your 5-a-day per portion, it’s sure to become a firm family favourite.’ 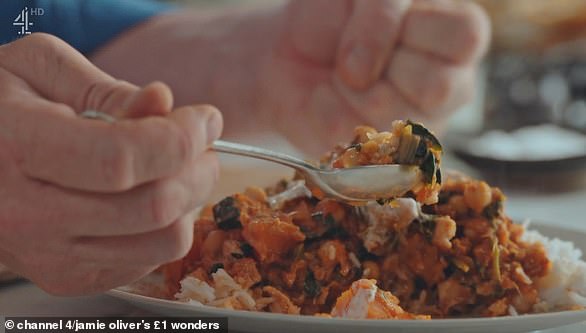 The celebrity chef went on to cook up a spinach, sweet potato and chicpea curry using just the microwave

‘I’m bigging up the humble microwave here, which is one of the cheapest ways to cook, energy-wise. Packed with flavour and lots of lovely veg, this delicious curry couldn’t be easier to rustle up. What’s more, each portion contains all five of your 5-a-day, so I’m really proud of this one. Curry night will never be the same again! ‘

Take the spinach out of the freezer and place on a plate to start defrosting.

Place the rice in a 2-litre microwave-proof dish or bowl with 1 mug of water (300ml) and a pinch of sea salt and cover the bowl with a lid or a side plate. Cook in the microwave on a medium heat (400-500W) for 8 to 10 minutes (depending on the strength of your microwave), then remove and leave to steam with the lid on.

Meanwhile, peel the onion, ginger and garlic. Place a box grater in a microwave-proof dish and grate the onion and ginger on the coarse side, followed by the garlic on the fine side.

Add the tomato purée to the dish, along with the curry powder, a pinch of sea salt and 1 tablespoon of vegetable oil, and stir everything together. Prick the green chilli and sweet potato with a sharp knife, then add both to the dish and cover with a plate or lid. Set the microwave to high (800W) and cook for 10 minutes.

Carefully lift the dish out of the microwave and uncover. Using tongs, remove the sweet potato, place on your board and slice into 3cm chunks, then stir back into the bowl. Add the chickpeas (juice and all), along with the frozen spinach, stir together, then cover and cook in the microwave on a high heat (800W) for another 10 minutes.

Carefully lift the dish out of the microwave, uncover and stir everything together, breaking up the spinach with your spoon. Carefully taste (it will be hot), season to perfection with salt and black pepper, then stir in the yoghurt.

Remove the chilli to your board, finely slice and stir back into the curry for added heat, to your taste, then fork up the rice, to serve. 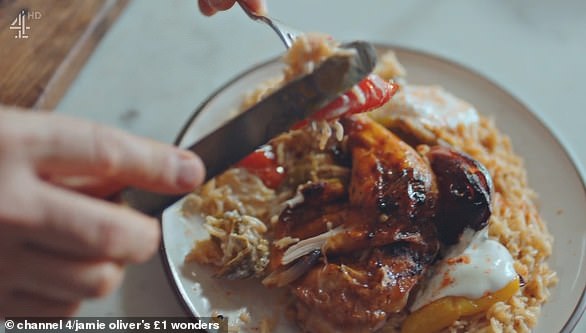 Jamie, who is estimated to be worth £240 million, described his chicken traybake as ‘full of optimism’

‘Full of colour, optimism and heaps of flavour, this one-pan wonder is a great principle recipe to have up your sleeve. By cooking the rice in the same tray, we don’t have to turn on the hob (or face a pile of washing up!). Feel free to swap the peppers for whatever veg you have knocking around – think leeks, broccoli florets or slices of courgette. Plus, it couldn’t be easier to make this vegetarian – check out the tip below for a bit of inspiration.’ 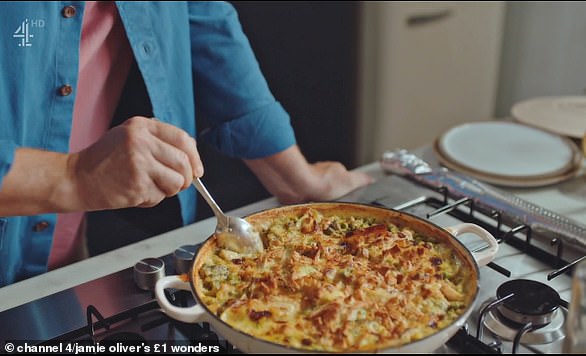 While cooking his chicken traybake, the celebrity chef also cooked up a vegetable lasagne in the oven

‘Making the most of frozen veg, this lovely rustic lasagne is a joy to make and eat. With layer upon layer of perfectly cooked pasta, an oozy cheese sauce and crunchy topping, it’s a thing of beauty. What’s more, you’ll only need one pan – what’s not to love?’ 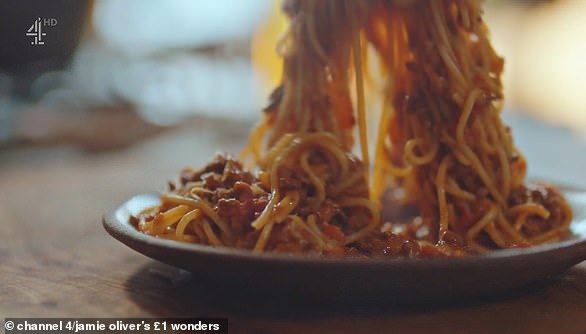 ‘Make your meat go twice as far with this batch-cook beauty. I’m using half lentils and half minced beef or pork here, which means it’s not only kinder to the planet, but your wallet, too. Plus, it’s the gift that keeps on giving – there’s so many fantastic ways to use up the leftovers. I love it tossed through pasta for a speedy spaghetti Bolognese (see the tip below), or topped with fluffy mash for a cheat’s cottage pie. ‘

Meanwhile another wrote: ‘£1 meals – what a lot of nonsense. What they’ve failed to tell you, is you’ll need to go to the supermarket and spend about £50 first.’

A third added: ‘Except these aren’t £1 wonders are they? They’re ‘sorta £1 per portion, not including stuff middlecass people have in their pantries. 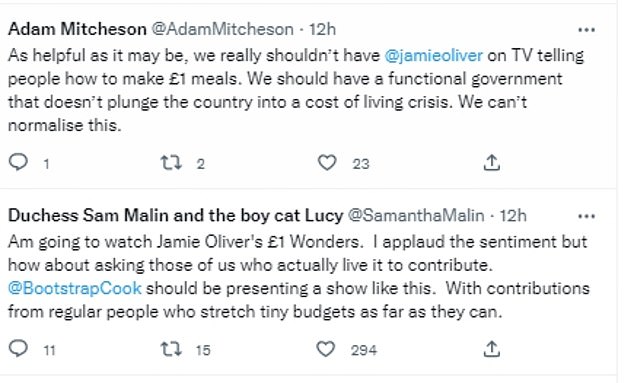 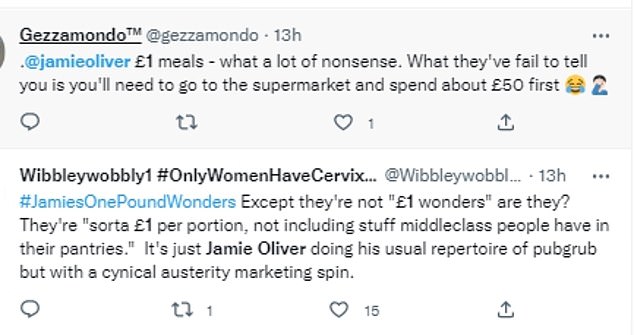 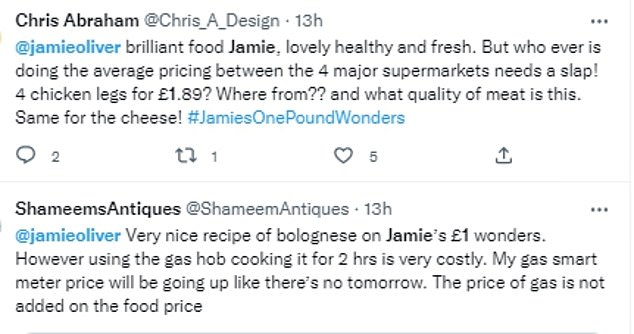 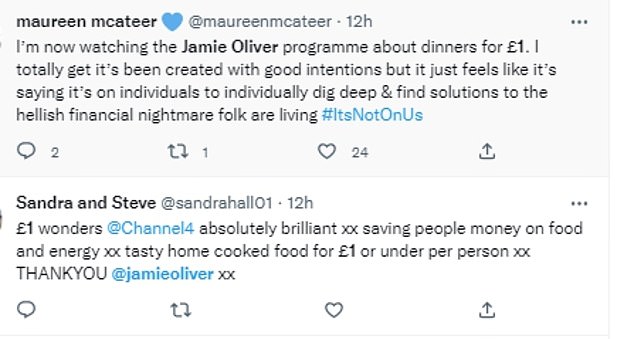 A fourth commented: ‘As helpful as it may be, we really shouldn’t have Jamie Oliver on TV telling people how to make £1 meals.

‘We should have a functional government that doesn’t plunge the country into a cost of living crisis. We can’t normalise this.’

One tweeted: ‘I’m now watching the Jamie Oliver programme about dinners for £1.

‘I totally get it’s been created with good intentions, but it just feels like it’s saying ‘It’s on individuals to individually dig deep and find solutions to the hellish financial nightmare folk are living.’ 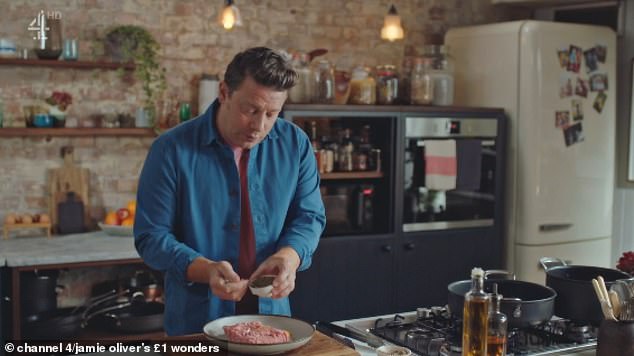 During the segment, Jamie shared a number of recipes, with added tips including advice on how to cook using the microwave, and cutting back on energy costs

During the segment, Jamie shared a number of recipes, with added tips including advice on how to cook using the microwave, and cutting back on energy costs.

Jamie said he wanted to give recipes which could ‘bend and stretch’ to give ‘many meals’ to be used all week.

With salt, pepper and oil in the kitchen, Jamie said the recipes could be made fore less than £1 per portion.

He added: ‘These £1 wonders are delicious and nutritious, and great to have up your sleeve whenever you need them.’

The first recipe in the programme was a ‘mega meatloaf’, which Jamie described as ‘a mouthwatering way to upscale one of the cheapest cuts of meat into a family favorite.’ 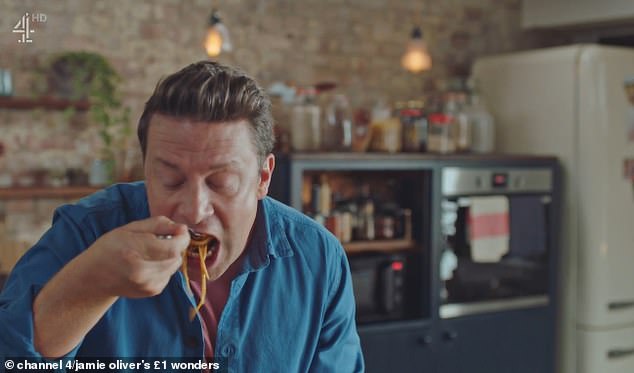 The celebrity chef insisted his recipes on the show were ‘celebratory’ and ‘optimistic’ (pictured, enjoying his spaghetti recipe)

He claimed it could feed six people for under £6.

He said: ‘With clever cuts of meat, and clever flavoring, this is a classic recipe that will work well for you and your wallet.’

Jamie said he was adjusting his cooking, from using the oven, to using the hob and microwave.

His tips included cooking on the  hob using a pan with the lid, saying it could ‘save on energy.’

Jamie described his meatloaf as ‘clever cooking which makes him happy’, saying it’s ‘optimistic’ and ‘tasty’.

Elsewhere, he struggled to set the timer on a microwave as he made a spinach and chicpea curry. 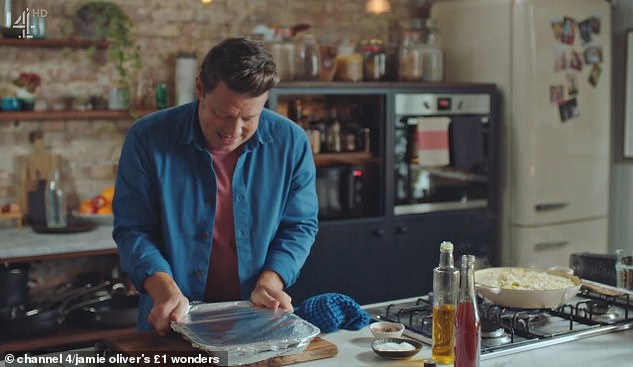 Elsewhere, Jamie also made a cajun chicken traybake and a vegetable lasagne (pictured, cooking in the test kitchen on the show)|

He admitted it ‘wasn’t cooking as usual for him’ but added he ‘does like the challenge.’

Elsewhere, Jamie also made a cajun chicken traybake and a vegetable lasagne.

The programme was released weeks after it was revealed  Jamie Oliver is believed to be cooking up a deal with Netflix as he hopes to promote his healthy eating campaign via the streaming service and his charity BiteBack 2030.

A source told The Sun last month:  ‘Jamie has ended his exclusive contract with Channel 4 and is looking to work elsewhere. A team from BiteBack is developing ideas aimed at Netflix’.

With Jamie’s production company already advertising for producers to work on ‘Netflix development’.

However in a bid to keep the star the publication reports the channel have ordered a third series of Jamie’s Mediterranean Adventures.

The source added: ‘Channel 4 aren’t thrilled about sharing Jamie but have made sure they won’t lose him altogether.’

As well as a third series of his Mediterranean adventures the broadcaster has also recommissioned Jamie’s One-Pan Wonders and Jamie’s season which will air next year.

He founded the charity BiteBack 2030 in 2019 with the aim of educating children about healthy eating.

Jamie originally joined the channel back in 2002 after originally finding fame as The Naked Chef on BBC2.