Home » Lifestyle » ‘We are all compassionate’: Ministerial decision on Biloela family within days

An imminent decision about the future of a Tamil asylum seeker family will be based on humanitarian considerations as well as health and legal advice, Deputy Prime Minister Michael McCormack says.

Immigration Minister Alex Hawke is expected to announce within days the government’s decision on whether to intervene in a long-running court dispute over the family’s bid to remain in Australia. 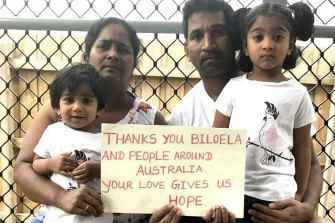 Priya and Nades Murugappan and their Australian-born children, Kopika and Tharnicaa, in a photo taken during their court fight to remain in Australia.Credit: Supplied

Priya and Nadesalingam Muruguppan and their Australian-born daughters, Kopika and Tharnicaa, have been detained on Christmas Island since August 2019 after authorities removed them from the Queensland town of Biloela.

Tharnicaa was flown to Perth with her mother last week for medical care after being diagnosed with pneumonia and sepsis.

Mr McCormack said on Monday he understood the family was being reunited in Perth this morning.

Family friends have raised concerns about their deteriorating mental health, especially that of the two young girls.

The acting Prime Minister said the government had stuck to its “clear and steadfast policy” on people who arrived on boats.

“We are all compassionate,” Mr McCormack said.

“I appreciate that many people have a view on this matter but we will decide our view, through Alex Hawke, who is the minister, with the proper oversight of this decision.

“He will make that announcement this week and he will base it on humanitarian considerations, on health outcomes and on legal advice.”

Overnight, Prime Minister Scott Morrison said from England, where he attended a G7 leaders’ meeting, that offering the family medical attention was the top priority for now.

He said it wasn’t the government’s policy to offer pathways to permanent settlement.

A coalition of peak medical groups has signed a letter to the government saying it is extremely concerned about the family’s ongoing detention.

A handful of Coalition backbenchers have also spoken out in favour of the family returning to their community, although some MPs believe the outcome should be left to the courts, given a Federal Court decision that the two parents should not be granted refugee status.

Opposition Leader Anthony Albanese said the family was very much part of the community in Biloela, about 420 kilometres north of Brisbane, and townspeople wanted them home.

“We’re a better country than this. And this family are not a threat to Australian sovereignty or Australian borders,” he said.