Home » Lifestyle » We are all VIPs: Who are the real villains of Squid Game?

To get there it will have to better the 625 million viewing hours (about 78 million views per episode) racked up by current number one, Bridgerton. For a horror show, that’s a huge number. For a horror show in Korean (or horribly dubbed, if the English-language version is any indication) it’s astonishing.

So, what makes it so special?

Though some people have lavished praise on its originality, I don’t think that’s where the answer lies. Squid Game is actually enormously derivative. Writer-director Dong-hyuk Hwang has in fact been accused of plagiarism, with the eagle-eyed noticing similarities between his series and the 2014 Japanese splatter film As the Gods Will, in which high school students are forced to play kids’ games ruled over by despotic giant dolls that murder the losers. Sound familiar?

In his defence, Hwang has claimed he began working on his story in 2008, insisting any similarities are entirely coincidental. I’m inclined to give him the benefit of the doubt – not because no filmmaker has ever ripped off another, deliberately or otherwise, but simply because the basic elements of this story predate Takashi Miike’s film by a long way.

In its depiction of blood sport as a form of entertainment, The Hunger Games is the shining example in Western cinema (and literature). But that series was itself hugely indebted to Battle Royale, the Japanese movie released in 2000 (and novel in 1999) in which a group of high-school students are taken to a remote island and forced to fight to the death. Both link their violence to state fascism, though The Hunger Games also invokes the idea of violent entertainment as a kind of opiate of the masses. 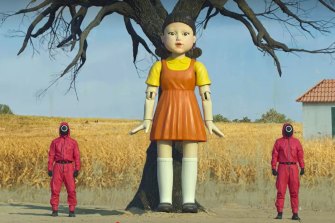 It’s child’s play: Cash-strapped players are kidnapped and forced to play deadly versions of childhood games in the Korean series.Credit:Netflix

Squid Game’s basic plotline of poor people being killed for the amusement of the rich can be found in the John Woo-directed Hard Target (1983), in which Jean-Claude Van Damme stumbles upon a hunting circle in New Orleans. The Running Man (1987) married the idea of state-sanctioned hunting of society’s outcasts (in this case criminals, including a falsely imprisoned Arnold Schwarzenegger) with televised entertainment. Eli Roth’s Hostel (2005) gave the genre a torture-porn spin, with backpackers kidnapped for the amusement of bored wealthy businessmen.

Boredom coupled with unimaginable wealth surfaces as a factor in Squid Game too.

You could arguably trace this genre all the way back to the Coliseum, but in popular fiction it has its genesis in The Most Dangerous Game, a short story by Richard Connell published in 1924, in which a hunter becomes the hunted after falling overboard while sailing in the Caribbean and washing up on an island inhabited by a sadistic madman.

There have been many screen adaptations over the years, some direct others more oblique. The most recent example is perhaps The Hunt, the 2020 horror-thriller-comedy co-written by Damon Lindelof (Lost, The Leftovers) and directed by Craig Zobel (Mare of Easttown), in which a group of wealthy Americans kidnap and hunt “deplorables”.

Though it was derided by Donald Trump in 2019 as an example of Hollywood elitism gone mad (with the result that studio Universal delayed its release), the film doesn’t actually take sides at all. In fact, it’s a clever (though gory) satire about the way disinformation and false assumptions have fuelled the breakdown of civil and political discourse in America.

What Squid Game has brought to the table is visual flair – those M.C. Escher-inspired pastel interiors, the inventively gruesome death traps in the form of oversized schoolyard games – high production values, and a Parasite-like focus on the social inequities that make the “miracle” of South Korea’s booming economy anything but for those excluded from its benefits.

The horrors of the game exist only because life outside the arena is a kind of Hell (the title of the second episode, set in Seoul rather than on the island) from which the impoverished can never escape.

Maybe audiences beyond Korea were always likely to see similarities in their societies, but COVID-19 has brought those tensions to the surface in a way that makes the show seem especially relevant, right now. It probably doesn’t hurt either that K-Pop has begun to spread its tentacles around the globe. Korea is just so hot right now.

Beyond all that, there are two tensions that elevate Squid Game. One is within the narrative, where the primacy of the individual is in direct combat with the notion of community, and where the illusion of “choice” justifies all manner of exploitation. 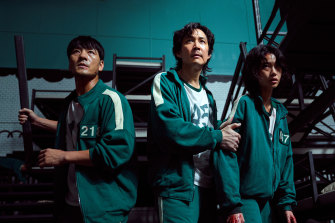 Ji-hun (Lee Jung-jae) is by most measures one of life’s losers, an unemployed chauffeur and former autoworker (sacked after taking strike action), while Sang-woo (Park Hae-soo) is ostensibly a winner, a university-educated investment banker.

The former manages to find space to think of and act for others despite his struggles and deficiencies, while the latter believes every break he gets is purely because he’s earned it. Once neighbourhood friends, each has to contemplate killing the other to win the enormous cash prize and emerge alive.

Is there a battle more emblematic of this moment than that between individual rights and social responsibilities?

The second tension exists between the show and the viewer. We are, clearly, meant to be appalled at the idea that people might be kidnapped and forced to fight for their survival purely for the amusement of wealthy VIPs. We are meant to find the violence repulsive and exploitative, the behaviour of those who pay for it irredeemable, the morality of those who orchestrate it contemptible.

And yet here we are, gladly gobbling it up, binging on the bloodfest, delighting in the evil genius of the games. Do we even register that the battlegrounds resemble nothing so much as film soundstages? This whole thing is an artifice that demands we reflect on the reality of our relationship with violence as entertainment.

And that’s the real genius of Squid Game. We are all implicated, whether we watch in horror or in delight. We are the lucky ones, granted the power of life or death over content, armed only with a remote control and a thumbs up or thumbs down.

We are the VIPs.

Your Daily Horoscope for Thursday, December 19