Home » Lifestyle » What will I do when lockdown ends? Go and see the world’s worst film

Recognise those words? If you’ve seen the 2003 film The Room, you almost certainly will, since they’re the most famous lines from what is widely considered to be the worst movie ever made.
I’m usually wary of absolute, hyperbolic claims of this kind. And when it comes to bad movies, The Room is competing in a very crowded field. Yet now that I’ve seen it for myself, I’ll admit that The Room really is in a class of its own. Or, rather, it’s in the corner of that class, wearing a giant dunce hat.

This masterpiece of dreadful cinema is the vision of one man: Tommy Wiseau, an unaccountably wealthy wannabe actor who wrote, directed, financed and starred in it, making him the supreme auteur of awful. 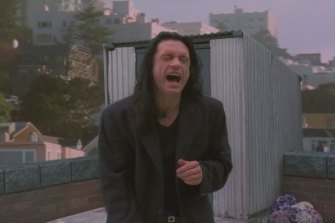 Tommy Wiseau in the 2003 film The Room. Credit:

There’s usually a bit of alchemy about great art, with all the elements coming together in just the right way, producing something transcendent. And it’s the same with The Room. Individual elements such as the script and the acting are terrible in their own right, yet it’s when they all come together that they produce something transcendently horrible. A very special kind of bad.

My film buff son alerted me to Tommy and his oeuvre a few years ago, after he’d watched The Room on YouTube. He suddenly started quoting it, laughing to himself as he dropped a weird Wiseau-ism into our conversation, in a way that reminded me of those boorish young men I went to university with, who endlessly quoted Monty Python, regarding it as the height of wit and erudition to parrot the parrot sketch. Again and again and again.

Yet my son’s Room quotes were so weird, I found them intriguing rather than tedious. So, when he asked about taking him and his mates along to a late-night (pre-COVID) screening of The Room, my husband agreed. The kids rated the event as the Best Night Ever, but my husband was also pleasantly surprised. It was not so much a film screening, as a participatory event, where people dressed up, heckled, shouted interjections, and even threw plastic spoons at the screen, referencing the film’s inexplicable cutlery motif.

Screenings like this take place in theatres across the world, and are what originally made Wiseau’s film famous, and subsequently kept it alive. Which means The Room is an intersection of two very niche forms of cinema; the so-bad-it’s-good movie, and the cult film, repurposed as an interactive event.

Back in the olden times, when I was young, independent cinemas in rickety old theatres were commonplace, and many featured regular screenings of terrible films, which you attended in order to mock and heckle. This sounds mean-spirited, but the nights in question were actually good-natured and pleasantly raucous, as everyone relaxed and laughed along; a far cry from the experience often endured at indie cinemas, which involved fighting sleep while pretending to appreciate a grindingly slow art-house “classic”.

Happily, those cinemas also featured repeat screenings of beloved cult movies, such as The Blues Brothers and The Rocky Horror Picture Show, where fans would come together and dance, role-play, and sing along. (The Sound of Music has sometimes been given this treatment, although I draw a line there, since to me, anyone who interrupts and mocks the divine Ms Andrews’ greatest performance is committing cinematic sacrilege.)

With the closure of so many independent movie houses, interactive film experiences like this were already rare. In the face of the pandemic, they’ve become non-existent. Which means I haven’t been able to attend a screening of The Room myself. We did try to recreate the whole thing at home, with my son providing the interjections and affectionately derisive commentary. And it was fun. But, of course, it wasn’t the same.

I’m no sports fan, and most live music is far too loud for my ageing ears. So, until now, I’ve not really missed the buzz of a crowd. But after our attempt at recreating an interactive Room experience, I did find myself nostalgic for the wild, late-night screenings of yore, more akin to old-time music hall than cinema, as the audience was carried away by the energy and absurdity of the whole thing.

When lockdown ends, I won’t be rushing to a concert or a football game. But when cinemas finally reopen, I’ll be there, with my wig and my plastic spoons. Celebrating the end of one inexplicably bad thing, while revelling in another.